Gazing upwards on a cold, clear night in early October, millions of visible stars stare back from the celestial darkness like pin pricks on some piece of carbon construction paper, held aloft to a desk lamp.  They shine back against the blackness, connected only by the billions of light years that separate them in the void of space.

Football feels like this sometimes, particularly during breaks for International games. Thirty-eight games separated by the vast distances of life and work and sleep and traffic jams and reruns of X-Factor. We lurch from bright spot to bright spot, awkward at times in our sub-light speed travel: a week can be an eternity after a poor result or it can be seven days to savour after a North London Derby win.

As an Arsenal fan for more years than I dare to name, I’ve grown accustomed to the feeling on a Monday morning of a dramatic belter for the win or an Eboué injury time penalty conceded. The patterns of a season are all too well known for me as well as Mrs. OG – who can expertly gauge a result based on a Sunday mood swing.

Arsenal have conditioned me – the utmost highs of a last minute Koscielny handball/offside winner are tempered by a bad run of form in February; that, for every Özil we’ve ever signed, we have an Eduardo broken leg in Birmingham.

I used to guard this conditioning carefully. The feelings of utmost joy in particular should never be relished too much, for the season is long and we’re always only a single loss away from the onset of a general malaise – the darkness being that much darker for seven more days.

How many times have you caught yourself celebrating a Tottenham loss on a Saturday only to regain your sombre demeanor in anticipation of a Sunday loss for Arsenal – as if there is causality between the two?

“Austerity,” you tell yourself, “is the best way to avoid a colossal helping of football karma.”

It’s this reserve that so often finds my default optimism punctuated with a gloomy discontent when it comes to Arsenal. But how has a team located some distance from the haunts of my youth conditioned me to feel a certain way – especially given three points are more common than none?

The logic of the thing is that despite our successes in certain moments, we ultimately fail to lift the Premier League trophy come May – and through that very Pavlovian sentiment, we rarely feel like we can enjoy those aforementioned moments.

If football is escapism – that chance to get away from the darkness even just for 90 minutes, then shouldn’t we allow those emotions to creep in? 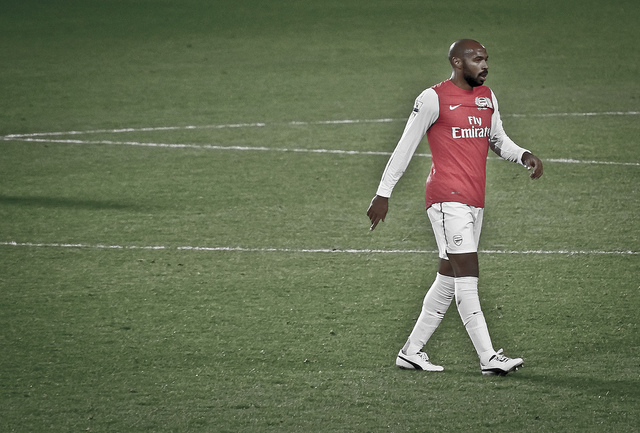 Are you capable of celebrating this without qualifying it as “only against Leeds?”  Credit Mark L under license.

There’s no guarantees for any club come May in any competition (except maybe Spurs finishing behind us) so why do we let that eventual result hang over us? We say things like: “judge this team in May,” and “we shouldn’t celebrate that last minute winner against Leicester because we’ll blow it anyways.”

While those are often very accurate statements, it’s hard to understand why we feel the need to temper our fleeting joy during the season with a relentless pessimism for what could come.

As an Arsenal fan, I’ve grown more and more aware of my own tendency to reign in celebration over a Harry Kane injury. Logic and superstition have combined into some sort of emotional governor when it comes to Arsenal results (or the schadenfreude of our bitter rivals).

But as I’ve grown more aware of this tendency, I’ve caught myself relaxing that constrictive leash. I celebrated madly at Koscielny’s winner at the weekend, I bathed in the satisfaction of our 3-0 win against Chelsea, and yes, I allowed myself a grin at Harry Kane sucking his thumb as he departed from the pitch on a stretcher at White Hart Lane.

Unlike my 6 year old self, strapped into the backseat of the family truckster barreling down a Midwestern interstate on the way to Wally World, I’ve stopped asking, “Are we there yet,” and started slowly treasuring the visceral landmarks whizzing by at 60 miles per hour.

It seems better this way – to enjoy the journey just a little bit more even if the eventual destination might fall 7 points out of first.

Football, like life, has it’s ups and downs but I’m starting to realize that I’ve celebrated an Arsenal win more than any promotion I’ve gotten or speeding ticket I’ve avoided -and it doesn’t feel right to reverse those reactions.

A season of football is 38 points of light, connected by everything else – life, family, work, religion, hopes and dreams; and we should wring the joy of every positive moment from that rag soaked in late spring shortcomings.

Spurs losing on a Saturday? Beating Stoke uncomfortably on a rain swept evening in November? A red card for Diego Costa? Jose Mourinho being hit by a meteor? Revel in each and every one without pause to worry about the eventuality of what could come next week – after all, it feels good.

I can honestly say I’m enjoying this season, not for the eventual outcome in May, but for those tiny, glorious instants that connect our emotions to 11 players on a field of forest green – and I intend to enjoy every last one regardless of what’s coming tomorrow.

OG (@hollefreund) is usually kicking around somewhere in the background here at ABW.  He edits and posts all the blogs and occasionally writes sanctimonious words both here and on his own site: smrteta.com.

Have you listened in to the latest Podcast and Radio shows?  It’s an Interlull so dig in.