Campbell’s Opportunity has Come; He Needs to Heed Those Who Came Before Him

“I am happy that [he] has left… he got praised as a great runner if he ever got back to defend three times in a game. If [he] fails to train properly twice or three times he won’t get games.”

– Berti Vogts, former Coach of Germany, on Lukas Podolski when he left Köln for Arsenal

We’ve been here before.

A strong attacking showing for one’s country in an International tournament playing centrally followed by a move to the Arsenal – only to be shoved out on the wing to suffer a death found out by a lack of defending; eventually tossed aside and moved on with little fanfare.

“I am Gooner” decried Andrey Arshavin after what was likely the most protracted signing in Premier League history.  It took a full day to confirm it, but in the January window of 2009 – the mercurial Russian was signed in, what was then, a club record deal.

There was so much anticipation for Arshavin, a mastermind for Russia in Euro 2008 – scoring 2 goals and making Team of the Tournament along the way, it looked like a big money deal would materialize for the man from Zenit.

But it never did; or at least not immediately.  Following what turned out to be a career performance in Austria/Switzerland, bids were made by Barcelona and Spurs; but no one came close to the £22m asking price inflated by a great showing.  The lack of a transfer, particularly to Barca (a favourite of Andrey’s), meant the man fell out with his club, and had to wait until the winter window to sign for the Gunners.

A wonderfully two-footed player, blessed with pace and vision, Arshavin found himself more often than not, out on the wing and not in his favoured central position behind the striker.  He still had absolute cracking games of course, but ask any Arsenal fan about Arshavin and they’ll likely describe two different players: happy, tanned, fit, scoring goals for fun, making lung-busting runs, Arshavin; and, roly-poly, can’t be arsed, pull your finger out, “women can’t drive cars,” Arshavin. 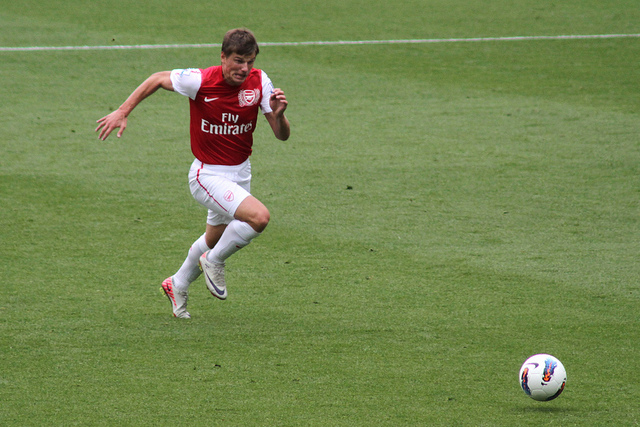 For me, I’ll never forget the four at Anfield or the winner against Barca at the Grove but he never quite bettered his first half season’s strike rate of 6 in 15 and 9 assists (all competitions).  And while the following season was decent (12 from 39) and in 2010-11, his assist rate was quite good (17 from 52) – his inconsistency and apparent lack of work rate eventually caught up to him, and he faded into terrace folklore before heading back to Russia.

Another player in this mold, was Lukas Podolski. Podolski’s International pedigree was unquestioned – even if his failed seasons at Bayern Munich were less than flattering.

At 26, Podolski represented very good business at the time. Here was a player that was the joint second top scorer in the World Cup 2006 (3) and Euro 2008 (3), a member of the Team of the Tournament in 2008 (alongside Arshavin), and the scorer of the winning goal against England in South Africa in 2010 in the Round of 16 – we should have been getting goals.

But there was an asterisk next to his name: for every International plaudit given, there were the comments from former coaches like Vogts (at the top of this article). Magath, Hitzfield and Klinnsman all failed to get the best out of Podolski at club level as well – all cited his work rate, particularly getting back and helping his defenders, as a problem.

Indeed there have been accusations leveled at Arsenal for ruining the player by not playing him centrally yet it is far more likely we discovered what was already known in Germany – especially since the Premier League is not particularly tolerant of wingers that expose their fullbacks.

Despite that, Lukas managed to net 31 goals from 82 appearances for the Gunners, a club strike rate that was only bettered by his first term with Köln between 2003 and 2006 and included a season in Bundesliga II (51 from 85).

Yes Podolski was a true predator; one that would likely excel in a two man strike partnership – but we were never going back to a four-four-two to accommodate the Polish-born German.

His impact diminished and eventually he made his way out of the club on a fraction of the transfer fee we invested in him.

Sure, Campbell had already signed for the Arsenal when he shone in Brazil 2014, but we hadn’t seen him in the red and white due to loan terms with Lorient, Real Betis and Olympiacos.

Campbell, though, represents an interesting dynamic. Hardly the first name on the team sheet when all others are healthy, he’s been given a chance this season because…erm…all others are not healthy.

Slowly the 23 year old Costa Rican has started winning over his detractors with a string of good performances on the wing. 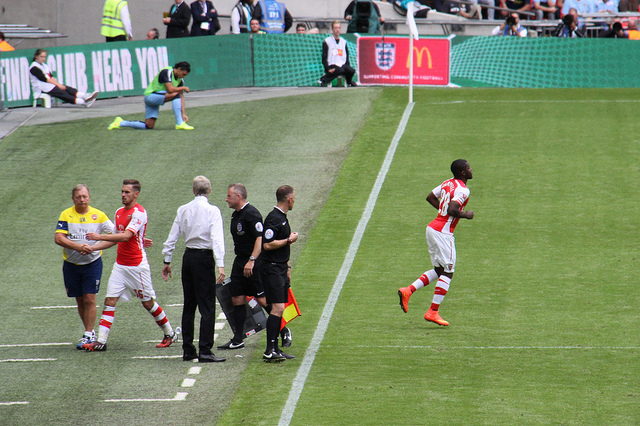 Listed as a striker for Costa Rica, we’ve done what we do with forwards that play centrally for their country, and planted him firmly on our wing (we also like to do that with central midfielders).

Campbell is, however, far from being a square peg in a round hole – often displaying an adaptability for the Ticos which sees him play across the forward line despite being listed as a number 9. He has an eye for a final pass and his movement in the attacking third can be incisive – showing a maturity to pull his man away and create space for other attacking players to move into.

It didn’t start well for Joel at Arsenal. The on-again, off-again deal saw Dick Law back and forth to Costa Rica to sign the youngster from then club Saprissa in the summer of 2011 only for Campbell to fail to get a work permit.

He eventually got his permit in the summer of 2013 but not before loans to Lorient and Real Betis in the preceding two seasons. Despite being cleared to play in England, he was shipped off again to Olympiacos for the 2013/14 season, only to register on every Gooner’s radar after scoring in the Champions League against Manchester United at Old Trafford.

Arsène Wenger finally gave Joel a chance in the Fall of 2014 but his most notable moment, was being serenaded by grumpy Arsenal fans at a train station in Stoke before once again being loaned out, this time to Villareal, in January of 2015.

This season has been different. Campbell has been given 14 starts (from 20 appearances) and has rewarded us with 3 goals in all competitions. To add to that, he’s assisted once in the league and twice in Europe this year. It is in fact his final ball that often belies an inconspicuous intelligence and a deftness of touch – he’s going to get more assists this year.

His numbers are hardly World Class but Joel has shown a marked determination to improve and work hard since his first full Premier League this season at Swansea. Despite scoring that day, he looked sluggish and one-footed at times – prompting many fans to start counting the days until he was dumped back to the bench (myself included).

He needs to continue to find his home on the wing and make it his own – there will be no formation change to accommodate the Costa Rican. More importantly, he needs to put his head down and work hard for the team because he lacks the predatory instincts of Podolski and the creative skill of Arshavin.

At 23, he still has development time ahead of him – and that bodes well in contrast to Podolski and Arshavin who were in the prime of their careers (26 and 27 respectively when we signed them). While I’m not certain of Joel Campbell’s Arsenal future, he would do well to learn a lesson that his predecessors failed at – and that is to work hard, balance defence and attack, and take the chance he has been given. So far he looks like he’s given himself a fighting chance and is figuring it out – to the benefit of the player and club.