Arsenal fans have no doubt been watching events unfold at Old Trafford this season with a grin on their face. The arrival of Jose Mourinho has not brought the level of success that usually follows the Portuguese manager wherever he goes and instead it has been a difficult start.

After 13 games United have picked up just 20 points, making it their worst ever start to a Premier League season. Already they are 11 points off leaders Chelsea and the last time they began a campaign this badly they finished 13th. The signs do not look good.

When you add to that Mourinho has already been sent to the stands twice this season, the second time for kicking a water bottle down the touchline, it all makes for a grim time up north. Even the world record arrival of Paul Pogba has failed to truly lift spirits.

But while the sight of Mourinho stewing in the stands and United languishing down the table may bring a smile to Arsenal fans’ faces, it would be wise for them to treat it as a cautionary tale.

When Sir Alex Ferguson left Old Trafford and retired from football in the summer of 2013 there was a belief that United could continue in their usual ways. David Moyes, a British manager who had worked his way up the ranks, was viewed as the ideal successor who fit the club’s traditions.

Like with Sir Alex there was clear belief that the former Everton boss could be moulded into a great by United. However quickly came the realisation that the football world is not the same as it was in the 1980’s and it is partly why, after just 10 months in charge, Moyes was sacked by Manchester United.

This is the era of the ‘super coach’ where unprecedented levels of wealth have led to demands for instant success. Owners want trophies and glory as soon as they make a change – but they also want it with an unique style.

The likes of Antonio Conte, Pep Guardiola and Jürgen Klopp offer all this. The trio have transformed their respective clubs in a minimal amount of time and all three have also imprinted their own philosophies too. Their success is proof at just how great an impact a coach can have and – no matter how big a club you are – you must get that appointment right.

But for many, and perhaps even Manchester United themselves, there was a belief that by the time Sir Alex left Old Trafford he had created such a super power that it couldn’t possibly topple from the top no matter who was in charge. How wrong we have all been.

Instead we now look at a Manchester United team playing in the Europa League with a squad wage bill that dwarves everyone else’s in world football. In the three years since Sir Alex left they have had three different managers, which is startling when you consider he was in charge for 27 years. 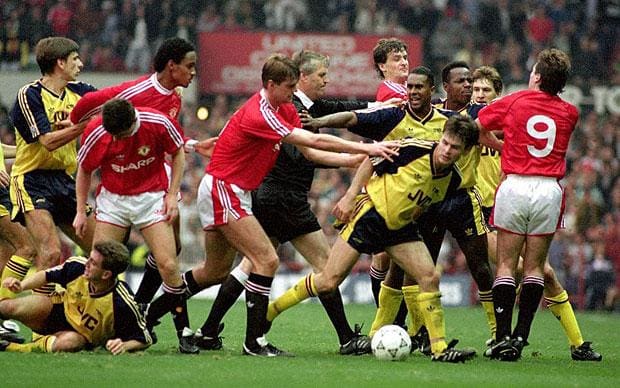 Manchester United aren’t the on-field club they once were.

It is why Arsenal fans should perhaps not look at Manchester United with glee, but instead apprehension. Like their rivals, the club is sooner or later going to have to find a successor to a man who has managed this club for 20 years.

I, like many others, am a big fan of Eddie Howe but this idea he can come to the Emirates and create a Wenger-like dynasty is a far-fetched. United tried it with Moyes and others lower down the pyramid have attempted it too but truth be told, in this era of modern football, it seldom works.

Those winning trophies at the elite level are employing the ‘super coaches’ we have already talked about in this blog, the Guardiolas and Klopps of this world. They are the ones now showing the blueprint for success, just like Sir Alex and Wenger did during the 1990’s.

It is why when Arsenal do finally say farewell to Wenger they must be looking for a manager with experience at the highest level. Previously I had thought of someone like Roberto Martinez or Howe, coaches who suit the philosophy of the club. But in reality that will not work, football has moved on and Arsenal need to too.

Someone like Carlo Ancelotti should instead be high on Arsenal’s shortlist. A manager who has coached Europe’s biggest clubs and succeeded with them domestically and in Europe.

As much as it would be great to employ someone like Howe and watch him mature into a better coach, there simply isn’t time. Manchester United have shown us that and, if Arsenal have been watching closely, they have taken notes. For as they say, a fool learns from his own mistakes – a wise man learns from others.

Check out our latest podcast and radio shows by clicking below:

We’re pleased to announce we’ve joined up with the Highbury Library, an Arsenal blogs site that is free from ads and click bait – just good Arsenal content from passionate Arsenal fans like us.  Go check them out!