Something a little different this week as Regular Bloggers Luke (@LukeIsPremium) and OG (@Hollefreund) team up to give their thoughts on drawing Bayern Munich in the Champions League.

In a completely surprising turn of events (ha!), we’ve drawn German giants Bayern Munich in the Champions League round of 16. After topping our group against Paris Saint-Germain we’d have hoped for a kinder draw but any of that hope was obviously futile and we’d have met the elite clubs eventually anyway.

This season Arsenal have looked more solid and have a better feeling of true resilience about them. Saying this straight after a very disappointing performance versus Everton isn’t ideal timing but 2 defeats in the League all season to date is very promising and shows genuine improvement from last season.

A lot of this is to do with much greater squad depth and while injuries are still frustratingly apparent it’s not as crippling so far as it was in previous years. This time last year Flamini was playing every game through this period from necessity whereas this season Granit Xhaka is starting every game in the festive period so far, not a bad switch.

Fringe players like Ospina, Gibbs, Holding, Gabriel, Elneny, Lucas and Giroud have all proven useful over the course of the last few months too, giving confidence that we can deal with injuries when they do come.

Bayern Munich on the other hand have started life slowly under new coach Carlo Ancelotti but seem to be picking up form. They went top of the Bundesliga on Saturday, riding above surprising high flyers RasenBallsport Leipzig and finished their Champions League group campaign with an impressive 1-0 victory over Atletico Madrid.

Main danger man Robert Lewandowski is in lethal form too, scoring 16 goals in 20 appearances so far this season. It goes without saying that nullifying him will be our biggest task.

It’s important we go into this tie with players who have momentum not only physically but mentally, and to have confidence and clarity in our application. Only with 11 men with iron wills playing in red and white can we really hope to best the Bavarians. 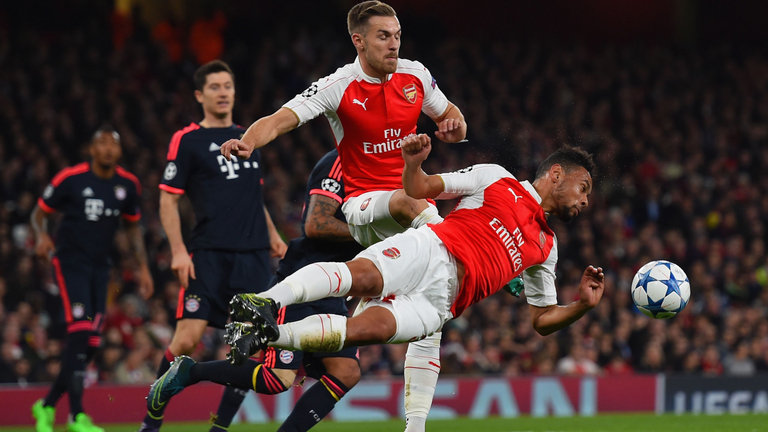 In all honesty, we’ve got no idea what is going on here. But if it helps us win over two legs in 2017 – we need to keep doing it.

As lunch was served at a popular Spanish restaurant here on Friday, the Deportivo La Coruña supporting owner cheekily asked me: “so Bayern next for you boys in the Champions League?”

I laughed, not at the prospect of drawing the German powerhouse, but at the common footballing understanding that Arsenal’s round of 16 draw will almost certainly be Bayern Munich or Barcelona – and since Barca won their group, our fate seemed inevitable.

I paid the owner, thanked him for Lucas Pérez, and made my way out onto the cold sidewalk – my mind preoccupied with the thought of another Bavarian rendezvous.

Don’t get me wrong, this is a very tough draw, but I think we can beat them over two legs and here’s why:

As my counterpart Luke pointed out above, our squad has a depth that is unprecedented in recent seasons.  Where last season we had Flamini featuring, this season we have Xhaka or Elneny.

As important as that is now, having the ability to rotate come mid-February will be critical. So much will be down to who we can put on the field for the first leg in Munich and having a larger selection, as well as the ability to go with our form players (as opposed to whomever is standing), will make a big difference.

Don’t forget the Germans will have the benefit of a Winter Break from December 21st to January 20th while our boys will be featuring in a packed festive fixture period.

Additionally, at least some of Mustafi, Cazorla, Mertesacker and Wellbeck should be back in contention by mid-February (forgive my ambiguity but it is hard to tell return dates reading the latest updates on Arsenal.com).

Going into the first leg, we have Hull at home on Saturday, February 11th and while my initial thoughts were “this is good,” a quick check of the pre-Barca fixture last year was… you guessed it, Hull at home in the FA Cup (0-0).

Still, having some form going into the first leg will be key – and a very tough game versus Chelsea away on the 4th followed by the less glamorous opposition of Hull at home on the 11th might give us a spring board to success in Germany.

Away Fixtures and Slow Starts:

One thing we are guilty of is a tie-ending home leg in the Round of 16. Recent seasons have featured Barcelona, Monaco, Bayern Munich (twice) and AC Milan and all have seen the damage done in the first leg.

One big difference this season is that we play the first leg away from the Emirates by virtue of winning the group.  While that sounds like a disadvantage given our lethargic start to these fixtures historically, it is actually on the road where we’ve had our most spirited performances (Milan aside).

In fact, over recent seasons we’ve recorded two 2-0 wins and a 1-1 draw in Munich – all of which would be welcome results looking ahead to February.

Bayern Munich is a formidable opponent but for me, this is why I want to be in the Champions League – to test ourselves against the very best.  This is one of the best Arsenal sides I’ve seen over the last decade so there are plenty of reasons to stay positive looking ahead to February.

OG (@hollefreund) is usually kicking around somewhere in the background here at ABW. He edits and posts all the blogs and occasionally writes sanctimonious words both here and on his own site: smrteta.com.