Time for Arsenal to plug the brain drain

The international break can often be a boring time for football fans. A full 10 days without their beloved club side in action and the underwhelming prospect of watching England travel to Eastern Europe to claim a slender victory.

But during this spell one tweet did catch the eye. It came from Belgium striker Michy Batshuayi, who like many pros took to social media after training to broadcast to the world about his hard day’s graft.

Most of the time these posts are merely flicked past in the blink of an eye but with Thierry Henry next to the 22-year-old in his uploaded photo, it was hard not to take a second look.

In the tweet Batshuayi joked that he had never listened to his parents like Henry and, while there was a hint of sarcasm about the youngster’s message, it was hard not to feel a sense of regret that an Arsenal prospect wasn’t posting the same.

Such a scenario may well have been the case this season, but a summer of uncertainty led to Henry distancing himself from Arsenal. Originally the Frenchman had agreed to work alongside Kwame Ampadu with the club’s under-18s, but the move collapsed.

What followed was a story which still to this day remains unclear. The sticking point seemed to be Henry’s commitment to his punditry work with Sky and it was reported that Arsène Wenger was unhappy with the 39-year-old combining it with coaching the under-18s. Other media outlets, however, argued that it was Wenger who vetoed the appointment due to a fear of having a potential successor within his staff.

Whichever theory is correct is by the by as what really matters is the fact that Arsenal have yet again let a former professional slip through their grasp. Henry joins a growing list of players who have now hung up their boots and continued their coaching careers elsewhere. Patrick Vieira is being groomed for success at Manchester City, Dennis Bergkamp and Marc Overmars are helping Ajax bring through the next generations of Dutch prodigies, while Mikel Arteta has joined Pep Guardiola’s revolution at the Etihad. 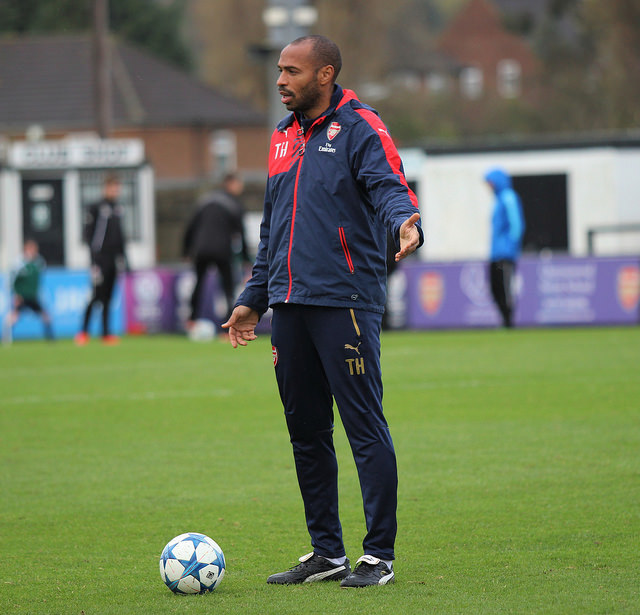 The knowledge this guy has in his head would be invaluable to our future Gunners. credit joshjdss under license

The knowledge and experience among just that quartet is hard to compete with and, while some may argue we are yet to discover what sort of a coach someone like Arteta is, the fact Guardiola has snapped him says a great deal.

Even Tony Adams is another who has flown the nest to work elsewhere. After Henry’s move to join the under-18s fell through, the former captain was the next man approached by Arsenal but a lucrative offer from China won him over. Admittedly that is hard to compete with but it doesn’t wash out the bitter taste in one’s mouth.

It just seems odd that the likes of Adams, Bergkamp and Henry can have statues outside the Emirates but they cannot secure a coaching role within it.

For Arsenal, it feels like an unnecessary brain drain – a term often used by business. By that I mean the club are losing knowledge as it seeps away to be used up somewhere else. Like water down a plug hole, it has to go somewhere and in this case it is the club’s rivals who are benefiting.

Take Batshuayi, he may be coached by Henry for Belgium but you cannot argue that the advice he gains there will not be utilised at Chelsea. The same goes for Christian Benteke when he returns to Crystal Palace and Romelu Lukaku at Everton.

Say what you like about Henry and his punditry, but a striker of that calibre must be a great coach to learn off – just as Batshuayi alluded to in his tweet after that first training session.

It is here that Arsenal must now react to change their future. Instead of allowing the likes of Adams, Bergkamp and Vieira to strengthen their rivals, why not keep these legends close at hand?

Imagine a young centre-back picking Adams’ brain on defensive situations or a striker learning from Bergkamp about how to play between the lines. On the face of it, they seem like tantalising prospects and ones that can become a reality if Arsenal just plug that brain drain.

Our Transfer Deadline Mega Podcast is out now, check it out by clicking below: