Dom (@OZGooner49) decided to enlighten us this week on preseason and before he knew it, I tricked him into blogging this information to share with you guys.  It should also be noted that this blog came across my desk before news of Jack’s injury was known, so there is no mention of it in this article.  ~ OG

So here we are again on the cusp of another premier league campaign. If you are anything like me, you’ve been walking around at half mast for the past few weeks at the thought of the season getting underway. As nice as it is to win some silverware during preseason, and to witness Arsène ghost past Mourinho like the crazy ex-girlfriend he was trying to avoid, its just not quite the same as the real stuff. While we have all been going crazy on Twitter with the silly season and spending Arsenal’s £200m ‘war chest’, the players have been hard at work on the pitch preparing for the grueling campaign ahead. This is what I want to touch on in this piece, and not in a Rolf Harris kind of way.

Gone are the days of heading off to Austria for some high altitude training and a few friendlies back in England against lesser sides. Now it’s all about trying to find a balance between a good marketing campaign for the growth of the overseas fanbase and having the players at the requisite fitness levels to launch into the season full steam ahead.

Shad Forsthye, who I’m sure we have all heard of by now, is the man tasked with getting our players in tip-top shape and keeping them that way. What seems to be a little unclear is exactly what he does. In short, he is the head of Athletic Performance Enhancement at the Arsenal. Basically, he is in charge of putting together the regime and program of all things fitness from structure of preseason training, to rehabilitation programs, recovery and in season fitness.

He doesn’t do this alone however, he has a whole team that he works with to make sure the players are performing at their best as often as possible. He has strength and conditioning specialists, physiotherapists, massage therapists and so on. The science and technology that goes into this aspect of a football club just keeps getting more and more precise and impressive. He is no doubt one of the best in the business and our boys are in very capable hands under his guidance.

The players returned from sunny beaches and holiday time (sucking on hippie crack if you are a goalkeeper) around the start of July, which gives them around a six-week block for structured preseason training. There is always an expectation that the players will maintain a decent level of fitness even when on holiday and not come back completely Bendtner-esque. So now we get to the nerdy part.

The reason preseason is so important is how it is structured compared to the actual campaign. There are no mid-week jaunts to Budapest or weekend fixtures to have to plan around, so you have complete and total focus on training. During the season, it’s very difficult to do a strength and plyometric leg day (jump training to increase power in your legs) on a Friday, only to have to play a game the next day. 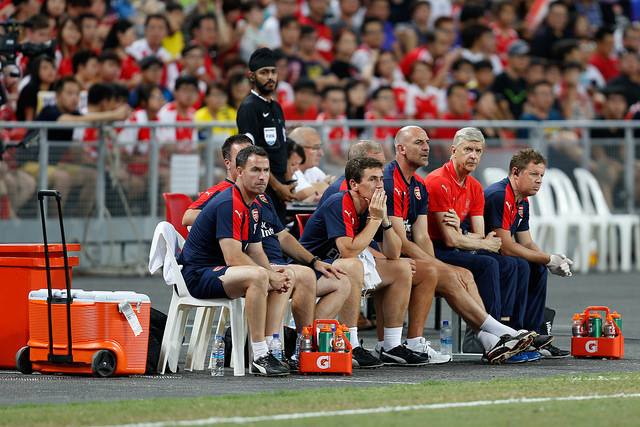 With the technology that is coming into sports science there are new ways constantly developing in regards to an athlete’s performance.

As an example; a player wakes up in the morning and attaches a sensor to their finger to track resting heart rate. Those details are sent in to the club and statisticians analyse the data. If that player’s resting heart rate is getting higher and higher each day then it’s a sign the their body is under a lot of stress and the heart has to work a lot harder to pump blood around the body to repair and recover the damage caused from training.

We’ve entered into a period where we can look at a player’s numbers on a screen to help dictate the level of training they require at any given time.

In saying that, with all that technology and science going on, when a player is subbed off after a good 60-70 minutes of playing time they go and sit down straight away. It makes me want to scream! There is a thing called “active recovery” and once one team starts doing it they all will. When a player is subbed off for tactical reasons and isn’t injured you will see them jogging up and down the pitch similar to a warm up. That is my dream anyway.

This is where the individual aspect of training has come into sports in the last few years. Gone are the days of everyone running a 6 mile time trial and kicking the ball around for an hour and heading home. The specifics of how the body is conditioned is extremely specific to what that athlete will be doing (sports specific training) to the point where different players will be asked to do different levels of training. The athletic requirements of a midfielder are very different to a centre half for example, and so training is geared to maximise each individual. So here is the long winded question to my article; what happens if you miss preseason (Welbeck, Rosicky)?

Well, as we saw last year, it’s an absolute nightmare as a player trying to train in the middle of a season to reach the kind of fitness level that having a proper and complete preseason gives you. We had players coming back from the World Cup with interrupted preseasons and we saw just how hard they found it to integrate into the season and hit the ground running. 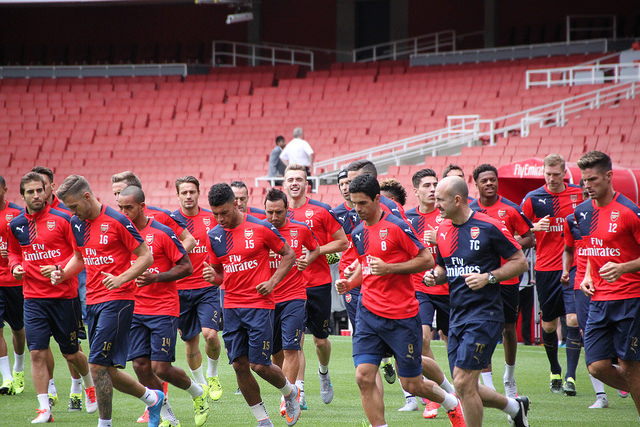 Preseason is absolutely vital to a player’s fitness. credit Danny Nicholson under license.

This is one of the worst times of the year to pick up an injury, with all that time spent getting yourself to that elite fitness base and then only to be setback to square one by picking up an injury that keeps you off the park, only to then have to start all over again once the season is underway. The exception to the rule is Alexis, that guy is an anomaly and I believe he will come back with basically next to no preseason and still be running games out no problem from the get go.

This preseason has a different feel about it for me. There is an air of confidence in the players and bar one or two injuries, we are fully fit. We cut short our overseas trip in comparison to years gone by and it feels there is an extra focus on going into the season as fresh as possible to get a jump on the League.

Don’t be shocked if we come out of the gates flying in the first 3 to 4 games of the season – I really do think as a squad we are looking that sharp. We are coming off the back of the best preseason I can remember, not just performance-wise but our fitness levels and lack of injuries make me feel very optimistic about the season ahead. That can all change in the space of one fixture as we have seen before, but as it stands it’s hard to be critical and wish for anything more.

Having so many options across the pitch and the depth in the squad will hold us in good stead. It means players aren’t under pressure to play through niggles and have time to come back when they are ready. I don’t claim to be an expert analyst when it comes to tactics but I also can’t help but feel we have gone a little more counter attacking in recent times.

What does this have to do with fitness and injuries? Well a lot. If we have the ball 60% of a game then that’s 60% of the time opposition are kicking the shit out of us trying to get it back. There is also the ‘cynical’ foul we are so used to seeing; the break up of our rhythm that goes out the window when you hit teams on the counter.

All in all we should all be feeling pretty good about where we are at right now in a fitness sense, so lets all cross our fingers, toes and eyes that we have a good run with injuries this season and we can’t use that as an excuse as to where we do or don’t finish in the League.

Come on you gunners!

Follow Dom (@OZGooner49) or tune into the Podcast and Radio show to hear his knowledge first hand.