To kick things off, we’re bringing you a special four part Bloggers’ Season Preview this week. We’ve all gotten together to write a few words on a given topic. For Part 3, we all weighed in on our transfer business this summer with each of us getting just 250 words – a tough job since we all like to explain ourselves. We hope you enjoy it and be sure to check back tomorrow for Part 4.

You can find Part 1 on our Best XI’s here and Part 2 on Players to Watch here.

He may not have been the “marquee” signing that so many hoped, but Petr Čech was some of the best business we have done at the club in years. Experienced, a proven winner, and able to mentor many both on and off the pitch, the signing of the Czech international and Premier League stalwart is a signal of intent from Arsène Wenger – but was it enough?

I imagine that many will continue the shout for another holding midfielder being brought in, as well as a striker, but first need to ask the question who – and then for how much – and then finally, why? Some people want “proper” cover for Francis Coquelin, while others would like an upgrade – both are most likely not plausible options. 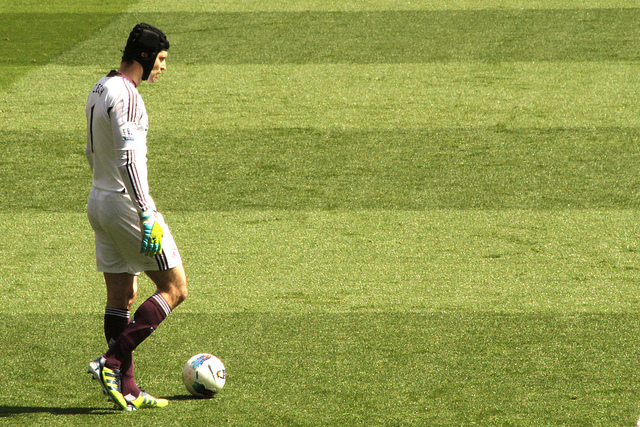 For me, Coquelin is our first choice, with Mikel Arteta, Mathieu Flamini and even Santi Cazorla or Jack Wilshere able to sit deeper should some unfortunate event befall the Frenchman. Want an improvement? It’s going to cost 50 million, and who right now would really be that much an improvement to warrant that expenditure? As for cover, why spend 20 million for cover when we have sufficient cover. Yes there is the risk of what happens if he goes down injured for three months, but that is a risk we are clearly willing to take, and Wenger is putting faith in our substantial depth.

As for a striker, you may not be his biggest fan, but for what Olivier Giroud does, there are few better in the world, and Wenger will not splash on a striker who is only as good or marginally better. With Theo Walcott primed for more time through the middle, that affords us a different option up front without having to pay for it.

On the whole, for me, the only business we truly needed to get done, we got done. Čech was the final brushstroke to the title challenge canvas – it’s all we needed.

It seems rather strange to be sat here with weeks to go in the transfer window and I’m satisfied that Arsenal have signed just one player, but that genuinely is the case. Looking back over last season the squad was not far away from achieving major success and the addition of Petr Čech is without doubt a huge step forward.

It reminds me of 2003, when Arsène Wenger added the experienced Jens Lehmann to a squad bursting with youth and creativity. Now I am not saying Arsenal are about to go unbeaten, but Čech’s arrival should provide the team with the stability needed for a genuine title challenge.

While some may moan about the lack of other arrivals the fact is Arsenal have moved on from five years ago. Wenger is no longer shopping in the £5m to £15m market. Those quick fixes, as we have seen, don’t work.

Instead the Gunners boss is only looking high-end – the Mesut Özils and Alexis Sánchezs of this world. That for me is fine. I am done with the club wasting money on mediocre players. The squad is good enough that we don’t have to buy players to make up the numbers. Unless the player will truly strengthen the team then don’t spend. Save the money for when the right individual comes available.

That is what Wenger is doing. Unfortunately this isn’t FIFA or Football Manager and you can’t just cherry pick who you want. You have to wait, be patient, and strike when the time is right. And I for one, am happy that Arsenal have opted for this approach.

Even half way through last season, I pretty much knew what I personally wanted for the squad for next season. Now the season is upon us, and we have added Čech which could prove to be the most important addition. I’d be lying if I didn’t tell you what I still wish we could have brought in more.

On one hand, we do have a pretty good squad; even if we don’t add to it. But if his ankles could hold up, who would say no to adding Marco Reus? Not a likely move at all, I think, but he’s a dream. I wanted another winger, midfielder and striker but it seems that probably won’t happen. 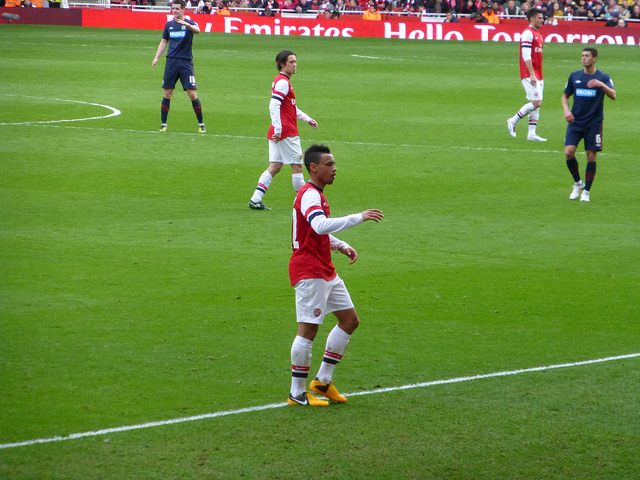 I have a soft heart for our Arsenal boys. I don’t like putting them to the wayside for just another signing. The thing is, we do have decent depth, and maybe Theo will prove to be a good striker? Maybe the Ox will become a consistent threat on the wings, and hopefully we can get a full season out of Coquelin. At this stage I don’t have an issue with Arteta playing back up to Le Coq. As an alternative, should Coquelin or Arteta not be available, it’s possible that Ramsey and Santi will have to play the two men in the middle.

I wouldn’t say I’m jumping for joy with our overall business so far. But the one bit we did do was potentially superb. I still have some mental worries Čech will spontaneously combust halfway through the season and leave us with a big hole in goal, but with the window not yet closed, anything can still happen. I do hope we get one more addition though, and my preference? – Make it a winger.

I also don’t want to put all that pressure on the Ox. If he gets injured, and Theo is doing well upfront, while I’m ok with Cazorla on the right in a free roam role, I’d rather a proper paceman. I’ve made it clear in the past, that I think a realistic target is Aubameyang and I’d love to have him.

Plenty of window to go yet. So fingers crossed we get another stellar addition.

This summer has been relatively quiet as far as Arsenal are concerned and personally I am delighted by that. The signing of Petr Čech, the Czech International from Chelsea, is simply sensational – and is a complete masterstroke.

The significance of Čech joining has the potential to be as big as Sol Campbell and Jens Lehmann arriving and could be the missing piece of the jigsaw. Čech brings to the table a wealth of experience and is a perennial winner who demands clean sheets and trophies.

The goalkeeping position at the club was something that needed to be addressed and with Čech we have a very solid looking squad. David Ospina will be an excellent number 2 and proved last year that he can be called upon, but I do not believe you can win the league with him between the sticks.

Jeff Reine-Adelaide and Yassin Fortune have been brought in from Lens but they are very much for the future rather than the present. Jeff, based on what he showed us in The Emirates Cup, may be given some involvement in the Capital One Cup and possibly more.

There are around 4 weeks to go until the window closes and with the current squad I think we have the right ingredients to go all the way in the Premier League. The squad has balance and genuine quality in all areas and many positions are not set in stone.

Great teams are built over time, that grow, learn, win and lose together and not made by simply throwing money at anybody. Twitter has become a frustrating place during transfer season with fans simply demanding any household name they can think of, with Benzema being flavour of the month. I wonder how many fans knew of Bellerín, Monreal, Koscielny, The Ox, Coquelin, Theo, and Rambo before they signed? Those players make up over 50% of the likely starting side this Sunday.

My point? Have faith in the great Mr Wenger he is building something special.

Petr Čech is an unbelievable signing.

There are so many aspects to the Čech signing that potentially set this deal up as the transfer of the summer. From his Premier League pedigree to his professional and calming demeanor both on and off the field, Čech seems to be a rare player that plied his trade at Stamford Bridge that has a bit of class.

I expect his value will translate into points on the table this season and this sole summer transfer (to date) has got fans and pundits talking about a title challenge. Time will tell but his play to date in the red and white has been excellent. 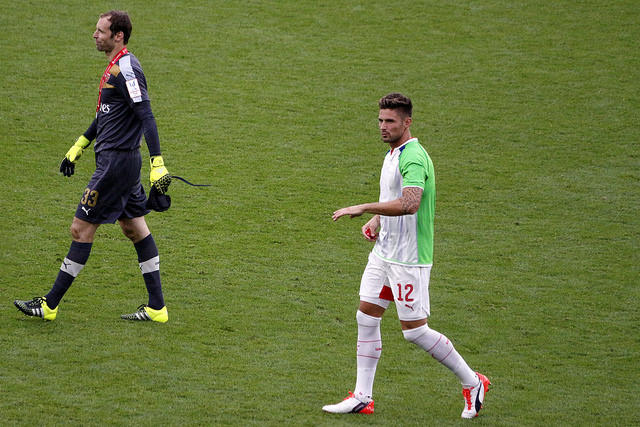 Much has been made of a world class centre forward, but is one incoming? credit: DSanchez17 under license

Looking past our new keeper, and I’d be remiss if I didn’t mention my concerns around the defensive midfield position. I’m firmly in the camp of wanting reliable cover should we lose Coquelin for a sustained period this year. We have Arteta and Flamini, double pivot options in Ramsey and Cazorla, and potential youth products like Bielik and even Chambers in a pinch but I had hoped we’d bring one more in – even if it was more a box-to-box option rather than a true defensive midfielder.

Up front, there’s been a lot of speculation about a world class centre forward coming in to compete with Olivier Giroud. Whether this materializes or not is another story so we’ll have to wait and see.

Overall I’m very happy with the squad and I think it is one that can compete domestically and in Europe this season. I do think Arsène is still looking to add at least one more player who is truly world class this window and no, I don’t think that player is Karim Benzema – but I’m not ITK.

Hopefully you enjoyed Part 3 of our Season Preview.  Come back tomorrow for Part 4 on our overall predictions for the season.