Arsenal on the Precipice

We aren’t winning the League this year.

As the embers of our flickering title challenge were extinguished by the 7-minute hat trick of Andy Carroll at the weekend, attention shifted from the fragile mentality of one last chance to catch Leicester to the reasons for our diabolical shortfall this season.

The questions have gained in momentum since conspiring to lose at Old Trafford and the subsequent insipid display versus Swansea at home. Although the signs were arguably there already, those results consigned many supporters to the inevitable outcome of a fourth place trophy (perhaps third).

This is not meant to be a damning indictment of Arsène Wenger but the mounting pressure on him is not unfounded. This season represented one of our best chances in years to mount a serious title challenge, only to be foiled by ourselves: how very modern Arsenal.

I’ve never believed that a pressing team could win the Premier League. The frenetic pace combined with English physicality and full Christmas fixture list has always stymied the idea that a system based on pressing (football, pass or man) could win the League: it was a physical impossibility in my opinion.

Yet here we stand today, not one but two pressing teams are above us at the summit of the Premier League. Proof positive that it can be done.

I’m also equally dismayed at the teams that are doing it. It is too early for this evolution in the Premier League.

If you told me that a pressing team will win the League eventually, I would have said it will be a Pep team that will do it. Perhaps even an outside chance to the gegen-press system employed by Klopp at Liverpool. But both those options are at minimum a season away.

But hindsight is spectacularly unwavering at times. No one could’ve predicted the disastrous campaign of Chelsea’s. City started the first 8 or so games like they were going to walk the League before Kompany’s injuries derailed their season only to be compounded by the bizarre Pep announcement mid-year. And United have thoroughly proven that van Gaal is not a great manager.

Hindsight will also highlight the absence of a major international tournament in the summer. We’ve only ever won the League under Wenger when it’s been preceded by a summer without the annoying interruptions of a European Championship or World Cup.

Pochettino had a free preseason to run his charges into the ground which, by all accounts, he did. A pressing team needs to be extremely fit and while Pochettino teams have a tendency to run out of steam in March, that extra time to prepare might be the difference.

I’ve heard the argument for squad rotation but the reality is that both Arsenal and Tottenham have used 24 players this season in the League; Leicester are the only team to use less at 23.

Bizarrely, we competed well enough against those pressing teams, besting Leicester in both League contests and drawing against Spurs in our fixtures both home and away.

It’s hard to look past the systems of Leicester and Tottenham and not think the League is on the verge of another tactical evolution. Long ball football gave way to physical 4-4-2’s which in turn saw the emergence of lightning quick counter-attacking football. Most recently we’ve seen the possession based 4-3-3 and 4-5-1’s.

The League is changing again and the success of Leicester and Tottenham this year will highlight that. Klopp has steadily improved the underpinning pressing play of Liverpool, and a transfer window and proper preseason will see another leap forward at Anfield.

Pep is bringing his distinct pressing style to the blue half of Manchester and while it will take time to bed the new system, as well as integrate the necessary new players into the squad, Manchester City will win the League under his guidance within two seasons. 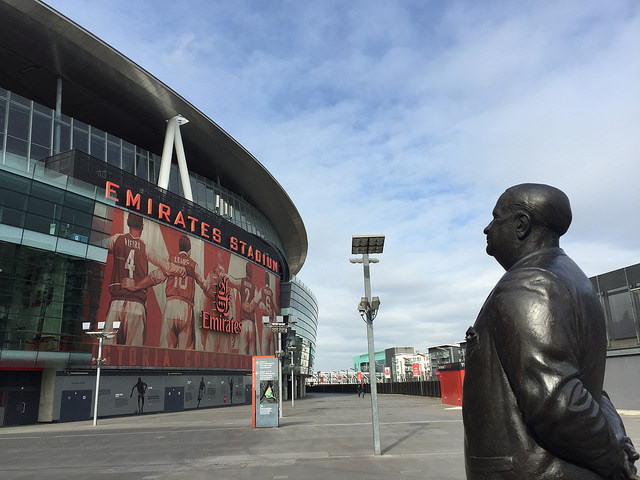 Arsenal are at a crossroads: we must move forward. Credit Andrew Travers under license

That isn’t hyperbole. He has every resource available to him to do it and he coaches a system that is immensely successful – imagine Leicester or Tottenham with 200 million pounds to spend and a better manager: it’s scary.

Meanwhile we stand at the edge of a precipice. We have not improved this season and most alarmingly, we don’t look like that will change anytime soon.

Watching Arsenal this season, I’ve been struck by the lack of any recognizable style. We’re most effective when we play defensively and deploy a quick and decisive counterattack. In recent seasons we’ve been immensely successful when we’ve scored early and then defended vigorously – comfortable to hold teams at arm’s length and let them rain ineffective shots in from 25 yards.

But this season we’ve looked ponderous in possession; too slow in the build-up and easy to defend. We’ve been unbalanced as well – both front to back as well as side to side. Coquelin’s injury killed any semblance of defensive stability but equally important, losing Santi removed our platform for attack.

Aaron Ramsey got his chance in the centre of the park but his positional awareness at times was calamitous. I really like Ramsey and I get uncomfortable when I explore the thought of him at another team with an emphatic pressing style.

Think about this hypothetical question: would Aaron Ramsey be a better player under Pep Guardiola for example? Actually, let’s scrap the Pep love-in for a second and ask that question differently.

Would Aaron Ramsey be a better player playing next to Kante under Ranieri? How about under Pochettino next to Dier?

I know this is sacrilegious and preposterous but there is a point: would a positionally disciplined pressing system that rewards boundless energy be a better fit for the Welshman?

You see why I’m uncomfortable.

Looking ahead to next season I’m confronted with a number of questions: are we capable of adapting a strong playing style, how will the Euros impact teams’ preparations, and what new signings will Arsenal go for?

I don’t know if Arsenal are capable of regaining an on field identity under Arsène. We’ve had breathtaking sides in the past but all too frequently this season, we’ve been unrecognizable (Manchester United at home a notable exception).

It’s condemning to note that both Leicester and Tottenham have been better than the sum of their parts due to the vision, technique and systems employed by their managers. I can’t say the same for Arsenal: Arsène Wenger has been outfoxed.

I also think it’s not unreasonable that teams that have players at the Euros will not have a strong preseason; and that must surely be an ingredient to the success of any pressing team. So it isn’t impossible to see Tottenham and City having slow starts next year.

Leicester, if they can keep their team together (which is a debate) and stay healthy, could have another strong season based on the simple fact that they are amongst the Premier League teams sending the fewest to France this summer. That prediction could be tempered by the new experience of a Champions League campaign.

But where does that leave Arsenal?

I’m convinced we’ll see some new faces come August but will it be enough? We’ll certainly suffer the effects of the Euros with many of our players set for the tournament.

I’m also sure that we won’t do enough next season to throw off the shackles of some of our more systemic problems. Things like injuries, mentality and accountability from the board have been the subject of many blogs and all impact on field performance.

Arsenal have always been bold in their decisions to be forward looking, from white sleeves and the W-M, to state of the art training facilities and the new shiny stadium. Now though, we are at an impasse: we’re watching a new style of football encompass the League – and we certainly need something to change for us to challenge again at the very heights of which we’re capable of. We need to move forward.

Have you listened to our latest pod and radio show?