Posted on 31 August, 2014 by A Bergkamp Wonderland

I should caveat from the start that I’m not suggesting I think Falcao to Arsenal is likely or that any “source” has suggested this to me, I’m merely trying to tackle a few of the reasons people are giving for an agreed belief that Arsenal wouldn’t be interested in Falcao due to the cost. These beliefs include:

He’s too expensive for Arsenal.
Arsenal wouldn’t spend that sort of money on a player.
Arsenal would be crazy to spend €20m on a loan deal.

I have suggested that, whilst Falcao is clearly an expensive asset to simply rent, a 1 year loan deal in principle could make sense financially and for sporting reasons. It is said that Monaco, for FFP reasons, are desperate to get Falcao’s wages off of their books for the next financial year as they don’t want to suffer any of the 10 disciplinary measures that can be imposed by UEFA on Clubs that have requested to be eligible to play in a UEFA competition.

I suggest that using the break-even metrics that are used to calculate whether a club is in breach or not of being in line with FFP legislation, and the way teams have to amortise the book value of a player, Falcao at €20m for one year would cost Arsenal the same as what Mesut Ozil costs.

Arsenal signed Mesut Ozil last year on a 5 year deal for £42.5m. For profit & loss reasons, the value of that asset and its subsequent depreciation has to be recorded over the course of the period. Regardless of if Arsenal (in theory) handed over £42,500,000 in one lump sum, only £8,500,000 will be recorded as a loss in depreciation in year 1 (42500000/5). This remains consistent for the 5 year tenure of the contract (if Arsenal don’t sell). This also means that the book value of Ozil depreciates by £8.5m each year so after 1 year of his contract at Arsenal, Ozil’s accounting value is £34m – year 2 is £25.5m and so on until his asset value is technically £0 after the five years when he is free to leave the Club. If after 2 years, for example, Arsenal sold Ozil to Bayern Munich for £40m, even though Arsenal would receive £2.5m less for him than they paid, they would technically record a profit of £14.5m under the rules of FFP. This is his theoretical transfer value of £40m minus his book value of £25.5m = £14.5m profit.

We should also consider that wages are accounted for as a cost on the balance sheets of football clubs and therefore both the cost of depreciation of a player’s asset value and their wages make up the total cost of ownership to the club. There are other costs such as insurances etc, but let’s keep this simple.

If Falcao joined Arsenal on loan for one season at €20m (and all of the cost was used to cover his salary as media reports are claiming), then his cost to Arsenal would be €20m – or, broken down weekly, £305,769. This would be reflected as a loss of €20m in the annual accounts. However, as Monaco would still hold the asset given we’d be technically renting him, Monaco would still incur amortisation on his book value. This means in terms of total cost of ownership, Falcao would only incur a salary cost and no amortised costs to the book value of him as an asset. This is not the case for our other superstars such as Ozil and Sanchez, who we incur both a salary cost and amortisation cost on. 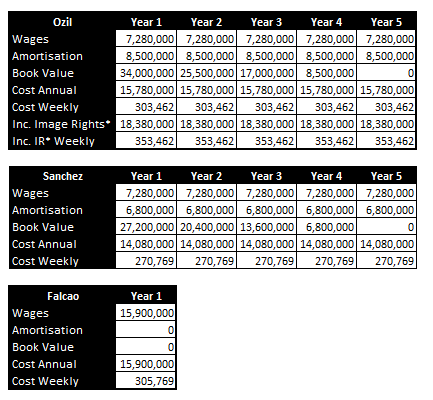 Whilst it is true that Falcao would become Arsenal’s greatest earner, it should be remembered that FFP accounting for break even metrics concern themselves with a Club’s wider accounts and take into account the total cost of ownership of a player (ergo losses to the balance) into consideration.

Whilst Ozil would have a sell on value which Arsenal wouldn’t gain from a loan player, there also wouldn’t be any subsequent loss on depreciation of Falcao’s value within the periods of the next FFP round of fines – it should be remembered that break even metrics are counted for over time periods. It’s hard to see how much of a transfer fee Arsenal could recoup on Falcao if they purchased him today on a 4 or 5 year contract but for the purpose of this blog, there’s no point trying to guess what Arsenal could or couldn’t get for him.

I hope this clears a few things up.

You can find out more from this 93 page report published by FIFA.

This entry was posted in NewsNow and tagged Amortisiation, Arsenal, Falcao, FFP, Özil. Bookmark the permalink.