Welcome back to Stick or Twist – a new regular Tuesday blog from #ABW Chief Blogger, the Other Geoff.  The concept is simple – OG will pick a few topics each week and give his thoughts followed by a verdict using the terms STICK or TWIST.  Then you get the chance to vote and let us know if you agree.

Héctor Bellerín’s assured performance against Liverpool on the weekend was a world away from that 0-2 loss to Dortmund in September.  Our latest right back is still young (as his tackle to concede the penalty proved), but his progress this season has been dramatic.

And therein lies the rub.

Bellerín clearly looks to be the future of Arsenal – and rumours that he’s shunned advances from his childhood club Barcelona to sign a contract extension, back that theory. But where does that leave Carl Jenkinson?

Jenkinson has looked excellent for West Ham this year in the games I’ve seen. His performances have been classy and relatively mistake free – he looks to be benefiting from first team football. Perhaps it is an assumption, but I daresay that this was precisely why we sent him on loan in the first place.

I’m also confronted with the reality that Bellerín’s emergence this season is not entirely a surprise to the club – he’s been exciting the more astute at youth levels for the last few years.  It is possible however, that his rapid progress has caught us off guard a little.

So what’s the plan?

Hypothetically, we could have three right backs to start the season next year with Debuchey also contending for the position. Don’t get me wrong, this is a nice predicament to be in. Realistically though, we probably only have room for two – so who’s on the outside looking in?

The short term view would be to sell Jenkinson and run with Debuchey/Bellerín for the next couple years. But longer term, that story doesn’t hold up. Debuchey is no spring chicken and while I think he is a fantastic defender and will be for another few years, beyond that a right back combination of Jenkinson/Bellerín has me licking my lips.

I’m extremely grateful that I don’t have to make that decision. If pressed, I’d make a plea to Carl’s Arsenal infatuation and convince him that another two seasons of loans are best for him and us – but that likely isn’t realistic for player or club.

I’m curious as to what you guys have to say, so I’ll be watching this poll carefully.

Verdict: STICK – I think next season’s best right back combination is Debuchey/Bellerín – even though that isn’t a long term plan.

I’m not fooled for one minute with all of this “Cup Kit” malarkey.  At the end of the day, a Cup Kit is really just a “rebranded” third kit which we seem to only wear in…erm… Cups. The cynic in me would say at least we play in cups where the third kit can be featured but beyond that, I’m not sure what there is to get excited about.

We’ve had third kits for some time now, and I’ve only ever seen them as a profit maximizer for kit manufacturers.  I suppose they are a good way to recoup the monstrous sponsorship fees on offer for kit deals; and if the money from those deals help us compete on the pitch – I’m all good with that.

With the Puma deal, we’ve seen kits change to a one year refresh cycle, and again – I get it. But with a one year refresh, the challenge is on the Club and manufacturer to come up with different designs annually in order to push product out for sale.  As a consumer – I’m not too concerned with this as I don’t have a desire to buy all three kits each year – and as long as the home kit remains red with white sleeves – I’m okay with that.

Enter the rumoured third kit for next season: 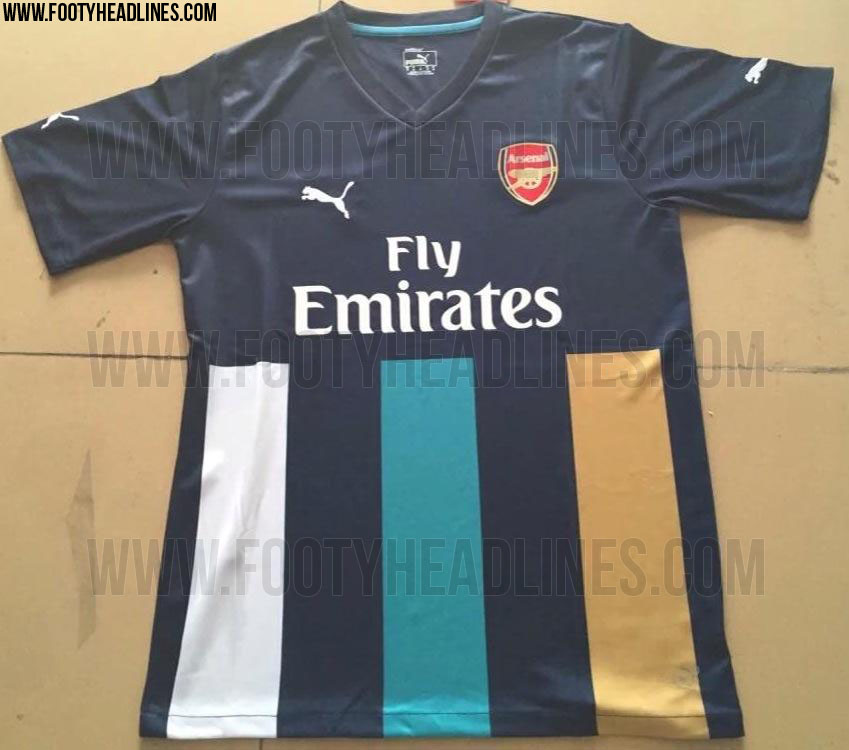 Forgive me if I pause all of this sensible talk for a second and puke a little in my mouth. I’ll give you that there is a slight chance that this isn’t the real deal, and this could all be for naught – but what is this?

Once you settle your nerves for a second, the sense will come back.  If that (my finger is pointing at the picture) helps us win the league next year – then I’m good with it.  It could even prove iconic if a major trophy is secured whilst wearing it.

And that’s really the point isn’t it?

Cup kits = more money = the chance to compete at a higher level.

If, however, we use that money to buy Kevin Doyle and Salomon Kalou – expect a rant.

Verdict: STICK – I don’t care what our third kits look like if we win a major trophy in them.

What a season this has been – and more twists are surely on the way.

For those of you that recall, I did a season preview right here on this very site.  Here is the final paragraph from that piece:

“Our genius has been composing his own complex masterpiece too. Arsène Wenger has assembled a beautifully well rounded squad – one capable of challenging on all trophy fronts this season; he’s addressed our injury concerns by bringing in one of the most talented fitness experts in the world; he’s got a team with a distinct tactical Plan A and B that can soak up pressure and counterattack with dynamic pace OR press high up the pitch and maintain possession; and we’ve got three World Cup winners in the squad to add the experience and composure to win trophies.”

Clearly I was the optimist.

After a dreadful start to the campaign, complete with too many draws and injuries (in equal portions I might add), Arsenal were well and truly off the pace and I found myself second guessing my preseason expectations.  Had last season’s sustained run at the title been a blip?

Listening to so many give explanations on where the season had come apart, I was confronted with a statement time and time again – that Arsenal fans’ expectations were “too high.”  The context of this statement was that we shouldn’t expect to be competing with teams investing a lot more money than us.

This didn’t sit well with me to be honest – mainly because my expectations were to challenge for trophies on multiple fronts, but also because I felt that our problems were mainly of our own doing.

Yes – many injuries were unavoidable; but our defensive shortness meant an unsettled back five for the first third of the season – and I am of the opinion that goals conceded is the most consistent indicator of league position (perhaps another blog).  Additionally, sticking with a 4-1-4-1 was somewhat inexplicable given the 1 in the defensive midfield position was our weakest position on the pitch.

These problems had me questioning the boss, as well as the club – and I think many were in the same boat. That said, I have always stated that I’d love to see Arsène win the League one more time before retiring – it would be a moral triumph above all else.

Don’t get me wrong, this isn’t some sort of “I told you so” piece where I reaffirm my views on the manager in light of our current form.  Our current form does, however, lead me to believe that my initial expectations weren’t far from the truth: we should be challenging for every competition we are in – and that isn’t something I should feel bad about.

Verdict: STICK – Expect great things from this club – we are capable.