The evolution of Alexis Sánchez

Alexis Sánchez week by week is growing into the centre forward we’ve been waiting years for. Many have long called for him to get an extended run centrally whilst others have passed him up as “not a striker” entirely, but now we’re seeing the true colours of El Niño Maravilla – a transformation that could end up rivaling that of any player in Wenger’s tenure and the options it gives us should fill us all with great hope.

Alexis is now in his 3rd season in the red & white of Arsenal and in that time he’s struck 55 goals and given 31 assists in his 113 games – most of those whilst operating from the left wing. A deadly maverick of a workhorse that is constantly hell bent on playing football and winning football games, he has a hunger that I could argue has never been seen at this football club before. In this new central role I believe we will see the best of him and introduce him to a new pedestal of leading players in the world.

You can draw many parallels between Alexis and Luis Suárez. Suárez didn’t look like a natural premier league striker in his opening few years at Liverpool and it wasn’t until he partnered Sturridge in Brendan Rodger’s diamond formation that we saw what truly was to come from him. Since then he’s become the best number 9 in the world and I doubt many would argue against that.

Alexis also proved many of his striker credentials in a strike partnership when playing for Chile with Eduardo Vargas. You could also say there is evidence that in a lot of games last season we played with more of a diamond shape than a 4-2-3-1 when Walcott played up front.

Even in the first two fixtures of the season against Liverpool and Leicester the frustration around Alexis being our main threat through the centre was obviously in the air as the early days of his conversion looked blunt – but since then he has adapted and perhaps even more important the team has adapted to Alexis. 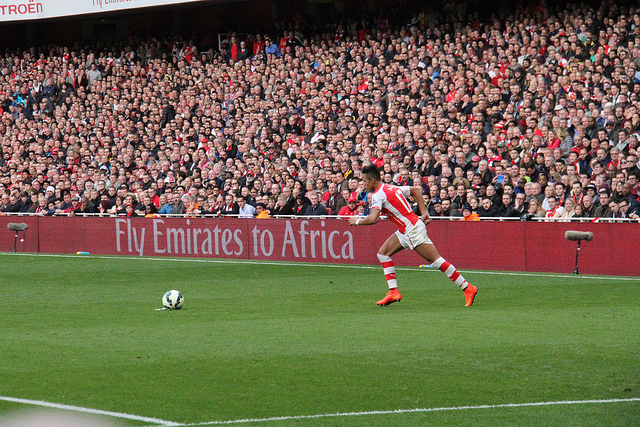 Alexis has looked other-worldly at times this season. Credit Ronnie Macdonald under license.

How the team operates around Alexis

Alexis is known to vacate the most forward spaces in the true fashion of the modern day false 9 and in those moments it’s important that other players know to take up that space to prevent our attacks lacking purpose. I believe this is part of the reason for the resurgence of Theo Walcott’s Arsenal career as he can play in periods as the furthest player forward without needing to play with his back to goal, something that was the undoing of his attempts as the lone striker last season. You can also see notably more effort from Mesut Özil to run beyond the defensive line rather than just trying to find pockets of space in-between the lines.

It’s the Alexis and Özil partnership that could reshape how we play for hopefully the coming years. Right now we play a game based on those two being the furthest forward, closer to a 4-4-2 than anything else. This puts our most dangerous players in the most dangerous positions but there’s still question marks in the line-up that need to be sorted out.

The centre midfield pairing has been a headache this season and we still seem no closer to knowing what partnership we want to go with. In the last game versus West Ham we played with Xhaka and Coquelin which has potential of an understanding – Xhaka is now the brain and Coquelin pushes forward to create turnovers along with having enough work rate and mobility to help cover the defensive ground Xhaka’s mobility prevents him from reaching. The absence of Cazorla has, in recent weeks, shown how important it is that we now give Xhaka a real run in the team and allow him to adapt through minutes on the pitch.

The other position we keep rotating in is the left wing. While Iwobi ticks most boxes he doesn’t protect the ageing Monreal anywhere near well enough and it makes that wing a blinding weak spot on the counter-attack. Chamberlain has shown good signs there in the last two games and hopefully he can grow in confidence from that but I still feel the job isn’t being completed. Without the all over creativity of Cazorla we ideally need one of the wingers to tuck in as the 3rd central midfielder and help Xhaka and Coquelin build and control the game.

In the West Ham game it was only when Ramsey came on and played on the right wing that we truly took over the game and looked comfortable, perhaps Ramsey playing on the left is something we can give a real audition to at some point in the near future (I don’t think we should read too much into a performance against United with a broken toe.)

The importance of focusing our team around getting the ball to Alexis and Özil is tenfold. In recent weeks we suffered with fielding centre midfield partnerships like Coquelin and Elneny, both are honest and hardworking but their inability to play the ball through midfield put us under so much pressure and neither was able to take control.

It does feel like we’re on the cusp of a truly well oiled machine that could have defensive stability and lethal attacking threat. The pieces of the jigsaw are being tested week by week and hopefully it’s only a matter of time until the right places are found. With Manchester City coming up in a few weeks we don’t have much more time to waste.

Podcast? Radio show? Click below, we have you covered.