The Ins and Outs of Mohamed Elneny

Well ladies and gentleman, we’ve announced Mohamed Elneny.  The 23-year old Egyptian international comes to us by way of Swiss giant and Champions League regular FC Basel.  After spending two and a half seasons in the watch making capital of the world, he brings a reputation of being arguably the most vital piece of the midfield jigsaw puzzle of his former employers.  But is the move all that it seems?

Surely the quality is there, as it is unlikely that Arsène Wenger would stump up the funds in January if he felt the player could not make the grade at the Emirates, but the “problem” is that he just may not be the type of player you’re expecting amid the fact that Francis Coquelin remains out for another month at the minimum.

When Coquelin went down injured, it’s true that the entire Arsenal world let out a collective expletive and many felt that our season had just ended.  While Mathieu Flamini has come in and done a serviceable job in his stead, many still feel Coquelin’s influence, especially his ability in the tackle and growing physical presence, is still very much sorely missed – this is something I very much agree with, and it was evident in the 4-0 drubbing we suffered at the hands of Southampton not long ago when Victor Wanyama remembered how to play football.

It’s true that Elneny is predominately a holding midfielder, but the other fact that remains is the reality that he’s not the swashbuckling no-holds-barred type of holding player that Coquelin often tends to be for us in the center of the park.   It may not be what you’d like to hear, but Elneny is a closer comparison to Aaron Ramsey than Coquelin, with certain similarities that will be of great use but also some differences that could provide a hurdle or two.

Much like the Welshman, the newest addition to the Arsenal midfield has a superb engine as well as a work rate that makes him far more adept to the box-to-box role than the “sit and shield” role many may be coveting.  In addition, he very much relies on his discipline in positioning rather than tracking back and putting in a crunching tackle a la Coq.  He certainly won’t back down physically but he’s also not the type to physically impose himself on the midfield – but you should still not underestimate how strong he is both off and on the ball.  The long and short, is that he is much like a utility SUV that has sleek lines and an excellent motor…but he didn’t come from the CAT production line.

But how is he on the ball and in possession?

Courtesy of Ahmed (@GizaGooner), friend and follower of ABW, I was able to sit down with him and talk about what Elneny brings to the club when it comes to his actual ability beyond his physical attributes.  Being Egyptian and having seen him both domestically, for the national team and during his time at Basel, he was able to shed quite a bit of light on the player and making it clear as to what we should all expect.

While Ahmed said I was spot on when I said both him and Ramsey were alike physically, he commented that their actual attributes as footballers differ.  Ramsey, he stated, likes to try to pick a Hollywood pass every now and then as well as use his technical ability on the ball to get past his marker(s) when the opportunity arises – Elneny is very much the opposite.

Unlike Ramsey, Elneny is a simple player – always looking for not just the simple pass option, but also always the most obvious one, which is clearly both a blessing and a curse.  As Ahmed remarked, if you put yourself in the shoes of an opposition player, the pass you’d expect him to make is the pass that he will make, and at that point he becomes a little easier to deal with in possession because more often than not you may know what to expect when he is on the ball, especially because he’s not the type of player to want to try to beat you off the dribble.

On the upside, however, his desire to play it simple means that he often times will pick out a simple long ball that we as a tactical unit so often times negate as the right option given our culture of keeping the ball under our control as much as possible.  So, like I said, he could end up being a delight but also a source of frustration when he has the ball at his feet.

As for the rest of his personal dossier, he’s at the required level of technical proficiency that players coming into the club are expected to be at, else Wenger surely would not have pulled the trigger on the move.  Perhaps the only final concern is his mental strength, which is a bit of a grey area with us as a club.  While everyone from top to bottom preaches about how strong we are in that regard, the truth of the matter remains that there are plenty of examples that show we are not as strong as we think – the recent draw against Liverpool being a both a prime and recent example of this.  Failing to show up early doors saw us played off the park, only for us to show the strength to storm back and eventually take the lead…and then only to switch off in the final critical moment (ironically in midfield) that lead to their late equalizer.

How does this tie into Elneny?  Simple; he’s a player who is very much all or nothing, according to Ahmed – brilliant when he’s on but nonexistent when he’s off, and never being at 50 percent…all or nothing.  Perhaps that comes down to the fact that he is still only twenty-three and has yet to play week in week out at the very highest level, but it’s something we will have to realize and accommodate for until he is truly bedded into life at the club and at a standard he has not yet tested himself at. 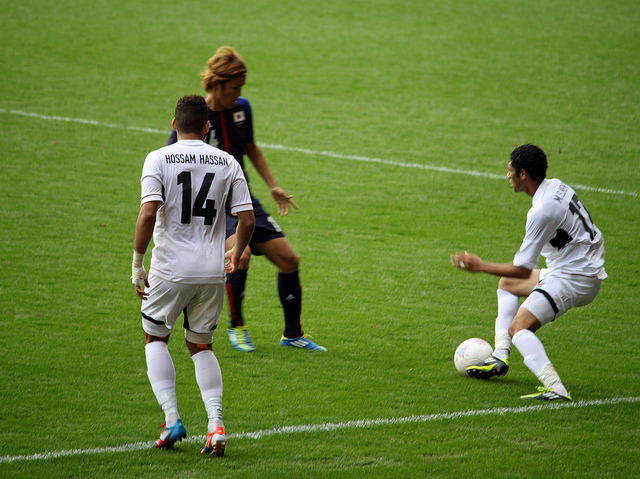 Elneny (r) in action for Egypt at the 2012 Olympics. Credit: Simon Williams under license.

Given what we have learned about Elneny in both physical and technical footballing attributes, we can perhaps begin to look at what it may mean tactically for us for both the rest of this campaign and those yet to come.

With the knowledge that Mikel Arteta and Mathieu Flamini are both likely finished come the end of the season, and the notion that Santi Cazorla isn’t getting younger and may also very much picture himself finishing career back in his native Spain, Elneny is as much a signing for the present as he is for the future.  His similarities with Ramsey (engine and work rate) make him the prime player to either replace Ramsey in the middle alongside Coquelin if Wenger wants to put Ramsey back on the right, or, as a very strong rotational option in the XI given the hectic schedule we always find ourselves being anointed with.  It also, however, provides tactical possibilities for the current season until our ranks are reinforced with our other midfield options.

Given that both Ramsey and Elneny are, ideally, box-to-box players, it doesn’t mean they cannot be used in tandem in the same tactical deployment…it just all depends on the instructions from the manager as well as their ability to remain disciplined on the pitch.  The major criticism of the Ramsey-Flamini partnership we’ve relied on is that Ramsey is so often not defensively responsible enough and, despite that reality, Flamini still ventures forward far too often and doesn’t shield the back line consistently enough.  Perhaps he wants to end his career with a bang or perhaps he just doesn’t care enough seeing as how he’s the best option we have for that role and he’s not afraid to be dropped until players return, Flamini has cost us just as much as he has aided us.

When it comes to Elneny, he has a brilliant chance to prove himself before Coquelin comes back, and a working midfield partnership with Ramsey would go a long way in cementing his importance to the first team in his first six months at the club.

Having the pair of Ramsey-Elneny centrally could lend us a few options in regards to formation: 4-2-3-1 with Elneny the dedicated holding player and Ramsey the box-to-box, 4-4-2 with both being in the middle of the flat four, and, the one that I personally feels makes the most sense, 4-3-3 with the pair deeper than Mesut Özil at the top of the triangle.   The brilliance of playing a 4-3-3, perhaps more than any other formation, is that it lends itself to tactical flexibility in regards to being able to both possess the ball and instantly transition into counter attacking – we’ve shown ability to do both this season quite well, and a formation that allows us to do both every outing without having to ring in changes could certainly be an ace in the hole for us as the season progresses.

The most important aspect of the change, however, is that it gives us more balance throughout the side, through the middle and that it highlights the abilities of quite a few players in our side, not just the midfield pair.  Additionally, it’s a formation that the vast majority of our first team players have spent time being deployed in – Özil at Real Madrid, Sánchez and Bellerín at Barcelona, Monreal at Malaga, Campbell at Villareal and for Costa Rica, among many others.  It will clearly be an adjustment in all respects in the bigger picture for us, but over time there are plenty of reasons to think positively about the player and what it means for us from a tactical standpoint.

He may not have been the midfielder most have wanted, but Mohamed Elneny could very well end up being a player we needed at this very moment.  Young, ambitious, experienced and adaptable, this is a move that affords Arsène Wenger options both now and in the future.  Whether asked to hold the midfield or press further forward, he gives us added flexibility, an underrated attribute that champions usually have in abundance.  He may not settle immediately and it could even take him until next season, but if you find yourself in a spot of doubt, just remember that we have now brought in a player who only caught our attention after we were scouting Mohamed Salah and Ahmed Hamoudi a ways back…and then remind yourself that we moved for Elneny rather than the other two.  Surely there is something about this player…we just need to be patient and keep faith.

Drew is one of our #ABW Regular Columnists and can be found on Twitter as @AFCBvB1410. When not writing for us, he also writes for Outside of the Boot and Full90Gooner.  He’s also a regular on the Football Hipsters Podcast.