Thinking the Unthinkable: Are Arsenal capable of surviving tactically without Mesut Özil?

Coming from me, such a question borders on the absolutely ridiculous…impossible even. Though I am not suggesting that Arsène Wenger should look to sell our prized German maestro, this piece is more of a tactical look at if Arsenal would not only be able to push on without one of the best number ten’s in world football, but also thrive.

Let me first just say that anyone who knows me, on any sort of level in regards to football, knows that I have defended the Gelsenkirchen native for the entirety of his Arsenal career to date. Having followed him from his Schalke days, through his rise to stardom at Werder Bremen and then his confirmation of greatness orchestrating the Real Madrid attack, I absolutely believe that he is one of the most gifted footballers on the planet. But football is a funny old game, one that provides us with constant reminders that the ability of a player doesn’t always guarantee that they are classified as a necessity.

Over the course of the last three seasons plus the opening month of the current campaign, Herr Özil has logged rather impressive totals in statistical categories that understandably present the argument that he is vital to the side. From his first outing with the club in the 2013/14 season through this past weekend (86 Premier League appearances) the German international has completed 4,693 passes, a pass percentage of around 87%, 263 key passes, created 296 chances, and been the best customer service representative at Arsenal LLC on 33 occasions (for the sake of time, I have not factored in Champions League or either of the domestic cup competitions). The averages work out to be 54.5 passes, 3.05 key passes, 0.38 assists and 3.44 chances created per match – numbers that are beyond commendable.

Though his influence is undeniable, the question that has been preying on my mind for quite sometime now is that if we could re-define our tactical approach in a way that would actually make him surplus to requirements.

The current medium at the club see’s us deployed in a 4-2-3-1. Though the midfield selections are never a guarantee, Özil is always slotted behind the center forward, with Alexis Sánchez on the left and whichever right sided player Wenger fancies on the day. Immediately however, if you were to dissect the formation and our brand of football, the first realization comes by way of the fact that it’s the central midfielders behind Özil, and not Özil himself, that are absolutely key to the way we operate. Though it remains to be seen exactly what we will get out of new singing Granit Xhaka this season, Santi Cazorla, Aaron Ramsey, Francis Coquelin and Mohamed Elneny have all solidified (some more consistently than others) their importance in the midfield on both sides of the ball. Coquelin may divide opinion, but he still remains an energetic holding midfielder willing to work. Elneny is arguably the unsung hero of last season, Ramsey must do more to prove that his form for Wales can be matched at club level (though his ability should not be questioned), and Cazorla is the Colonel behind Feldmarshal Özil. 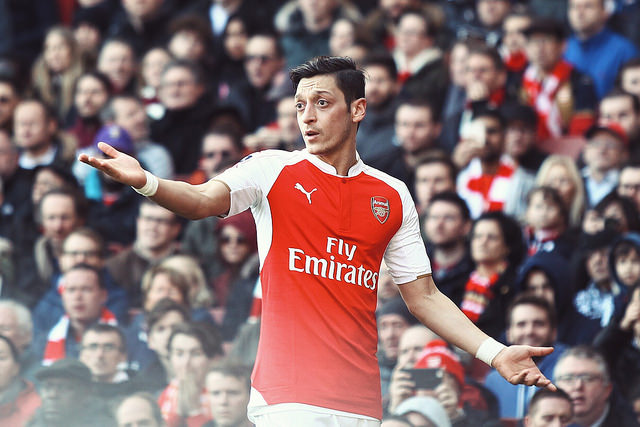 We love this German here at ABW. Credit joshjdss under license

If last season proved anything to us beyond the shadow of a doubt, it’s that Arsenal are more susceptible to struggling when Cazorla is not available for long stretches of time perhaps more than any other first-team player. Just as creative as Özil and a master of controlling our tempo when in possession, he is constantly what I like to call “the assist beyond the assist.” Countless numbers of chances we create as a side would never materialize if it wasn’t for Cazorla’s play behind the front line. This is where the notion that we could get on without Mesut really comes into play.

For the past few seasons it has become clear to me, as well as a few others, that Arsenal could indeed be on the cusp of another tactical refit. In the days of the Invincibles, a 4-4-2 (in truth it was a 4-2-2-2) was Wenger’s bread and butter deployment. Patrick Vieira and Gilberto Silva dominated the center of the back, Robert Pires and Freddie Ljungberg patrolled the flanks with reckless abandon, and Thierry Henry and Dennis Bergkamp formed what was hands down the most gifted strike partnership in the history of the Premier League. It was a deployment that was incredibly mobile and interchangeable, but not reliant on a single piece of the puzzle. Rather, it relied on its ability to be unified on both sides of the ball. So often you would see Henry turn up on the left hand side, and then see multiple runs forward from Pires, Vieira and Bergkamp that were either picked out by the French legend or you would see his utilization of the space left in the wake of the forward runs that he would ruthlessly exploit. This is just one of the many examples that made Arsenal such a tactical juggernaut – expert movement on and off the ball that allowed the system to be fluid in a way that we have still yet to see since. Though the current squad are by no means short of gifted individuals as well as tactically intelligent “quarterbacks”, the fluidity is not nearly what it could be – many have claimed that is down to the way we so often force play through the middle, and indeed, emphasizing Özil having the final say on an attacking move on far too many occasions.

In truth, and it pains me to say it, we are very limited tactically with Özil in the XI. Though he is “capable” of playing wide on the left or in a midfield three if we were to switch to a 4-3-3 deployment, he’s still a player who realistically prefers to be central to everything that goes on in the build-up – this is a massive shortcoming. Likewise if Wenger was to re-adopt his 4-2-2-2 from days gone by, Özil couldn’t possibly fit into the side at all. So the question is, would we be more capable and flexible if Özil no longer graced the pitch at the Emirates?

Try to consider for a moment the options afforded to us if Özil was not an Arsenal player (with the rest of the first-team being the same as it is currently). In a 4-3-3, it’s likely the XI would be something along the lines of the following: Čech; Monreal, Mustafi, Koscielny, Bellerín; Coquelin; Cazorla, Xhaka; Sánchez, Walcott, Pérez. On the surface it’s evident that it would be based off the counter, with the front three all possessing pace and a high work rate, while the midfield three would look to win the ball back and spring the attack quickly through Cazorla or Xhaka. A deeper look however would show that it would be a deployment that is surprisingly mobile and interchangeable. Any of the front three players could pop up in all areas of the final third, while the midfield trio would remain a three without the ball, but change shape based off if we were maintaining possession (Cazorla would go further forward into the traditional ten role to be a closer link to the center forward) or if we were still looking to hit our opposition on the break and opt to keep shape. Though our current system does promote a bit of movement when going forward, it’s drawback comes by way of too many players wanting to come central to effect the run of play – with a 4-3-3, this is avoided all together. 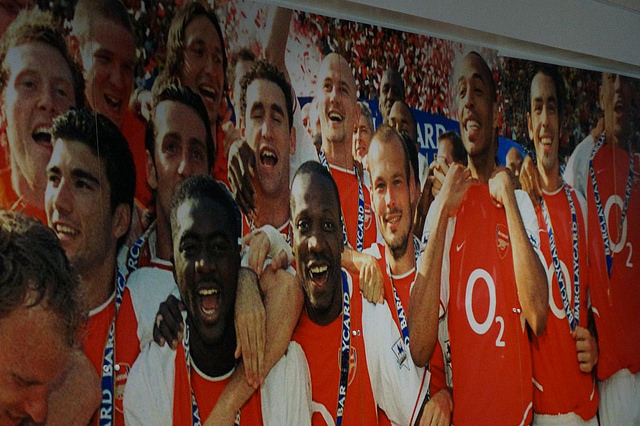 How would Özil fit the 4-2-2-2 formation of the Invincibles? Credit Steven Feldman under license

Another option mentioned before would be a return to the vaunted 4-2-2-2, the approach that saw Arsenal earn the only golden Premier League trophy in history. Just like in a flexible 4-3-3, it would be difficult to see where Özil would fit in. Being deployed as one of the two central midfield options would be ruled out automatically, as the pair would need to be able to consistently transition from offense to defense (this is where a partnership of Xhaka and Ramsey could, over time, become dominant depending on a few factors). In similar fashion, deployment on the left would likely not be the right fit for him as these players would asked to be direct and incisive in that Pirès mold, something Özil has never been asked to do in his career up to this point.

Before closing, I’d like to again stress that this is not meant to be a damning piece levied in the direction of Mesut Özil at all. I absolutely adore him as a player, and will continue to defend him against the few detractors that he still has. However, as a student of the game and a supporter of Arsenal who loves the club, it’s perfectly healthy for one to look outside the box and acknowledge other possibilities, even the ones that we feel are too terrible to contemplate.

So for the time being, which hopefully is until he’s roughly eighty-five years old, let’s all enjoy the brilliance of our tactical commander-in-chief. But as Arsenal fans, let’s also remember that if there are ways that can help the club move forward and progress on the pitch, then no possibility should ever be discounted.