Arsène Wenger has seemingly started the season plunging into his toy box in order to find players which are good enough to utilise – and by what we’ve seen so far, he seems to like variety. There are some old favourites that have taken precedence over the newer, more expensive flavour of the month toys.

This is one thing we know about Arsène, he is a loyalist in every sense of the word. He prefers to stick with those he’s groomed over a period of time rather than throw in a new signing that isn’t as in tune to the Premier League as proven talent.

Rarely before have we seen so many completely varying line-up predictions just to see them blown out of the water by Wenger making choices we can’t predict, perhaps neither can the opposition (and perhaps that’s the point). It’s been met with frustration from some fans, I included, but are we wrong to judge so quickly? In football it’s all too easy to spout certainties at situations that we’ve barely seen the surface scratched on.

Promising signs are that this is a squad with genuine competition within it. I have no doubts that Xhaka will be a mainstay in the side in the very near future but for the moment he’s struggling to break into our starting 11 ahead of either Santi Cazorla or Francis Coquelin who partially vindicated Wenger’s faith with a good performance against a Hull team in impressive form.

The team was positioned very high and Hull found it hard to get out of their 18 yard box let alone their half. Admittedly there were times they got the ball forward and it was only Koscielny and Mustafi back which is worrying but on the day it was rarely anything more than one Hull player forward for them to defend against. 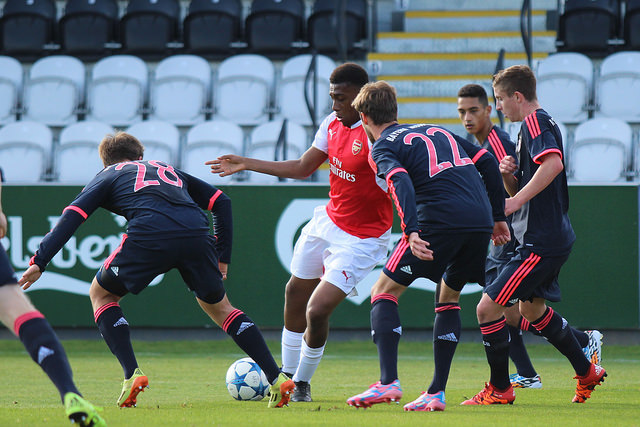 Iwobi was an attacking bright spark again on the weekend. Credit joshjdss under license.

Alex Iwobi, another that’s been rotated in and out, had a fantastic offensive display truly showing how progressive he can be – he received the ball in clever areas and moved the ball into dangerous spaces.  His performance was capped off with a sublimely instinctive back heel assist for Theo Walcott who is so far justifying the faith in him that kept him at the club over the summer.

Question marks over Iwobi’s tracking back remain but at 20 years old, to have such a talented player come through our youth academy is immensely pleasing. Special mention to Jay-Jay Okocha’s family DNA.

Is Alexis a Centre Forward?

Alexis Sánchez as a striker has shown it can work but must be facilitated. Much like Ibrahimovic, Alexis likes to drop deep. This can be perceived as a good or bad thing given your perspective but in my eyes it’s only bad if we don’t set the team up for that characteristic.

Theo Walcott or Lucas Pérez on the wing could move into the space that Alexis vacates without them needing to play back to goal or do much holding up of the ball that normally a lone centre forward would be required to do, making it much more of a striker partnership than a lone striker formation. This also helps Özil and Iwobi and it gives them more space to thrive between the lines – they can move higher than Alexis if the space is there and they can combine with him in narrow, overcrowded areas. Of course Alexis will still be judged on goals and that will be a test he’ll need to live up to.

To look on the bright side is to realise over the last 3 games, even though some performances have caught the eye for the wrong reasons, we’ve achieved 6 points in the league and a point away in France. I’m sure we’re all happy with those outcomes regardless of how we got them.

While certain rival teams are losing players to injuries after just one European game (one of which also having to sell tickets on general sale), we’re bedding in a host of players to get them match fit and sharp, something that could help us exponentially over the next few months as we look like we’re finally being pro-active in avoiding our yearly injury crisis.

I won’t say judge in May but I do think we should let the next few months play out and see how this plan really unfolds. Personally I’m enjoying the depth and the competition within the squad, let’s keep everyone on their toes – is anyone truly un-droppable at this moment in time?

Have you listened in to our latest Podcast and Radio shows?  Get your fix right here: