Why are we having to read this book AGAIN?

Midway through April and out of all competitions, fighting to regain our top 4 status, it’s a feeling that we always hope to move past but seemingly get dragged back in almost like we’re magnets to mediocrity. Things change, problems seemingly get fixed and more relentlessly arise.

In recent seasons Arsenal have been scrutinized for shining against smaller teams and going missing against big teams yet this season our record vs big sides is decent and we’ve become inconsistent against the smaller teams, why can’t we find the formula to be consistent?

The biggest reason of all is a lack of quality in midfield, which is strange to say when your team boasts world class players like Alexis Sánchez and Mesut Özil. So far this season we’ve seen players like Mathieu Flamini, Joel Campbell, Francis Coquelin and Theo Walcott all accumulate 20+ appearances, not that I think any of these are bad players but we should never have to rely on them to be in the starting squad.

Flamini is past it and although he has put in one of two good performances in general has been a liability, Campbell works hard but seems like the footballing equivalent of taking your younger brother to play football with your mates and applauding him when he isn’t terrible, Coquelin is a very technically limited player and there seems to be an aura around him that prevents him from being criticized with a lot of the fan base – the goalposts get moved for Coquelin perhaps because fans have been crying out for a center midfielder with bite in the challenge for a long time and now we have one it would hurt too much to admit that alone is not enough.

Not only this but a lot of our players seem to consistently look like they need real direction. It’s been said on many occasions that Arsène Wenger is more of a teacher than a coach, he does most of his work off the pitch moulding players instincts and muscle memory traits and then setting them free onto the pitch with limited tactical instruction hoping they’ll repay the faith he gives them like a baby bird being ushered from a nest praying they’ll fly. It’s also why he prefers to work with players over a period of years rather than go into the transfer market for solutions.

Football has changed drastically over recent years, though. The Premier League is becoming more technical every year and telling players to go onto a pitch with loose instructions relying on their quality shining through isn’t good enough anymore (especially when a large chunk of our midfield lacks quality to begin with). Mohammed Elneny has come into midfield and done an admirable job but I still don’t see anything in him that suggests he could be a mainstay in our midfield next season and lead us to a Premier League title.

That midfield pivot in particular is a major problem. They’re meant to run the show for us but we often get lost in our own first phase of play. Passes are successful but they’re thoughtless and sloppy, often taking away from our momentum bit by bit which affects our ability to break teams down. 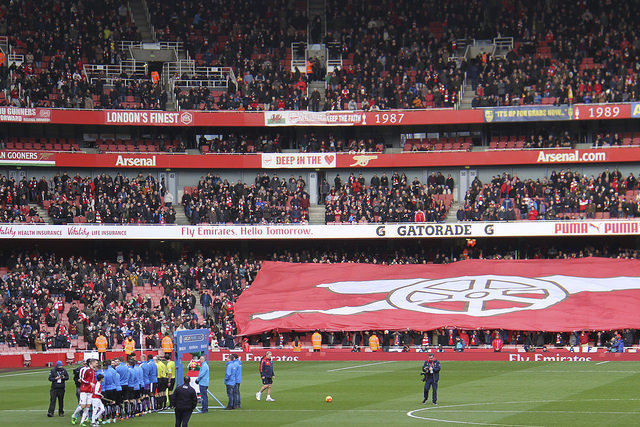 There is so much to address this summer at the Emirates. Credit Ronnie Macdonald under license

I still see a great deal of quality in Ramsey too but he tries to do far too much, his problem has never been a lack of ability to do enough but that he tries to do everything. He tries to be on the end of every move and when playing next to Coquelin he was also asked to be at the base to receive the ball from the defenders and progress it into midfield when it’s quite clear that Ramsey is more natural at receiving the ball from that player instead.

The problem comes from the organisation behind that: who tucks in? Who drops in-between our center backs allowing them to split and stretch out to cover that space? Where do we press to retain the ball when we lose it? Do we drop off? These are all questions I see whirling through our heads when we’ve watched Arsenal play this season.

There are very key areas I feel Arsenal need to address next season:

1. Fix the overwhelming lack of balance in midfield.

We need more quality and we need to establish variation and competence in each phase of play. We need a player that can receive the ball from the defenders, set tempo and be the brain of our team as we build to attacking areas.

2. Strengthen the spine, no more excuses.

I could understand why a striker wasn’t signed in the summer at the time but it’s now been proven that lack of finding a capable striker to at least improve our current options was a grave error from the club’s hierarchy. Giroud is suffering his usual ‘latter season goal drought that we hoped wouldn’t happen again’, Walcott has fallen off the face of the earth and although Welbeck has helped the team it’s quite clear he’s not a top center forward. Of course it’s easy to say this in hindsight but if a striker was bought in to step in when Giroud’s form dropped off our season could look very different.

We can all hope that Wilshere and Chamberlain will go the whole season with no injuries, realise their potential and play a key role but we can’t assume they will. We need to have players in place of quality we can turn to if history repeats itself and if those players mostly stay fit let it give us a nice selection dilemma.

4. Give the captaincy to Petr Čech.

Generally I’m not a fan of goalkeepers being captains and I’d much prefer there to be a better option but we’ve gone too many years having captains that aren’t consistently on the pitch to fulfil those duties. Vermaelen was captain and Arteta wore the armband more, Arteta became captain and Mertesaker has captained us more this season and even now Koscielny is standing in as Arsenal captain for our vice captain. Čech is a winner, has a plethora of experience and he leads by example.

I have no doubt that Wenger gives them more tactical guidance than I’m currently giving him credit for but it is clearly not enough, these players need more help and although I love that Wenger shows faith and trust in his players it’s his responsibility to make sure he does all he can to prepare them to play football the way he designs and that takes more than being a very gifted teacher off the match day pitch.

It doesn’t take a high level of observance to see the fan base is divided and not only that but the fan base as a whole feels divided from the club. The club have done a lot right but I don’t believe they’ve done enough this season. Fans want to see action and they want to see signs from the club that they know this season they’ve all failed. So many fans just want assurances that steps will be taken to fix this and a lot of the hate comes from the fear that there won’t be. I’m not as fickle to believe that we can fix all of our problems in the transfer window but we can use it to build a real platform to show fans that the people running the club know what’s needed and they’re willing to take action.

There’s so much about Arsenal that you feel can genuinely take the club to the next level but until the spine of the team, as well as the club in general, is fixed we can only realistically expect to be talented but not talented enough.

Emmanuel Petit said it best in his emotional rant that was epitomized by his repeated quote of “This season was for us.”

Have you listened to the latest pod and radio shows?