Why November is Arsenal’s make or break period

What could have been a woeful start to a season which contained such promise after the summer has turned into one filled with countless possibilities. After our 4-3 home loss on opening day to Jürgen Klopp’s revamped and revitalized Liverpool, Arsenal followed up the disappointing with a 0-0 draw away at the King Power Stadium. One point from six to open the League campaign was hardly what the Gooner faithful had in mind, but how our beloved boys in red would respond has potentially built a platform for greater things to come.

After the opening-day setback, Arsenal has gone on a fourteen match unbeaten run that has included notable results against Watford, Southampton, Paris Saint-Germain, Chelsea and Ludogorets Razgrad. Though we’ve still had the odd struggle (0-0 at home to Middlesbrough especially), we are in fantastic form, sitting joint top of the domestic table with Pep Guardiola’s Manchester City as well as Klopp’s Red Barons.

Despite Chelsea and Tottenham tugging on our coat tails, it’s a start we all would have wished for, coupled with sitting comfortably in Europe level with PSG and a secure passage to the knockout stages with two matches to spare after a sublime Özil winner on Tuesday.

It’s all going so well, but as we have seen in the past, this could very well turn into a moment of weakness.

There is never a fixture list released for any club, big or small, that does not have a standpoint period of fixtures that could very well end up defining their entire campaign – for me, ours is here, now, November.

Kicking the month off away at Ludogorets with a late win has seemingly set us on the right track, but it’s a difficult path in the aftermath. Spurs come to town at the weekend bringing the Premier League’s best defensive record; then an always timely international break rears its ugly head (and any potential injuries it might grace us with). Then we are hit with Manchester United away, PSG at home, then tricky Bournemouth at the Ems before the month ends with our EFL Cup quarter-final tie against Southampton.

It certainly may be a bit unusual to claim that our crucial period of the season comes just two months after it all began, but perhaps that’s the point entirely. Sustaining a challenge in club football (on multiple fronts mind you) is only plausible and indeed possible not just by jumping every hurdle thrown in your path, but by staying on form and keeping moral high. Arsenal could justifiably be accused of losing both of those key factors in one fell swoop after a poor string of results in recent seasons, which is why, for me, November is crucial.

Qualification for the knockout stage in Europe with matches to spare undoubtedly will take pressure off the boys while maintaining a high moral factor in the dressing room and at London Colney. Additional key league results against two major rivals, one of which is a mere three points back of us, would be an excellent near mid-season platform. And let us not forget what beating PSG could do for our confidence in Europe, as two wins in our next two continental fixtures would see us top our Champions League group for the first time in a half-decade. 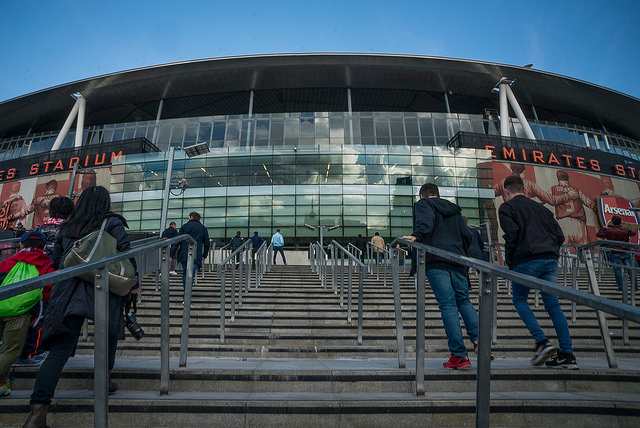 November has been an uphill battle in recent seasons. Credit Paul Hudson under license

But what is behind our strong start and the continued ability to garner results thus far this season? In a word, depth.

After summer business that saw additions to the first team in the frames of Granit Xhaka, Lucas Perez, and Rob Holding, Arsène Wenger has finally put us in a position where sustaining a challenge on multiple fronts is truly possible. We no longer have to rely on playing players that are out of form or need a rest, nor will we be too easily scuppered by injuries to the team.

At current, we have a midfield quintet that can match anyone in the League, a center-back pairing who (at least on paper) are arguably the best the Prem has to offer and attacking options surrounding the creative genius of Mesut Özil who have been in scintillating form. Let’s not even mention Héctor Bellerín’s rise to prominence, the continued leadership and experience shown by Petr Čech, and the overall fact that everyone back to from, one to eleven, have been contributing positively. At the moment we have no real weak link, and it shows.

While we have so many things to feel positive about, we do have to maintain a bit of realism about it all. Tough points WILL be dropped, losses WILL be suffered, and yes, injuries are inevitable. But yet again, this goes back to the mental standing and spirit of optimism that seems to be at the core of the team currently – a team that continues to fight and put their best boot forward week in and week out despite the obstacles is a team that can achieve great things.

In this instance, it is difficult to result making a reference to Leicester City last season. In keeping in brief, they weren’t overflowing with the ability of a side capable of winning the League, but what they did have in abundance was self-belief and motivation – two ingredients that are so often a defining factor in sports across the board. More often than not, those two factors are born out of events that unfold during play, in this case on the pitch. Leicester won the league because they saw the tangible results they garnered and kept their belief – can we not do the same?

Depth in quality and the mental capacity to deal with the hardships that a season can and will throw at you are what it takes to have a title winning season. Sure, it is difficult ever to see us winning Champions League given the competition in the latter stages, but what a season it would be if we won a domestic double.

If we dream to be champions once more, we have to start not only playing like champions but also acting the part as well. Thus far this season we have all seen what we are capable of when we are truly at our best, the challenge now will be to find that sustainability that so often has eluded us, not just in our play, but in our ability to adapt mentally to trying scenarios.

I know that I usually come to you with a tactical rant or what amounts to a breakdown of a player, but what is necessary now is putting forth the realization and belief that this very well can be the season where we once again wrap our hands around the League come May.

The chance to turn a good season into a great season will come and go before you know it, and so often it comes down to a smaller period of the season where critical results see you keep the course or get blown clear off it. Here’s hoping we stay the course instead of letting November winds take their toll.

Have you heard the latest Podcast?  Listen here: