As much as I would like to rant and rave about how this isn’t the November I was hoping for, I’ll spare you all… for now. Though we can be happy with our result against Ludogorets and a spirited 1-1 draw (though disappointing on the whole) against that lot up the road, our performance at Old Trafford against Jose Mourinho’s underachievers left far too much to be desired.

In a ninety-minute display that we realistically only made an appearance for a fractional percentage of, the truth is we are quite lucky to come away from the northwest with a point. United should and undoubtedly do feel hard done by the result. We may not have been ruthlessly put to the sword in stunning fashion, but it’s a result where we can look back in May and honestly tell ourselves that we have one more point in the table than we should have. To be blunt, we should have expected far more from our boys in a match against one of our biggest Premier League rivals.

On the whole, it was a woeful display where a result papers over every single crack imaginable. From one to eleven, back to front, not a single player put forth the effort required in a fixture as (historically) monumental as Saturday’s showdown. If not for the late heroics by Alex Oxlade-Chamberlain and Olivier Giroud, the fan reaction would be even worse than it already has been. Despite the well concocted great escape plan hatched by Oli G and the Ox, one which lasted a matter of mere seconds, there isn’t a single player who you could say turned up. Alexis ran his socks off, as usual; Coquelin played the holding role well, and Mustafi continues to show why his purchase was an excellent and necessary bit of business, but clearly, that was never going to be enough to stuff United at their ground. In a rivalry outing, you expect more, demand even.

One player in particular who is coming under 88mm Flak (brownie points if you catch the reference) levels of stick in the wake of the weekend’s result is Aaron Ramsey. For so long now, the majority of the fanbase have had a mixed-bag relationship with the Welsh international. Once prized by Sir Alex Ferguson himself while at Cardiff before Arsène Wenger swooped in, Ramsey (ironically much like Wilshere in the same respect) can only lay claim to one stand-out season for the club. During the 2013/14 campaign, the Caerphilly native registered ten goals and eight assists in the Premier League in just twenty-three outings. Though he had six and six, and five and four in the following two seasons, he’s never truly hit the heights that came with the growing reputation he garnered while with the Bluebirds.

There are few who could speak against his ability as a footballer in truth. He’s fantastic on the ball, has an engine that few (if any) at the club could match, a killer instinct in recognizing late runs into the area during the run of play, and given his stints as Wales captain, his leadership qualities. But if you were to pick apart his offerings at the Theatre of Dreams on Saturday, your video compilation would be roughly 5 seconds in length and bear no substance at all. We were poor on the day, but Ramsey was the worst of the lot.

Before you assume this is turning into a Ramsey witch hunt, slow down for just a second. Yes, he was our worst performer, but this is not a moment where the player should shoulder the blame – that should fall at the feet of Le Prof. 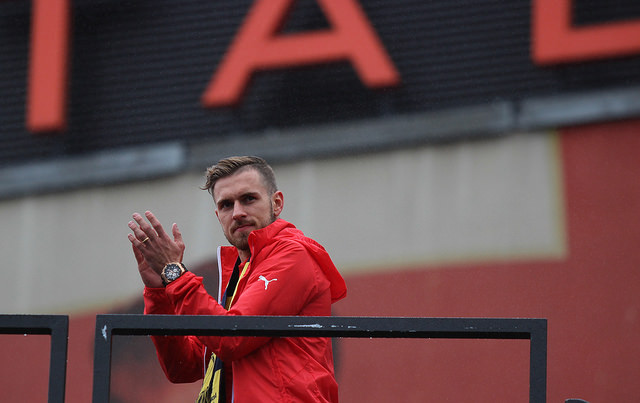 Ramsey’s wide role is a square peg in a round hole. Credit joshjdss under license.

We have seen this scenario before, this whole business of Ramsey out wide. Usually deployed wide on the right in the past when it’s happened, against United he was on the left of the attack… a notion which, for me, was already flawed before kick-off. Initial observations show that he would come into confrontation with right-back Antonio Valencia. The winger-come-defender, well known for his pace, ability to get forward and put service into the box, and technical ability as well as a brilliant engine in his own right, likely would have looked down our left-hand flank, noticed our lack of pace, and licked his lips in anticipation. Ramsey, for all his effort, is by no means a speed demon, and with the seemingly aging legs of Nacho Monreal this season coming into play, Ramsey on the left already seems to have been the wrong decision by the manager.

In defense of Ramsey, his willingness and ability to track back and give Monreal extra cover could have been Wenger’s rationale, but over the course of the last few seasons, Ramsey has been accused numerous times of failing to get back and support the defense, especially when losing possession.

Perhaps another reason for his inclusion in the XI on the left was the necessary deployment of Mohamed Elneny alongside Francis Coquelin. It may not have been Elneny’s best performance in an Arsenal shirt, but his mobility in defense (over someone like Granit Xhaka, and Ramsey himself) was needed. With Mourinho fielding both Marcus Rashford and Anthony Martial in a front three that included a mobile Juan Mata while supporting them with Hector Herrera and Paul Pogba, midfielders who love to bomb on and get into the final third, a midfielder who can and will sit deeper to support our back four was the requirement. Thus, Elneny was needed.

In truth, I do not think Arsène’s reasoning for squeezing Ramsey into the team was because of the mere notion that he was fit. Taking one out of our dear Luke’s (@LukeisPremium) playbook, I genuinely think Wenger inserted Ramsey in a bid to give us another player who could potentially control the match the way we prefer. It’s no shock to anyone that we are a team who, on average, prefer to have more of the ball than our opponent. With Xhaka on the bench (and not preferred for this joust) and Santi Cazorla still not fit for service, Ramsey seemed the only logical choice in regards to a player who, apart from Mesut Özil, could control the ebb and flow of proceedings when on the ball.

Logically, it makes sense. But for me, regarding our tactical schematic, it held us back. Though likely under increased pressure if Ramsey’s creativity was not on offer, Özil is still capable of coping with being the sole creative force (despite a poor outing himself at the weekend). The caveat to that naturally, would be making sure Özil had runners in front of him to either help him create space for himself or, giving him options supply in the final third. In both Ox and the ever-improving Alex Iwobi, we had those options on the bench. Both wingers are players who bring pace and technical proficiency. Given that the only way we were likely going to break down a rigid Mourinho defense which deployed two wing-back’s who exhibit pace, is by utilizing our own pace and direct approach when required. If our equalizer late on tells you anything, it’s that Ox’s turn of pace out wide to give him enough time to whip in a brilliant ball for Giroud to head home is what we were missing for the lion’s share of that match, if not the entirety of it. 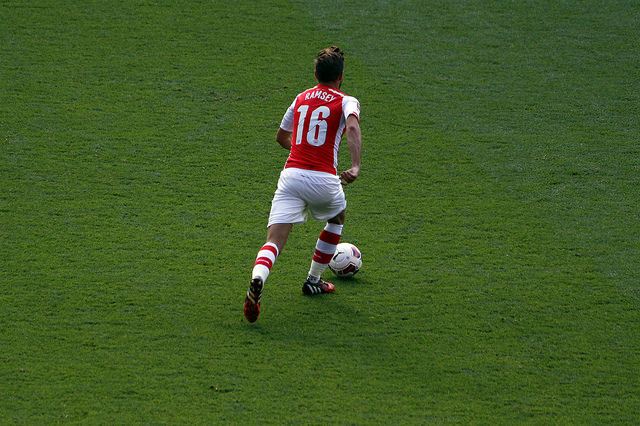 Forcing players into a system, or a particular task on matchday, is not the way to achieve tactical balance. For years, Arsenal has suffered from such an imbalance, and for me, it’s the main reason why we have yet to lift the Premier League title since 2004. Moreover, there is never a reason to not trust your actual wingers to do what actual wingers are employed to do – use their pace as an outlet, use their technical ability to help break down a stubborn defense, and to run at their marker to draw fouls or to bring a different dynamic into the overall tactical approach. Against United, until Ox came on, we didn’t have any of that, and it showed.

On the whole, I still have praise for Ramsey. Do I think he’s one of the best midfielders in the world? No, but he certainly is more than good enough to fight for a place in his preferred position(s) if we aim to keep him at the club (which is another debate entirely and for another time).

As for Wenger, now is not the time for square pegs in round holes, we have all suffered that nonsense enough. We have wingers who can do the job as required, and in Iwobi especially, we have arguably one of the hottest emerging young prospects in England at current – use him, and use Ox, as they are intended.

Ramsey deserves to play, but only where he can help the team, not hurt it. But in that same light, stringing him up by his ankle isn’t the right course of action from the fanbase either. He’s gone on record saying he doesn’t like to be utilized on the flanks, but that he gets on with it because it’s what he’s been asked to do, which is what you want from any player who puts the club first. So yes, he was poor, and yes he’s not above constructive criticism, but there’s only so much negative outcry that can be levied against a player who was asked to do a job to which he truly isn’t suited.