Today, we bring you Part 3,  our overall thoughts on the season.  Also check out Part One which covered Match and Goal of the Season along with what we think was the Season’s Turning Point, and Part Two where we cover our Breakout Player, Disappointing Player and Best Overall Player.

THIS was the season…the perfect chance. No one could have guessed that Chelsea would have been borderline dengue fever this season, and the same can be said for City falling off the boil the way that they have. The truth of the matter is, however, that we failed to genuinely push on. At the beginning of the season we bloggers made predictions, and if I am not mistaken, we all said we’d go on to win the league. Finishing second is close but obviously not close enough, and while I supported the signing of Petr Čech, we were all left praying that not signing a single outfield player in the summer wouldn’t come back to murder us in our sleep – which it did.

There were some bright spots. We finished above Spurs and City, we showed well against the now champions and we put faith in Iwobi…but this is not nearly enough.

We cannot cite an FA Cup win to paper over the cracks, we were embarrassed in Europe (again), and now we are yet again left to wonder if coming second this season will prompt Wenger into thinking we don’t need the obvious large investment in the team that we clearly need.

The average point totals to win the Premier League are usually right around the 85 mark, a mark we fell short by fourteen points…otherwise known as five extra wins. So truly, were we that great this season despite finishing runner-up? We did have the third best defensive record in the league, but we had fewer goals (65) than City (71), Spurs (69) and Leicester (68), while being tied on goals with an impressive West Ham and only two clear of a Liverpool side who were utter refuse until Herr Klopp turned up in Merseyside and revitalized their season both at home and abroad.

Don’t let our finishing place fool you – we still have a mountain of work to do and we truly haven’t actually progressed. Finishing runner-up on the surface is progression but the reality is we have not been good enough. This season featured our worst goal tally since 2006-2007, our fewest wins since 2010-2011 and our worst point haul since 2011-2012 – progression? Not a chance. Many will also point to the fact that the difficulty of the Premier League has increased over the last half decade, which it has, but if our response to that is for those key numbers to drop, it should tell you we have not risen to the actual challenge.

All in all, if this season was an important one, the 2016-2017 campaign will be the biggest for this club in quite some time.

In the end, it all feels like a very strange season when we look back on it. In the beginning there was a great degree of optimism when Petr Čech was poached from rivals Chelsea, but following that coup Arsenal failed to kick on. The inability to sign a single outfield player during the summer must be seen as a fatal error as once again mounting injuries played their part.

There will also be a strong sense of regret for Arsène Wenger when he looks back on this season for the simple reason that Arsenal have finished above Chelsea, Manchester City and Manchester United – and not won the Premier League. Of course, we cannot take anything from Leicester City. The league table doesn’t lie and they are deserved champions, but Wenger will surely look back at this year and wonder what might have been. Certainly you feel that with better recruitment last summer – namely a top class striker and centre-back – then things may well have been different.

As for the future and what it may hold, we should first and foremost forget about the idea of Wenger leaving this summer. Finishing above Tottenham has understandably quelled a few doubters and bought the Frenchman some valuable time, but in reality he was never considering walking away anyway. Wenger honours his contracts and with a year left it would have been odd to see him leave the club he so dearly loves.

Wenger must strengthen this window in order top push on. credit DSanchez17 under license

Next season, however, does feel like it will be a last chance saloon for Wenger. As I have blogged on here before, it is very much like the 2013/14 campaign – where the manager’s future rumbled on until weeks before his contract was up. I would expect the same to happen again, but with the caveat that a league title must be secured if Wenger is to extend his stay in north London. Such an achievement is not of the question, especially if the reported transfer targets are brought in. However, failure to do will lead to another Groundhog Day – a scenario we are all tired of.

Despite an unprecedented 2nd place and finishing above Spurs (again), City, United, Chelsea and Liverpool, I don’t think there’s anyone who’s associated with Arsenal football club who should be pleased with how this season has gone.

It wasn’t so much that we were expected to win the league at the start of the season (I think most would predict another top 4 position), but seeing other big clubs around us suffer massive issues – and being top at Christmas after beating Man City – it was clear this was meant to be our year.

Our customary injury breakdown showed it’s ugly head in December and although we fought bravely on for a small period of time eventually we dropped away, as we always seem to do. I believe lack of QUALITY depth was our big issue, and by quality depth I mean if players the level of Joel Campbell, Mathieu Flamini, Theo Walcott, Francis Coquelin etc are playing 20+ games and being relied on as first team regulars for large periods of time can we really expect to win the Premier League title?

When Cazorla got injured we lost our entire midfield control. Although I’m a big fan of Cazorla, why is he the make or break of our season? Of course we had midfielders like Wilshere and Arteta who have similar attributes but to rely on them with their recent injury history is almost madness, especially when Santi isn’t what I’d call a natural pivot central midfielder anyway.

The one positive from recent interviews is that Wenger is just as frustrated with this season as the rest of us. Wenger is a purist and he loves football in its most beautiful forms – to watch the incoherent atrocity that we called our football this calendar year would have hurt him, I’m sure.

The key now is to assess the problems, not just in the transfer market but also on the training ground where players need clearer coaching and instruction. I personally regard this as the first failure season under Wenger and I do expect him to make big changes going into what seems likely to be his last season.

I’m struggling a little to articulate just how I feel about this season. It’s probably the right time to write this, now that the lustre of finishing above Spurs for the 21st year in a row is wearing off. In the cold light of day, you have to conclude it wasn’t good enough. It’s also May, and so often we hear the maxim “judge this team in May” – so from that perspective, it is also a good time.

The reality that for a club of our resources, we need to be challenging for the title every year. That isn’t a dose of entitled fan, but rather a view that we don’t challenge regularly due to our own failures – and not due to superior competition (mostly).

I’m often bemused by comments from other fans that we are “ungrateful” or, “we would kill to be in your position.” To say that, sells Arsenal short. The reality is that we aren’t Bolton or Sunderland – or even Leicester for that matter. We have money and we get injuries – we know that – and yet we failed to buy a single outfield player last summer. I’m not even certain how that happened. 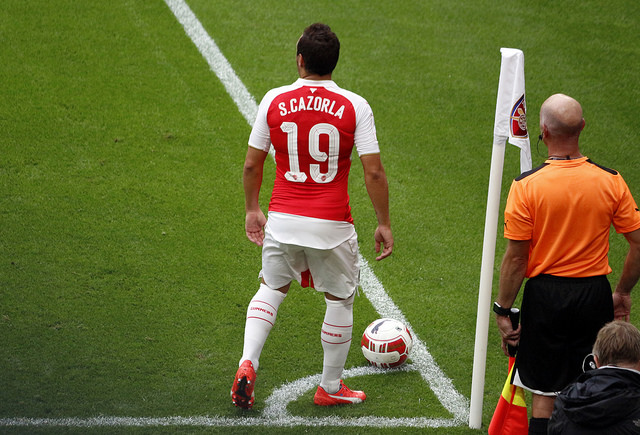 The loss of Santi in November had a big impact on our season. credit: DSanchez17 under license

Sure enough, injuries to Santi Cazorla, Alexis Sánchez, and Francis Coquelin coincided with our busiest and least productive period.

I also can’t look past the fact that Arsène failed to get the most out of his players – that disappointment has been compounded by the odd substitutions and lack of a distinguishable playing style; something I wrote about after our draw against West Ham in April.

As I wrote in April, the Premier League is changing with the influx of money and new, hungry managers. Ranieri was a breath of fresh air with his ability to manage his team with a system that was highly effective.

I’m hopeful that a positive transfer window will see us challenge this season but there is a lingering doubt that there are more systemic problems at the club holding us back.

At any rate, now’s a good time to reflect on where we came up short this season – and we did just that, before doing it all over again in August.

Thanks for joining us for our 3-part season in review.  Have a great summer!