Today, we bring you Part 2,  where we cover our Breakout Player, Disappointing Player and Best Overall Player. Tomorrow in Part Three, we give our overall thoughts for the season and yesterday in Part One we detailed our Match and Goal of the Season along with what we think was the Season’s Turning Point.

He may not have been perfect throughout all his appearances, but the emergence of Alex Iwobi must certainly be seen as an important step for the club. It’s rare that we have brought through a young player who made an impact in the first-team, something that must change if we are to progress as a club. Still just twenty years of age, Iwobi has his entire career ahead of him. Able to play on either flank, behind the striker or even in the center of midfield, he has the technical ability Arsène Wenger demands and the tactical flexibility that makes him an asset moving forward for the club. Two goals and two assists in thirteen appearances (five from the substitutes’ bench) is a decent return for a new comer. Many of us, including myself, would like us to splash the cash on a true goal scoring winger this summer,but despite that, the progression and development of Iwobi must also be seen as a priority for the club if we are to look to establish our future as well as the present.

At the start of the season Alex Iwobi was a player hardly utter by fans, but now he is undoubtedly one of Arsenal’s brightest hopes for the future. It has been awhile since the club has produced an exciting academy product, but Iwobi’s emergence is testament to the work being done at Hale End. The winger came into the side during the 3rd and 4th rounds of the FA Cup, but it is his performance against Everton in March that really saw him come of age. Iwobi scored the second in a 2-0 win and the finish was one of a player far more experienced than the Nigerian. Now the challenge for the 20-year- old is continue his development next season.

Although it’s early days, the emergence of Alexander Iwobi happened at a very critical time. It was kicked off by a mature performance vs Lyon in the Emirates Cup that understandably went under the radar because of it’s lack of any importance but that game set a precedent with Iwobi, it showed he was open to instruction and tactically flexible. As the season progressed, Iwobi got games most often as the #10 and never looked out of place among much more established players. There’s also been a lot of talk of how he was played in the central midfield double pivot for the under 21’s to help improve his tactical understanding (something that’s now being used with Jeff Reine-Adelaide) – a technique that seems to have paid dividends so far. Iwobi was given a shock start vs Barcelona at a time that we found it increasingly difficult to control the midfield area but his intelligent movement to receive the ball and progress the play played an important part in picking up 7 points out of 9 vs Everton, Watford and West Ham (a string of games that saw Iwobi notch 2 goals and 3 assists). If he keeps improving at this rate he could be an impressive player next season. 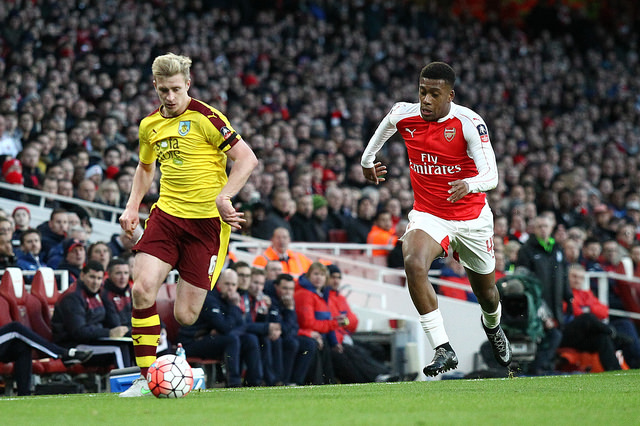 It’s funny that not that long ago, it was “the Jeff” on everyone’s minds as the player to watch this season. While I’m still excited about Rene-Adelaide, that feeling has diminished slightly with the emergence of Alex Iwobi this season. Iwobi, who was on the score sheet last summer in that game versus Lyon where we saw “the Jeff” for the first time, was initially overlooked. An exciting academy product and nephew to the entertaining Jay-Jay Okacha, Iwobi shows an ability and awareness beyond his 20 years of age. He looks comfortable on either side of Ozil and is capable of drifting inside, playing as a 10 or even operating more like a traditional winger. With two goals in 13 appearances this season, it was noted that he looked a little inconsistent at times – something expected with young talent. I’m looking forward to seeing more of him next year.

This one hurts most of us, but I would also be shocked if many of you would disagree. Once seen as the successor to his majesty, Walcott has failed to genuinely prove that he is a viable and necessary asset to the first-team. He craved time centrally, and when he received it, he just wasn’t consistent enough. When on the right, his lack of technical ability, non-existent special awareness and inability to provide service or even tuck away enough chances did not do himself any favors either. Five goals and two assists in twenty-eight combined appearances is nowhere good enough for a player of his rumored talent level. For me, if he’s not sold (I’ll even accept as little as an extra bag of balls for the training ground), he must be relegated to the role of squad player. 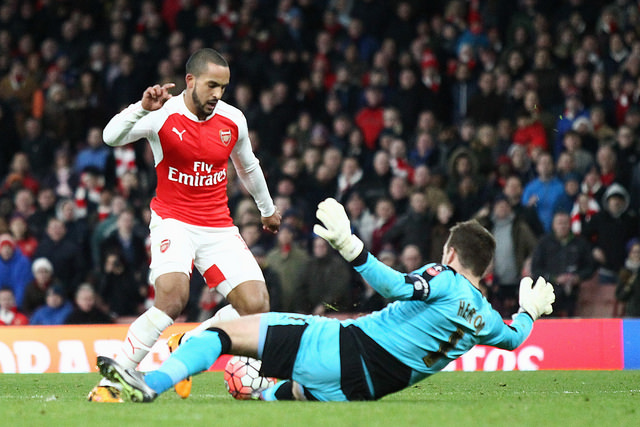 Theo has had a season to forget. credit: joshjdss under license

It seems odd to select Theo Walcott as the most disappointing player after nominating him as the winner of Goal of the Season, but the winger just hasn’t performed this season. Given the fact that Walcott is one of the club’s top earners, he should be a guaranteed starter and someone who drives them team forward in the biggest games. However instead, he is quickly becoming a bit-part player and someone who may well be shown the exit door this summer. Alex Iwobi’s ability to dislodge him from the right-hand side of the midfield typifies how far Walcott has fallen and how dubious Wenger is about his spot in the team. It could be a defining summer for the Englishman.

After a very impressive pre-season that was capped off with a brilliant left footed winner against Chelsea in the Charity Shield, many marked this as a breakthrough season for the Ox but it seemed to be anything but. Performance after performance that seemed to showcase more Chamberlain’s undisciplined tunnel-vision than his actual talent was broken up by injury after injury. He had a few promising games – the league cup tie vs Spurs probably being the main highlight, but in general we all expected so much more from him this year.

A year ago you would have coloured me surprised at the positive performances of Theo Walcott in the lone striker position.  Despite my reservations on playing him centrally, he was scoring goals – causing me to concede that he deserved a shot as the main man up top. Now this isn’t an “I told you so” bit – I’m somewhat baffled at how this season went down for Theo.  While there were notable goals (City at home – oh baby), his performances revealed a man sadly out of his depth.  What perhaps has been so damning, has been his failure to do even the basic things right when on the pitch – like tracking back and making runs.  Perhaps devoid of confidence, the longer the season went on, the worse it got, and while I’d love to see him turn it around, you’d have to think his future lies elsewhere. 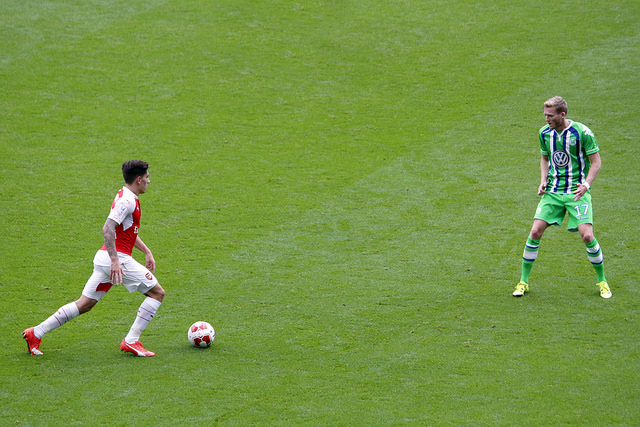 Our Spanish right back has been excellent this season. credit DSanchez17 under license

Many of our listeners and readers have been voting for Özil and Nacho Monreal, but that’s not a route I’ll be taking. Özil I adore, as everyone knows, but his dip in form for at least a third of the season for me is why it cannot go to him. As for Monreal, he’s been as consistent as ever, but for me, Bellerín gets the nod. Only just twenty-one still, Bellerín has been just as consistent as his fellow Spaniard, and has continued to improve and mature to the point where he surely must be considered the best right-back in the Premier League. Oh, and his five assists in the league were third on the team, better than Sánchez and Ramsey, and only behind Johann Sebastian Bach and Guy de Lusignan.

The only Arsenal player named in the PFA Team of the Year and without doubt the club’s most consistent performer. It is crazy to think that Bellerín is still only 21 years of age because the maturity he shows on the pitch is staggering. The Spaniard was superb against Barcelona in the Champions League, while his overall tally of six assists is something that shouldn’t be ignored. The only worry for Arsenal is if, or most likely when, Barcelona come knocking. We’ve seen it time and time again when they try to lure back one of their own – cough, Fabregas, cough.

There are a few contenders for this but I’d find it hard to look past Mesut Özil. He made our average look lethal and without him in the team we looked like a pub team. In an unlikely thing to say about an Arsenal player, it was increasingly lucky that he spent the heavy majority of the season fit and playing because if he’d suffered an injury similar to that of Alexis, Cazorla, Welbeck etc, I honestly don’t know if we’d even be top 4 right now, let alone top 2 – but having a player of his supreme ability can never truly be a negative. The guy see’s it all and then some, watching him play is worth the entire inflated Arsenal ticket price.

Mesut Özil has had his critics over the past couple seasons but this year, we finally saw the German we were expecting when we signed him from Real Madrid.  On assists alone (19), he deserves the plaudits – in fact on both assists and key passes (125), he bested Europe’s Top 5 Leagues.  But beyond that, he was ever-present on the pitch this season.  Even when the players around him stopped converting the numerous chances he created, he could be found in the centre of the park – pulling and pushing the team along with him with his mesmeric passing and leadership by example. To some, it may have looked like a dip in from, but for me – he rarely had a bad game this season; fluctuating form an exception and not an expectation.

This season, Mesut Özil took me back to the very best Arsenal teams of the past, and I can think of no better compliment than that.

Thanks for joining us for Part 2 of our Season Review and we’ll see you back here tomorrow for Part 3.