In the world of football, transfers are usually king. In today’s game it has become such an integral part of the sport. So much so that the transfer of one player in or one player out can completely change the fortunes of one club for better or worse.

Whatever you think of Luis Suárez and his antics, could you really imagine Liverpool would be in this position if he had stayed? There have been so many examples even in the last 12 months, in and around us, that have changed teams for the better and indeed, worse.

Southampton are enjoying a rare season of success no matter what position they finish in. Who could have envisioned this after the great player exodus in the off-season? Of course it takes much more than just transfers to change the fortunes of a club, but for the sake of this article and who I’m about to discuss, it leads to my overall point.

Who amongst us could have said 6 months ago that signing another attacking player, over a centre back and a defensive midfielder, no matter how much they are needed right now, would prove to be as pivotal a signing as we have arguably ever made.

From the word go, the man from Chile has come out all guns blazing for the Arsenal. Tracking back, winning balls back that he has lost, scoring, assisting, creating chances, making tackles, scoring from free kicks, you name it, Alexis Sánchez has done it this season for Arsenal.

And again I go back to earlier, to think that at first he was considered by some (if not most), a luxury signing, now with the benefit of hindsight, he was as an important signing as we have ever made. Yes he wasn’t necessarily required. But could you tell me right now, you would go back to the start of the season given the chance, and get a centre back over Sánchez?

Sure maybe we would have been in a better position defensively had we done so. But would we have gotten past Beşiktaş? We could have lost on penalties without Sánchez’s goal which effectively paid his own transfer fee. Would we have beaten Southampton at home in the league without his last minute goal? How many times have pundits and others said already that without the diminutive Chilean, we would be hovering around 14th in the league. It’s rather unfair to assume that, but who really knows? 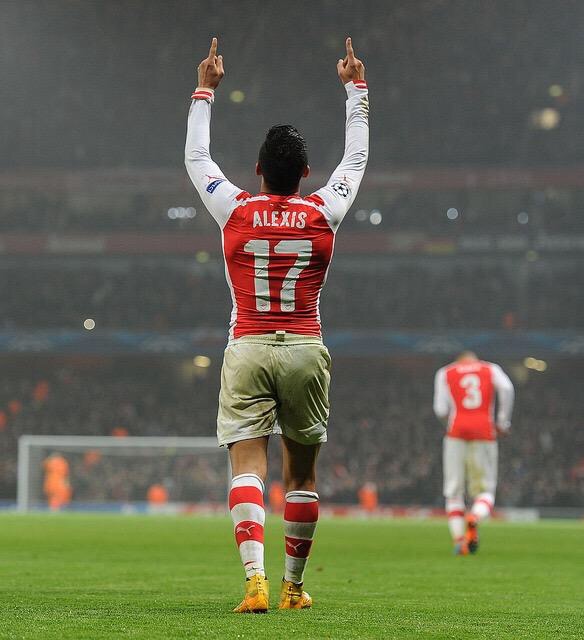 Another great aspect of Alexis is the leadership he shows. Pressing the front men at every chance. Calling on his teammates to do the same. I think he has all the qualities to be a captain, if not the clear cut talisman of the club.

As previously mentioned on the transfer front, this spending in the high millions, past 30 and so on, is still new to us Arsenal fans. Sánchez being our second most expensive signing of all time to date. And to think, (while I doubt we ever would have) but what if it was us who paid 65 million for Di María, and it were in turn, United who got Alexis? In no debate on earth can a logical football fan, nor the most devoted United fan tell you with a clear head, that Angel Di María is worth two times that of Alexis Sánchez.

And to think he was surplus to requirements at The Camp Nou is ridiculous. He scored 21 goals last season, and I have to believe, if they didn’t have a certain Lionel Messi, we may have never got Sánchez. Yet saying that, it’s believed Arsène Wenger was interested in the young lad when he first burst on to the scene at Udinese. But had we have got him instead of Barcelona, would he still have had the impact he has had now?

It was a case of right place, right time for the Arsenal. And we absolutely got our man in this transfer scenario. And yet there is a lot to like about the man on and off the field too. The story of his little pet rabbit Alfonso. An animal he rescued with the help of his brother off the streets of Spain where Wild Boars are known to roam, only adds to the character of the man in my opinion. Sánchez also has remained humble given his success and often tells stories of how as a kid, he used to perform tricks on the street such as somersaults and cleaned people’s car for money.

It’s a rare combination to find in a person that, not only has he remained humble, but also his love for animals, his personality on the pitch and his never say die attitude is something we can all look up to. There are footballers who get paid a lot more than Alexis does, and would never put in the shift the little back-flipping Chilean does game after game. Success it seems, has never gone to his head.

And now also, with a leading role in this Arsenal side, where just 6 months in, he is as important to the side as anyone at the moment. With still 4 months to play in the season, you would back him to break Thierry Henry’s most goals in a debut season for Arsenal wouldn’t you?

Looking forward, we at some point need to wrap this man in cotton wool. Even if just for a few games. Coming from La Liga and Serie A prior to that, he is used to the winter break. Although he constantly says he is fine and doesn’t need a break, combined with reports of him going so hard in training some have told him to settle down, you’d hope in the upcoming tie against Brighton and Hove Albion away in the cup, we could allow him a full 90 minutes rest. And the odd league game too.

Training is just another testament to his character and something younger Arsenal players can look up to, and indeed learn from. Alex Oxlade-Chamberlain has taken a shine to all that is Alexis Sánchez, and from some interviews been in awe of the effort displayed by the former Barcelona man. “He’s scoring this, did you see him in training” Oxlade-Chamberlain said to Kieran Gibbs, of the free kick goal Sánchez scored against Southampton in the League Cup at home.

Again I refer to how long the man has been here, and I dare argue that, considering some of the ludicrous prices teams have to pay for players these days, that we have snagged an absolute bargain. Remember, 35 million pounds is the price Liverpool paid for Andy Carroll once. English premium is no excuse for how bad that one turned out.

As this season drags on, you do wonder how long he can keep this up, and if he will indeed suffer from burn out. But on evidence of what we have seen so far, it doesn’t look like happening. In my humble opinion, if he can keep up this almost godly work rate, while still scoring and assisting and having the overall impact on games that he has, you can have your Sergio Agüeros and Eden Hazards. I believe Sánchez would be near on the unanimous player of the year in the Premier League.

Another question I ask to you readers, would you really prefer Cesc Fàbregas? Especially if we didn’t get Sánchez? If it was one for the other, given the luxury of hindsight, I say right now absolutely not. I wouldn’t let this man go for any price. And with the returning Theo Walcott, along with the pass master Mesut Özil, Sánchez’s game could raise further still. Having other players around him who can cause the defence to not focus all their energies on him could work wonders for Alexis, and indeed the likes of Ramsey, Özil and Theo Walcott.

So as far as my assessment of Alexis Sánchez goes, I don’t think this early in an Arsenal career have we ever seen a player produce what this man has up to date. Even Thierry Henry took 9 games to score his first goal for the club. The man from Tocopilla, Chile has definitely taken the Premier League by storm, won the hearts of many and continues to wow Gooners all over the world each and every game.

I’d go as far as to say that if we keep the right players around him, and he continues at this very high level, a Premier League title may not be so far away in years to come. Rating this man just isn’t fair. He has utterly ran out of superlatives for me. My personal blog has been basically a twice a week dedication to the man in the last 5 or so months and it’s a wonderful feeling to see him doing what he does each and every week for the Arsenal. Lucky location had everything to do with it huh Brendan Rodgers?

Thanks for reading. Feel free to debate anything with me about our maestro Chilean on my Twitter any time, or any number of Arsenal related subjects.

Cheers again, and here’s to us discovering human cloning devices and breeding an army of Sánchez’s in the near future.