In Part 1, Drew looks at possible replacements we could look at in the January Transfer window; Simon took on the topic of who we might have at the club already; and Luke’s article will look at a bit of both.  Enjoy and come back tomorrow for part 2.

Ladies and gentlemen…chairman of the board…esteemed and honored guests…friends…colleagues…fellow Gooners – it’s finally happened…Francis Coquelin has gone down injured, and will be out for a minimum of two months…our very own Armageddon is upon us. However, despite what the Twitterverse will have you believe, it may not be the end of the road just yet and the wheels on the bus currently sitting on highway league title have yet to fall of.

While I will certainly say that I was firmly planted in Dom’s corner (@OzGooner49) with the argument that it was poor business and a lack of a proactive approach that saw us not bring in another midfielder in the summer, I also understand the argument that it’s likely that we could just not get a deal done so we had to go with what we had. The truth, however, is that something must be done in January, especially if Coquelin is out longer than the quoted two month period (which will be longer as he seeks to regain match fitness). Simon and Luke will also weigh in with their arguments, but for me, if he is in fact out longer than the initial estimate, then spending in the January window is the only course of action that makes realistic sense.

Keeping that in mind, I’ve looked at five holding midfielders who, for one reason or another, could come in to the Arsenal set up and take up the mantel in Le Coq’s stead.

Victor Wanyama (Southampton)
Seemingly linked with Arsenal every summer, the big Kenyan somehow seems destined for the Emirates. He’s performed well at Celtic Park during his time in Scotland, and is now a pivotal piece of the midfield puzzle for Ronald Koeman’s Southampton. He will never get you many goals at all, and surely he can be criticized for poor decision making every now and then, but under the Dutch legend’s tenure he’s matured in areas he’s lacked, mainly his intelligence on the pitch and his positioning. Crunching in the tackle and adept in the air, Wanyama could very well do a job in the absence of Francis Coquelin. His one true downside however, is that he lacks the technical ability that Arsène Wenger seeks in any player he is interested in (as pointed out by our very own Neil – @ChimptheGooner). But the reality is that technical capability can be brushed up and improved, and with Southampton never being able to provide Champions League football, and with Jordy Clasie being a long-term vision for the Saints midfield, Wanyama’s destiny may lay elsewhere…however, like most of the players on this list, a January move will not suit the club and it’s a hurdle we’d have to do well to jump over if we would have any chance of acquiring his services.

Cheikhou Kouyaté (West Ham United)
West Ham United have impressed many this season under Croatian manager and all around bad boy Slaven Bilić – the Hammers currently sit sixth in the Premier League table, taking all three points against Arsenal, City, Liverpool and Chelsea in the process…a great deal of credit to their success must be owed to Senegalese international Cheikhou Kouyaté. Anchoring the Hammers midfield, but also equally capable of getting further forward, the West African tank has been far and away Bilić’s best option in the center of the park this season. Defensively strong, able to close down passing lanes well and excellent in the air, the nearly 6 foot 3 midfielder even can add goals to his dossier, as he’s netted three times in the domestic campaign (while also adding an assist as well). But he’s not just a big hulking brute, Kouyaté has the ability to play a possession game when he’s not called on to clear the lines or the box, which is a characteristic that would suit him well Wenger. The problem surely, is that Bilić will have European aspirations this season, and with Liverpool and Chelsea both struggling in the first third of the season, the former Croatian national team manager will want to build on his side in January rather than letting it’s key midfield asset go…but then again, a hefty sum could aid in his reinforcing of the club. 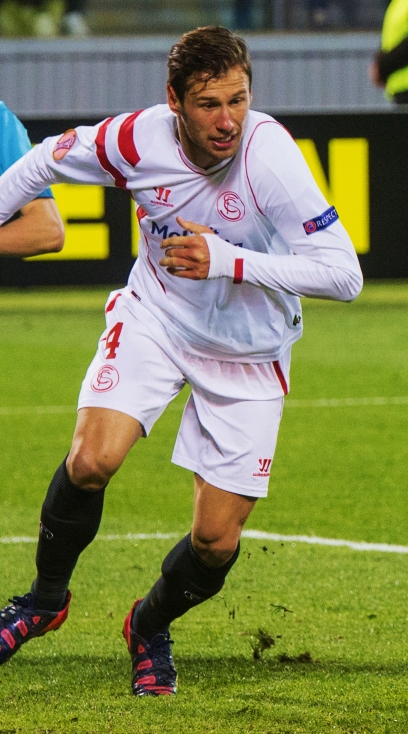 Grzegorz Krychowiak (Sevilla)
When you debate the position of holding midfielder in La Liga, surely the buck stops at Sergio Busquets, but Polish international Grzegorz Krychowiak certainly gives him a run for his money. While Busquets has been immersed in the Barca mainframe for years and thus shines in a system he was trained for – Krychowiak however was introduced to Europe via France, completing his education in Bordeaux’s youth system and then spending time at both Nantes and Reims before making his way to Spain in 2014. Defensively he is excellent in all aspects, and though his preference on the offensive side of the ball comes from systems that deploy the counter attack, he has the technical ability to shine in a league where technique means everything. Last season he was voted into the La Liga team of the season for good reason, so perhaps it was natural that he was heavily linked with Arsenal last summer. He has all the attributes required top to bottom, and more importantly, Sevilla are struggling mightily in Spain this season sitting in eleventh. The club do have other central options in midfield, mainly Éver Banega and Vicente Iborra, so the loss could potentially be tolerable…but it wouldn’t come cheap by any means. Still just 25, he would provide the ability to be an excellent addition into a talented Arsenal midfield.

Asier Illarramendi (Real Sociedad)
Real Sociedad are in quite a bit of trouble this season. The Basque club are languishing in fourteenth, just three points off bottom, though there is only a four point gap between thirteenth and twentieth. While the season still has twenty-six matches left on the docket and there is time to right the ship, the San Sebastián-based side could well struggle for the remainder of the campaign – one of the only bright spots in the current storm is midfielder Asier Illarramendi. Bought by Real Madrid from Sociedad back in 2013, he failed to truly break through at the Bernabéu, and with a recruitment policy that saw the capital side bring in Toni Kroos this past summer, Illarramendi returned to the club of his youth. The native of Mutriku may not have cut the mustard in Madrid, but he is the key midfield asset for Eusebio Sacristan’s men. An excellent passer of the ball, vision from deeper areas but also very good in the tackle, he’s a holding midfielder in the current Spanish mold…something that fits Arsenal seamlessly. Though he does not speak English, his midfield partner would be Santi Cazorla, making his transition to life at the club a little bit easier, supplemented by the presence of Hector Bellerin and Nacho Monreal. Sociedad are by no means swimming in cash, and with Europe surely becoming a pipe dream, Illarramendi could well fit the bill both now and in the long term. 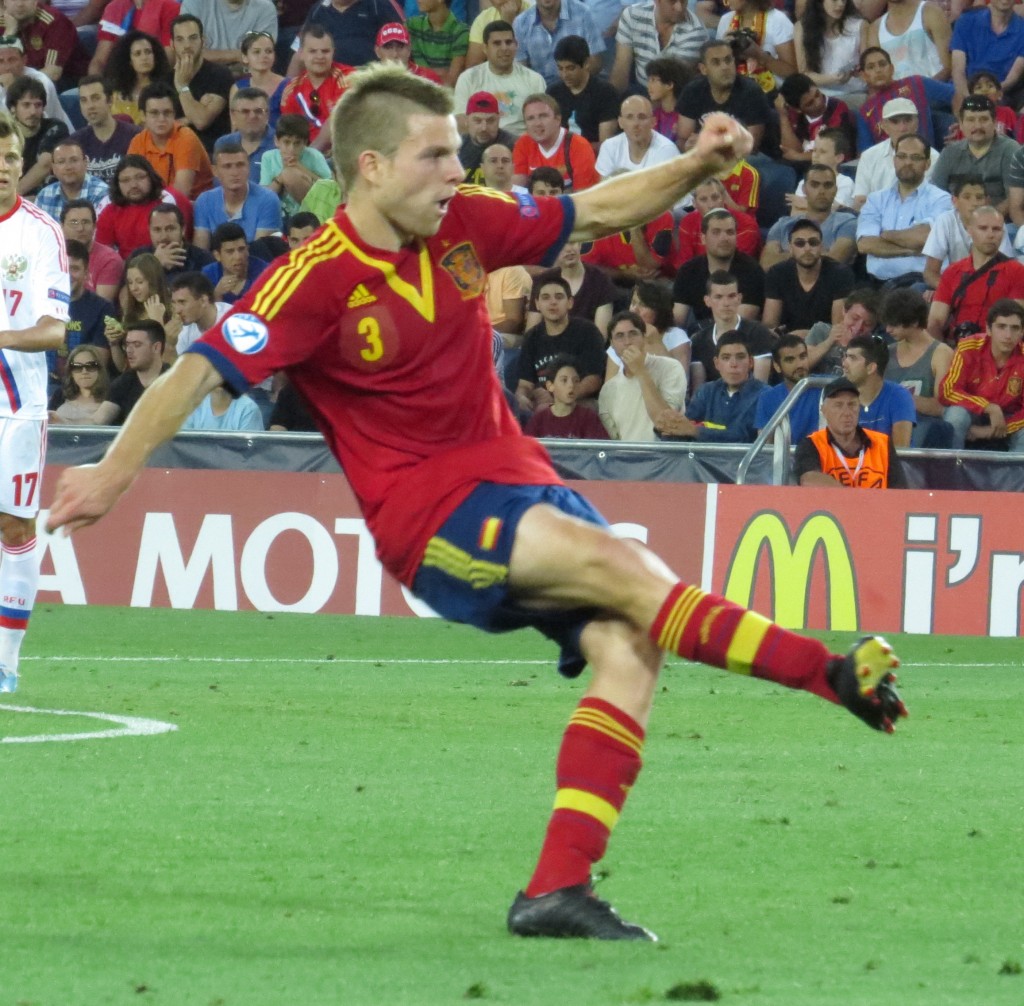 Illarramendi: should we be shopping in Spain come January?

Leander Dendoncker (RSC Anderlecht)
Anderlecht is currently showing Europe that Belgium is the new hotbed for youth football. Anderlecht may be leading the charge, but youth football in Belgium is now currently right up there with Germany when it comes to an endless stream of young players and Leander Dendoncker is surely one of the best and brightest to emerge as of late. Despite Youri Tielemans being younger and more spoken of, Dendoncker is the keystone of the Anderlecht midfield. At just twenty years old, he’s officially a full Belgian international, and performances against Tottenham in the Europa League suggest that he could be ready to make the leap to a more difficult environment. Being brought through a youth system that thrives on putting footballing intellect and mental strength at the core of its training regimens, Dendoncker exhibits a maturity beyond his years (he’s got the goods with his feet as well) and his recent cap for Belgium lends weight to the argument that he is ahead of the curve. Though Anderlecht will be in the hunt for yet another Jupiler League title and a place in the Champions League, it could be hard for the youngster to turn down a move to a league where so many Belgians have found a happy and successful home. Belgian practice states that youth players must remain in-country till the age of eighteen usually, and seeing as how he is passed that, it would be tough for the club to turn down enough money considering their plethora of able youngsters who can replace him in due course.