In Part 1, Drew looked at possible replacements we could look at in the January Transfer window; Simon takes on the topic of who we might have at the club already in this blog; and Luke’s article will look at a bit of both.  Enjoy and come back tomorrow for part 3.

There are three things certain in life: death, taxes and Arsenal fans demanding the club sign a defensive midfielder.

In all honesty, this piece could have been written a year ago.

In fact, it could have been written at any point over the last five seasons. But perhaps now more than ever the calls for a new defensive midfielder in January are stronger than they have been before. It is all very understandable as like a baby with candy, Arsenal have tasted what they want and crave more.

That taste has come in the shape of Francis Coquelin’s progress into the first-team. A year ago the Frenchman was playing for Charlton. Now his absence through injury has sent Twitter into a meltdown.

Arsenal supporters never take bad news well, in truth very few football fans do. But it does seem as though any discouraging injury news regarding an Arsenal player is met with a vicious backlash from the club’s fans.

Why didn’t we buy in the summer? How do players keep getting injured? Is Arsène Wenger really the man to resolve the problems?

Those questions circulate on Twitter with the regularity of the earth orbiting the sun but it doesn’t get away from the fact that Wenger really is at a major crossroads.

Make no mistake about it, Francis Coquelin was and is a massive part of Arsenal’s first-team.

The protection he has provided for the defence since his emergence has led to improved performances for Laurent Koscielny and Per Mertesacker.

Likewise ahead of him, Coquelin’s discipline has allowed his midfield partner Santi Cazorla to shine as the Spaniard has been able to let the shackles off.

The same can be said for Mesut Özil, with many of the German’s countless assists this season coming as a direct result of Coquelin winning the ball.

But now for the bad news. Coquelin is out for at least two months.

As was mentioned earlier, revelations like this are never well received by Arsenal fans. But in attempt to spread some positivity and joy this piece will hopefully provide some light to the darkness consuming Twitter.

The first and only question really is, what next for Wenger?

The obvious and immediate thought is to spend. Get the chequebook and throw money at the situation. But this is Arsenal. This is Wenger. We all know that will not be the case.

So if we can’t look out, then we have to look in. Solutions can often be found by closer examining what you already have, take Coquelin for example.

In the summer of 2014 he was ready to leave, back from a loan at Frankfurt he was disillusioned with life at Arsenal.

“I always had hunger, I knew if I got the chance I was ready for it. I just needed the chance,” said Coquelin.

“It was always going to be a bit of luck. In the pecking order there were a lot of players in front of me.

“They all got injured at the same time. That’s why I came back and I’ve played so many games. It’s down to a bit of luck but I was ready for it.”

Through an injury crisis not too dissimilar to the one the club face now, Coquelin finally got his chance at Arsenal. 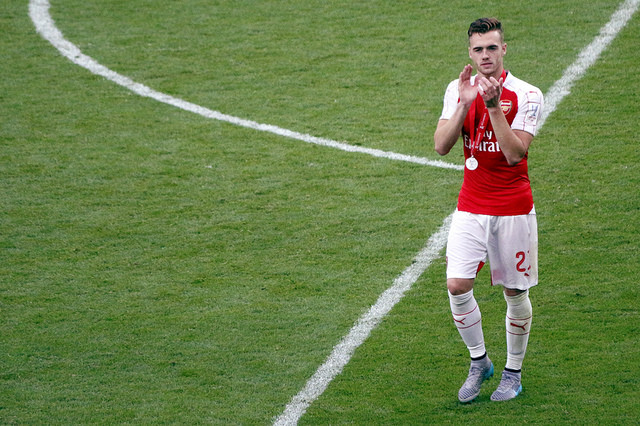 Could Chambers step up into the holding midfielder role? credit: DSanchez17 under license

Almost a year to the day Wenger was forced to think on his feet and give someone a chance who he had perhaps previously overlooked.

The Frenchman can claim that he always saw a future for Coquelin but without last year’s injury crisis that future may never have come a reality.

The success of looking in rather than out and discovering a defensive midfielder before, leads to the conclusion that Wenger may well do the same now.

There are six or so weeks until the transfer window opens and a packed festive fixture list, so even if Wenger wanted to get the chequebook out now he can’t.

Instead, in reality, he has two options. Promote a like-for-like replacement or make tactical allowances for Coquelin’s absences.

The first of these solutions will no doubt fill Arsenal fans with dread. Mikel Arteta and Mathieu Flamini have both been brilliant servants of the club but their ability on the field is now questionable. Just look at the fact that both players’ contracts expire at the end of the season with the club hardly desperate to tie them down.

So why not give youth a chance? Re-enact the circumstances of last year and trust a player who has his fair share of doubters.

Eyes were raised when Coquelin was given his opportunity, now they’re full of tears.

Personally the likes of Krystian Bielik are not ready yet in my opinion. The Pole is very highly-rated by the club’s academy coaches but physically he still needs time to develop. There is every belief he will be a first-team player but right now maybe just a year or so too early.

And so it is time for Calum Chambers to step forward. Up the road Eric Dier has been nothing short of a revelation for Tottenham in the defensive midfield role and it is something that should inspire Chambers.

As a youngster, there are not the same pressures by playing in front of the back-four as opposed to in the heart of the defence. That costly slip does not necessarily lead to a goal as behind you there is cover and experience to mop it up.

Such freedom has allowed Dier to flourish at Tottenham. Naturally he is inclined to sit anyway due to his defensive mentality, but with a stable back-four behind him he has also been able to dictate games.

There is quite simply no reason Chambers cannot do the same. He is equally as impressive in possession and like Dier he has a sound defensive knowledge.

Arguably Arsenal’s best ever defensive midfielder, Gilberto Silva, started out as a centre-back and it did his development the world of good. It taught and enabled him to understand what protection the defence needs. If you’ve been in that exposed state you can comprehend exactly what the back-four need when it comes to protection.

Such a new role for Chambers will naturally take time. But in all honesty there is little else Arsenal can do. The transfer window is still a month away and Arteta and Flamini do not have the athleticism to cope with the Premier League anymore.

So is it time for Wenger to give youth a chance and allow an undervalued player to shine?

He did it with Coquelin and that didn’t work out so bad, did it?

Simon Collings is a Regular Columnist here at #ABW – check him out on Twitter at @sr_collings.  He is also part of a Premier League Podcast called All About the 3 Points which we definitely think you should check out.