In Part 1, Drew looked at possible replacements we could look at in the January Transfer window; in Part 2, Simon took on the topic of who we might have at the club already; and in this blog, Luke will look at a bit of both.  We hope you enjoy!

Following the news that Francis Coquelin’s knee injury will keep him out for “at least two months” the problem arises – what can Arsenal do to survive his absence?

Last season, Coquelin was recalled from a loan spell at Charlton and thrown into the first team as a last resort and went from strength to strength. Coquelin’s emergence also coincided with Santi Cazorla’s new role as a deeper sitting playmaker which saw Arsenal finish the season 3rd and retain the FA Cup.

Since the new season started Coquelin has also shown consistent improvement, being more composed on the ball whilst still keeping up the standards he set last season of winning the ball/intercepting dangerous passes when out of possession. Arguably last season this system, although effective, made Arsenal look a bit blunt. In a lot of games Arsenal struggled to carve out chances because of the previous reliance of Ramsey having the freedom to get higher up the pitch afforded to him because of the passing and dictating abilities of Mikel Arteta when on the ball, but since the new season a lot of adaptation has been on show, dominating teams and creating chances at will whilst having the two midfielders still sitting deeper than in previous years, but now that Coquelin will spend a time out what is the next plan? 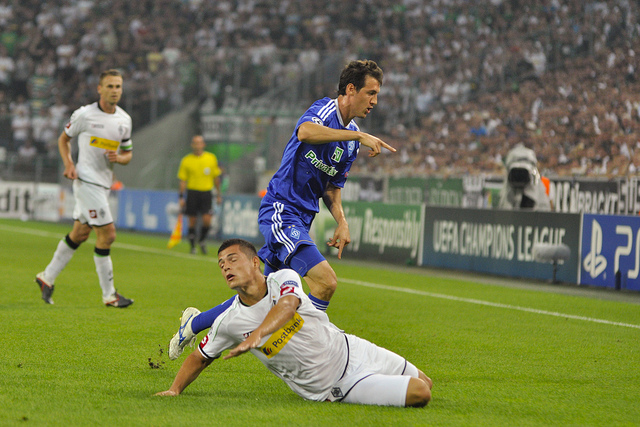 Xhaka is a Switzerland international who plays in the German Bundesliga for Borussia Mönchengladbach. At 23 he’s at a good age where he has a lot of first team experience and has great scope to improve. He also showcases good passing ability partnered with the intelligence to be able to drop in-between the centerbacks allowing them to split which would compliment Wenger’s preference to get both wingbacks high up the pitch to support attacks and create width. It could also open the door to Aaron Ramsey being introduced back centrally next to him in his preferred box to box role, but Xhaka is also experienced in playing in roles similar to the role Coquelin has next to Cazorla, pushing higher and winning the ball up the pitch. One con could be a tendancy to lose his temper at times, resulting in silly fouls/cards.

Badelj is much more of a playmaker than a ball winner, but at 6”1 he’s not frail like many of his counterparts that share similar vision and technical ability, he also shows a willingness to go into the challenge rather than shy away from it. He has a very impressive composure and ability to dictate possession/play the ball out from the back. It wasn’t until late into the 2014 summer transfer window that Badelj made his move from Hamburger SV to Fiorentina for a fee of 5 millions euros but since then, he’s grown tremendously as a player – helping Fiorentina to an impressive current 3rd place in Serie A, only 2 points off 1st place Inter Milan. And at 26, he can still improve.

Bruno is the only conventional defensive midfielder of the 3 mentioned, and also unlike the others at the age of 31 is entering the twilight of his career, but in terms of the next 12-18 months would likely be the best option to slot straight into the team and play to a high level. He’s had 6 caps for Spain and is currently captain of La Liga club Villarreal and epitomizes leadership, taking responsibility for everything around him with intelligence and guile. He is rarely not in the right defensive positions, organising those around him to play at the same standard, and when on the ball controls the game from the base of midfield. Many would argue he’s deserved a higher platform for a long time to showcase his talents.

Until January (or even beyond then if the summer transfer window is anything to go by) Wenger will have to make do with internal options, though, but with what seemed to be 2nd choice defensive midfielder Mikel Arteta now also out with a calf problem it leaves Arsenal seemingly barren in the position.

The obvious choice would be Mathieu Flamini as he’s the most experienced central midfielder in the current squad who is match fit. Flamini was seemingly out in the cold in the summer with strong links that he’d follow Podolski to Galatasaray but nothing materialised and Flamini has waited patiently for his chances. A very impressive performance which included a brace against Tottenham in the league cup hasn’t been capitalised on in the months since but he’s proved in the past to have an impressive underdog mentality and did have an effective partnership with Ramsey when he re-signed in 2013. 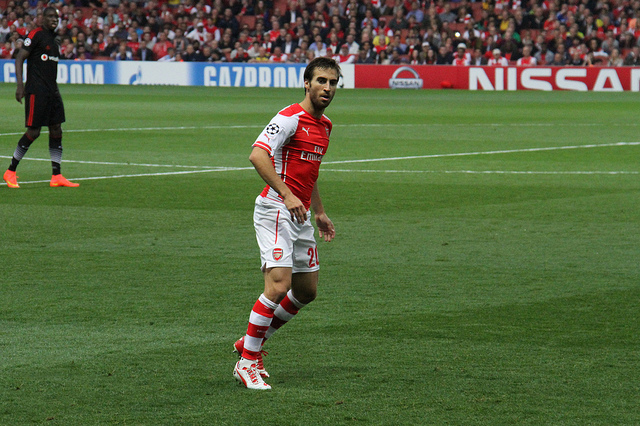 Unleashing the Flame is an option. Credit: Ronnie Macdonald under license

Another option is right back turned center back Calum Chambers. Chambers has shown a good ability on the ball that he’s learnt through graduating from the Southampton youth academy and his time at Arsenal. Chambers would probably lack the agility and tenacity to recreate Coquelin’s role next to Cazorla, though, and would be more likely to play a more conventional sitting defensive midfielder role. Wenger said on Monday that Chambers has been “educated as a midfielder” insinuating he would be open to trying the young Englishman further up the pitch.

Our under 21’s team also seems lacking for options, although highly rated Polish player Krystian Bielik is another that some may put the spotlight on. Since signing from Legia Warsaw last January many speculated he’d be fast-tracked into the first team but that hasn’t happened as of yet. At 17 years old Bielik is already 6”2 so could potentially have the physicality for the position and showed a few promising touches in his cameo vs Sheffield Wednesday, but as he’s been playing as a center back for the youth team this season I’d assume his development is still in the early stages.

We hope you enjoyed our series outlining some of the internal options, as well as possible transfer targets.  Make sure you hit up all our bloggers on Twitter if you have questions or feedback.  Luke (@LukeisPremium) is one of our newest bloggers – go give him a follow.