Here and Now for Joel Campbell

Rewind back to the 16th of September last season – Arsenal are set to take on Jürgen Klopp’s Borussia Dortmund at Signal Iduna Park and a young and untested Héctor Bellerín was given the nod at right-back. A recent injury to France international Mathieu Debuchy thrusts the young Spaniard into the fray against one of the best counter-attacking teams in Europe. Come the end of ninety minutes, Arsenal run out 2-0 losers and Bellerín put in a display that did him no favors when it came to proving to Arsène Wenger and the supporters that he was ready for first-team football. But if you fast-forward to the present, you would be hard pressed to find a single Gooner, anywhere, that would not tell you with absolute confidence that Bellerín is the best at his position in the Premier League. One match does not make a career the same way that one page does not make the entire book…it is how you build and progress that counts.

With the Arsenal injury bug rearing its ugly head as of late, Le Prof finds himself thin at the forward positions. Theo Walcott and Alex Oxlade-Chamberlain are both out until after the international break, and added to Danny Welbeck remaining on the treatment table until what is likely the new year, the boss really only has Alexis Sánchez still available from his list of preferred first-team players. There have been calls in the past for Joel Campbell to get his chance over the past two seasons, and with injuries to key personnel, there has certainly never been a better opportunity for him to reach out and snatch it with both hands.

The Costa Rican international certainly is capable – impressive loan spells at both Real Betis and Olympiakos (who can forget that fantastic strike against Manchester United in the Champions League) gave us a bit of insight into just what he is capable of. Further proof would be levied two summers ago in Brazil, as the then 22 year old led an unexpected charge that not only saw Los Ticos top a group that was comprised of Uruguay, Italy and England, but make it all the way to the quarterfinals where they lost out to the Louis van Gaal’s Netherlands on penalties.

Campbell was instrumental, even talismanic for his country in a tournament where no one really expected them to make an impact, and it appeared that he would finally get his chance at the Emirates…but it was not to be. Speculation would run rampant all summer about his future with the Gunners, and he was heavily linked to a move to Portugal. To make matters worse, he would only go on to run out for the club three times during the entire season but would feature on sixteen occasions for Spanish club Villareal, registering just a single goal.

So just what is it about Campbell that people love so much? Perhaps it is a bit of that fairy tale feel he all gave us two summers ago, perhaps it’s because he is just only 23 years old and seemingly still has so much to give, or perhaps we as fans do not want to admit his project failed. Never-the-less, despite all the uncertainty and many asking if he is even good enough for the club, Campbell’s performance at the weekend against Swansea did more than just reignite a fire under his cause, it gave us all the impression that perhaps, just maybe, that he is truly ready to take his chance. 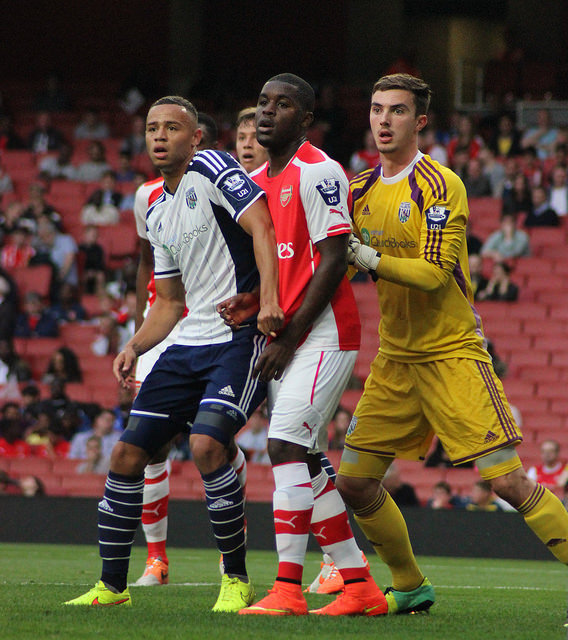 Is now the time for Joel Campbell? Credit: joshjdss under license.

Despite a twenty minute spell in the first half where he disappeared from the proceedings (though it must be said that he was a complete livewire in the opening twenty-five), it must surely be said that the Costa Rican international put in a very good, and maybe even a complete performance…one which he rounded off the scoring with a peach of a goal. His work rate off the ball was something our right-flank was not used to receiving from its winger, and he could routinely be found fighting to regain possession and tracking back to help out the aforementioned Bellerín who was under pressure for much of the first-half – when it was all said and done, Campbell’s heat map shows him popping up in every area of the pitch with the exception of Nacho Monreal’s zone of control. He may have only had thirty-seven touches, but the four attempted tackles (more than anyone sans Monreal), the two interceptions (both in our half of the pitch), and the five blocks lend further weight to the notion that he provides the defensive contribution and added protection for Bellerín that perhaps Ox, Walcott and even Aaron Ramsey are not capable of.

The only question that creeps into the back of my mind (and surely, the mind of others, especially here at ABW), is if his offensive contributions from the right would be good enough. He’s surely no Walcott, and while Theo is doing well in his new role as a center-forward, the England international did provide quite a few goals from the flank. Campbell seems much more similar to Ox in that he is willing to put a shift in and take players on when he’s on the ball, but the goals seem to be lacking. All told, Campbell has only netted eighteen goals in 145 total appearances (four at Lorient, two at Real Betis, eleven at Olympiakos, one at Villareal and one at Arsenal). Despite being an attacking mainstay for his country, he’s only found the net ten times in fifty appearances for Costa Rica, including once at the 2014 World Cup. With the goals largely coming from Walcott, Olivier Giroud and Alexis Sánchez (fourteen out of our twenty-one league goals and four out of our five in Champions League), it’s time for Campbell to show that what he brings to the discussion table is not just his work ethic.

His strike to round out the goals at the Liberty Stadium on Saturday showed us his ability to finish a chance could be lying dormant and ready to be unleashed (his excellent curling effort in the first-half that narrowly missed Łukasz Fabiański’s far corner was another example of his potential eye for goal), and further goals such as the one against United in Europe and his effort against Uruguay in the summer of 2014 give us a few other examples to mull over in discussion – but the time for discussion is over, and it’s now become a put up or shut up moment for San Jose-native.

Unlike Bellerín, Campbell is not afforded months of time to settle and go from strength to strength in his performances as Walcott and Chamberlain will be available after the break – he truly only has a matter of weeks before he could potentially go right back down to being the fourth choice wing option at the club. He’s put one good showing in the books, but good will likely not be enough, and with Bayern Munich away in the Champions League and the North London Derby next weekend, perhaps there is no better time to show us all that not only is he ready to contribute, but that he can do it in matches that matter more than most.

Football is a simple sport, but most of all, it’s a sport of chances – one chance to make the right pass, one chance to make a brilliant save, and one chance to put the finishing touch on an attacking move. Campbell’s recent goal and performance stands as a marker for perhaps his entire professional career to date – does he progress from here or was it just a one off? Either way, it’s do or die for Joel.