Laurent Koscielny signed for Arsenal in July 2010 for a reported fee of £10m from French club Lorient. Coming here he was much of an unknown quantity, only signing for Lorient from Ligue 2 club Tours in July of the previous year, but Koscielny made great strides that season earning rave reviews in France and being closely watched by Wenger. Koscielny endured a difficult start to English football, mixing flashes of potential with a struggle to adapt to the physicality of the premier league – some Arsenal fans lambasted Wenger for signing a ‘lightweight’ Koscielny instead of Christopher Samba or Scott Dann but since then Koscielny has won over the entire fan base.

In modern day football one of the most scrutinized positions is the growing breed of ball playing centerbacks. These are centerbacks that aspire to be more than the majority of their predecessors, concentrating not just on defending when off the ball and recycling the ball into midfield but actually having a genuine impact on the attacking side of the game, whether that be from being on the ball or through split second ball retention.

This sums up Koscielny perfectly – he is a high risk, high reward defender, he’ll look to tackle as soon as Arsenal loses the ball, take the ball into space, and have the initiative to cover a team-mates position if he feels it’ll minimize the danger on goal. This is what makes Koscielny special but unfortunately it’s also what gives him his biggest criticism from those looking in from the outside. Koscielny is a victim of the standard highlight reel, how many great tackles do we see on Match of the Day or Skysports News? Pretty inconsistent, I’d say. How many times is it played over and over whilst being magnified under analysis when a defender makes a mistake? Literally every time. When you actually watch the game you see the consistent brilliance that Koscielny brings. He’s saved us on countless occasions, but like all defenders of his breed eventually he will make a mistake. 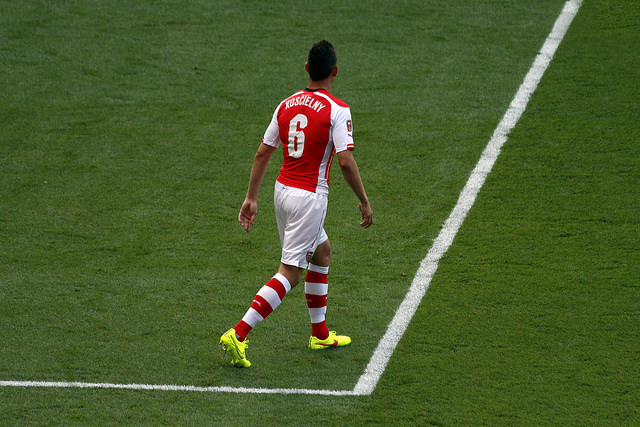 Koscielny has also proved on multiple occasions that he can put his ambition to the side if the game demands it to focus on basic and effective defending. Multiple games in the last year have been epitomised by an Arsenal squad that have learnt to be more rigid and pragmatic, in many games this philosophy is lead by the Frenchman. 2015 has seen Arsenal go to Manchester City, keep a clean sheet and winning 2-0 (ending their 12 match unbeaten streak), they out clean sheeted Chelsea to win 1-0 at Wembley in the charity shield just before the season started and recently winning 2-0 in a crunch match at the Emirates against Bayern Munich, the first time Bayern have failed to score in a Champion’s League group game since December 2011 vs Man City and the first match they’ve failed to win all season. In that game it’s fair to say Koscielny made Lewandowski, the most in form striker in world football, look absolutely bobbins.

Koscielny also makes an impact at the other end of the pitch when needed. He scored the winning goal vs West Brom on the final day of the 2011/12 season which ended up lifting us over Tottenham into 3rd place (just for Chelsea to hilariously winning the Champion’s League rendering 4th place useless). He scored the winner vs Newcastle on the final day of the 2012/13 season to secure 4th place and he scored the equalising goal in the most stressful FA cup final ever vs Hull, a catalyst moment in going on to break the trophy drought.

To go with all that, he’s proven to be a master in reading the game.  Last season Koscielny made a whopping 93 interceptions – over double what John Terry (32), Gary Cahill (27) or Vincent Kompany (45) made.

The bottom line is how can Koscielny not be considered world class? He bases his whole game around having the ability to take high reward risks and consistently pulls them off, he defends off the ball, can help progress our play when on the ball and has the mentality to score in the big games when we need it most. It’s not just a coincidence he’s been linked with Bayern Munich, Real Madrid and Barcelona since signing for Arsenal and he looks like he’s still getting better and better.