6/10 – Most of his evening though was spent struggling to contain the opposition. [London Evening Standard]

6.5/10 – Almost scored with fizzing left footer, beyond that unspectacular. [Arseblog]

The above player ratings come from September 2013 as Arsenal were dumped out of the Capital One Cup by Chelsea.

They are all for the same player; Nacho Monreal.

It seems odd to now read such words, which come across as more of an obituary than an assessment of an individual’s performance.

It is safe to say that September night two years ago was not Monreal’s finest hour and nor for that matter was that season.

By the end of the campaign the left-back had chalked up just 1176 Premier League minutes. He was comfortably playing second fiddle to Kieran Gibbs and there were even those who wondered why Arsène Wenger had signed the Spaniard.

That, in truth, was an easy question to answer. Finding an upgrade on André Santos was never going to be difficult but when Arsenal landed Monreal for £8.3m in January 2013 it was believed that they had found more than that.

The defender came from Málaga with a growing reputation.

Spanish football expert Sid Lowe remarked how Monreal was: “tidy, well-positioned, decent on ball and a steady full back.”

Graham Hunter also sang the left-back’s praises: “He will add some defensive stability to Arsenal. There is no question Monreal is going to add steel and urgency, he is a creative player when he gets forward. He is absolutely top European class.”

And Andy West iced the cake by saying: “Monreal is an excellent ball-playing full-back with a solid all-round game both defensively and going forward, and at the age of 26 he’s coming into his prime.”

On the face of it, for £8.3m, Arsenal had grabbed an absolute bargain.

However the deal had perhaps come too early for all parties.

Arsenal had actually wanted to conclude a transfer in the summer. They had been scouting Monreal since the start of the season and positive reports were constantly returning to London.

But, Wenger was keen for the defender to arrive in the summer and utilise the time of pre-season to acclimatise to Premier League football. It would also allow Monreal time to settle in England and get to know his new team-mates.

Time is, however, a luxury that often cannot be afforded in football. Just take a look at the merry-go-round of managers and you’ll appreciate that point.

So when Kieran Gibbs suffered an injury the day before the January transfer window shut, Arsenal accelerated the deal.

Cash-strapped Málaga were forced to sell and within 48 hours of signing, Monreal was making his debut against Stoke City. Welcome to England, Nacho.

As we have seen the start was not as rosy as the messrs Hunter, Lowe and West predicted. The fact that the deal had happened so fast understandably explained some of the reasoning for this. 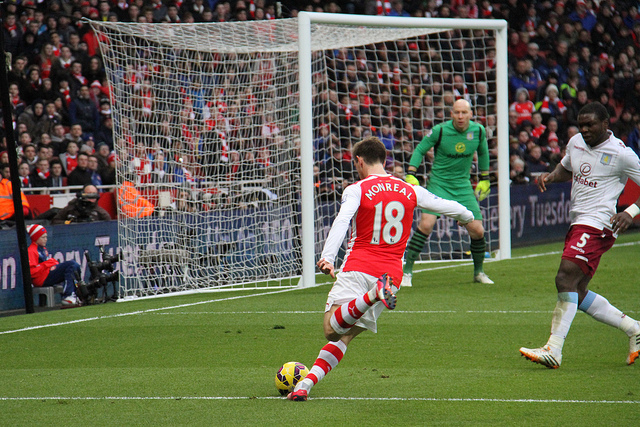 There was also the form of Gibbs though, who when he returned from injury reminded fans why England were now considering him as the heir to Ashley Cole.

Monreal was going to have to fight for his place.

And fight he did, to the point that by the end of last season he had accumulated 2311 minutes of Premier League action. Gone were the murmurings of discontent and gone were the calls for Gibbs to be first choice.

Monreal was showcasing all the attributes that had been lauded on him. Calmness, grit, determination and an ability to get forward – this is why Wenger had paid £8m.

Those talents are once again on show this season and this time Monreal has not missed a minute of Arsenal’s Premier League campaign.

Alexis Sánchez and Mesut Özil may be claiming the headlines but the reliability and solidity of Monreal cannot be underestimated.

Against Bayern Munich he handled the imperious Thomas Müller with relative ease, while Manchester United’s big-money signings failed to unnerve him either during the 3-0 win.

It makes you think just how far Monreal has come since his arrival in the winter of 2013.

We often say about players need timing to adapt but when you consider Monreal grew up in a village of 300 people then London really was a big step. A reality the Spaniard willing admits.

“It was a massive change, very big, but you do it for football – that’s just the way it is,” Monreal confessed in an interview earlier this year.

“I consider myself to be an easy-going and flexible lad, so I got used to it without too much of a problem. I settled in well, immersing myself in the place, getting to know the city, getting to know London and a different culture, too.

And give 100% Monreal has, for few can argue against the boy from Pamplona’s meteoric rise. The “timid” defender is now Arsenal’s Mr. Reliable.