Jack Wilshere – The Turning of the Tide

Bit of an impromptu series this week as completely unscripted, the guys decided to send in blogs on players returning from injury.  Here’s Luke’s blog on Jack Wilshere and check out Jake Arsenal’s (@JakeArsenal1) piece from earlier this week if you haven’t already. – OG

With Jack Wilshere seemingly edging closer and closer to full training and hopefully a return to team contention the question is what impact could he play in the final part of the season?

It’s been a long time since Wilshere burst onto the scene in a season highlighted by an amazing performance vs Pep’s Barcelona (arguably the best club team of all time). At this point we all thought Jack would be a mainstay in the squad, breaking 200+ games and one of our most important players – but injuries have written a different and cruel story so far. Wilshere has only managed 169 games in the years following his debut in 2008 against Blackburn and since his breakthrough season in 2010/2011 it seems our expectations for him have been slowly but surely dismantled piece by piece.

It feels like most of the Arsenal fan base has almost factored Wilshere out of this season because of his continuous and relentless setbacks in recovery following a hairline fracture from a Gabriel Paulista challenge in training, cruelly ruled him out of the Charity Shield. To add to the woe, this was after Wilshere seemed to have a fruitful pre-season – he returned earlier than most Arsenal players to training and got a good amount of playing time, being used in both the central attacking midfield and right midfield positions before being cut down right before the season began. The key is getting Wilshere fit to play a real role for the latter stages of the season and if we can, he could prove a huge factor in the title race.

Not only is Wilshere’s talent plain to see but it’s his amazing amount of variation that could see us over the line – he can play next to Coquelin in the midfield pivot in a technically similar but more physical style than Santi Cazorla has done before his injury, he can also play as the #10 which alleviates pressure from Mesut Özil and means we have a good option to play in games we don’t have the mercurial German available. But perhaps most important of all is he has all the attributes needed to play as a wide playmaker – and it’s these kinds of options that we need to keep the team balanced and also to create new balanced combinations too.

A lot of our early season success was based on a system that was changeable if need be, we played a standard 4-2-3-1 but because Ramsey was on the right flank it allowed us to change seamlessly to a 4-4-2 or a diamond mostly because Ramsey is smart enough and technically assured enough to play as the winger, as the right sided midfielder in a bank of 4 or to tuck in as the right side of a narrow diamond. Since Cazorla’s injury, through necessity, Ramsey has been moved back onto the central pivot and although that is undisputedly his best position (from an individual performance perspective), it’s left the team unbalanced in many games with our midfield lacking that extra player that can help establish and maintain control over the midfield and forces us to stick almost permanently in the 4-2-3-1 shape, making us more predictable in attack.

“He is a special case because he is a special talent and he comes out of the club. And he is an England international and I hope his injuries will stop at some stage.” 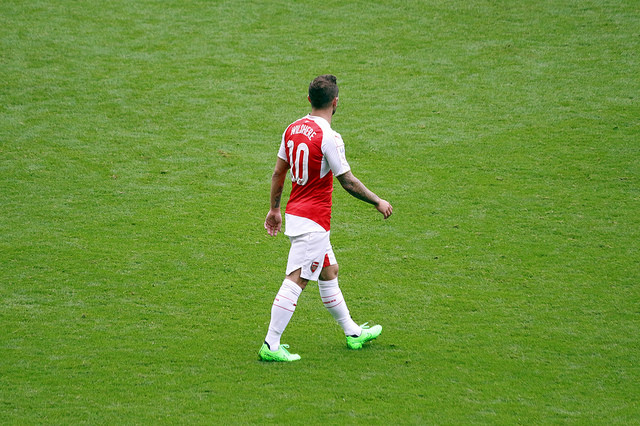 Can Jack give us a Spring boost towards the title? Credit: DSanchez17 under license

Time for Arsène to tinker again?

This current Arsenal team is full of players that most people have doubted and vilified but Wenger has been proved right by believing in them – Francis Coquelin, Joel Campbell, Laurent Koscielny, Per Mertesacker, Nacho Monreal, Aaron Ramsey, Olivier Giroud and Mesut Özil have all been scrutinized in the past but other than Campbell these are players that have shaped the scene for us winning back to back FA Cups in the last two seasons; which included notable improvement on our performances against the top teams and Wilshere could definitely be the next addition to Arsène’s list of resurgent underdogs.

Last season Wenger moved Cazorla to center midfield, re-established Coquelin into the squad and adapted Ramsey to a right flank – three decisions that ultimately went a long way in our change of fortunes.

Wenger has faults that he’s criticised for regularly but one of the things he excels at is being able to find balance in Arsenal squads when we look at our most mediocre. Whenever our backs are against the wall, Wenger will find solutions to avoid the often predicted worst case scenarios. The hope now has to be that given the position we’re currently in, if we can regain form with the players coming back, it gives Wenger enough options to change things up again in an attempt to give us a new lease on life for the rest of the season. Wilshere ticks so many boxes in different roles/positions it gives Wenger so many more possibilities to structure the team.

Is it finally time for Jack and Ramsey to play together?

For years it seems like Wenger has wanted to play with his two best British midfield prospects but has never truly found the formula – now could be the perfect time. Wilshere being introduced as an option to compete with Joel Campbell and Alex Oxlade-Chamberlain for the right wing spot could revive the variation we had earlier this season by adding a stylistic element we’ve been lacking since Cazorla was injured and Ramsey was taken off the right wing. Chamberlain to play when we need a direct ball carrier, Campbell to play when he need a wide forward who will move into spaces in and around the box and Wilshere to help control games and use his adept ability to bring players into play.

You could also speculate that the inclusion of Jack could help the form of Ramsey, Özil and Giroud. Wilshere being in the team puts less strain on Özil to vacate attacking positions as much to receive the ball like he has in recent months, but also all of the aforementioned players work best with close and quick, precise and creative passing exchanges – something that is arguably Wilshere’s most impressive attribute.

Wilshere has dynamism in abundance and can adapt to meet the needs of the team, as he’s proved for England by playing as the deepest midfielder – a position he had little to no previous experience in. Despite that he still earned 6 man of the match awards in 7 international games, capped off with 2 brilliant goals to save England vs Slovenia. He can control games, receive the ball, dictate tempo in deep areas, carry the ball over long distances, cover ground defensively, create space against packed defences and show true fight in the face of adversity – all of these are invaluable attributes.

In a season where it seems no team can truly take initiative and create a point gap at the top of the league, Jack Wilshere can be the driving force that pushes us forward for the rest of the season.