Laurent Koscielny’s Rise to the Top

At a time when the wolves are baying for the blood of Gabriel Paulista and Per Mertesacker it is perhaps worth remembering Arsenal’s other centre-back.

Laurent Koscielny has undeniably been one of the club’s stand-out performers this season and you dread to think what state the defence would be in had he sustained a long-term injury.

Even against Barcelona, the best team on the planet, the Frenchman held his own against Lionel Messi until two late sucker-punches dented an otherwise exemplary first-half.

Such a level of performance has now become the norm for Koscielny and it is perhaps why he is often not given the praise he deserves.

Along with Nacho Monreal, Koscielny has given the Arsenal back-four a sense of stability that has been severely lacking in years gone by.

And all this from a man who cost just £8.45m – a quarter of what Manchester City paid for Eliaquim Mangala.

The somewhat reasonable fee is an indication of where Koscielny has come from.

As a youngster the Frenchman broke through the ranks at Guingamp as a full-back. The Ligue 1 club has a good history of providing youthful talent with a chance to shine, as shown by the careers of Didier Drogba and Florent Malouda.

However, despite making nearly 50 appearances in three years, the 21-year-old Koscielny was not entirely happy. He viewed himself as a centre-back and one who was capable of playing at the highest level. Guingamp disagreed.

It left Koscielny in a catch 22 – did he remain at a club playing top tier football or move elsewhere so he could play in his preferred position? The young Koscielny chose the latter and it turned out to not be a bad decision in the end.

The options, however, were limited for the Frenchman as he opted to ply his trade elsewhere. A major sticking point was persuading a club to sign a player who had spent three years as a right-back and now wanted to play in the middle.

Finally an offer did come as Tours made an approach.

They were happy to play Koscielny as a centre-back, despite being impressed by his expertise as a full-back. It did mean, however, a drop down to third tier of French football.

The Champions League looked a long way away. 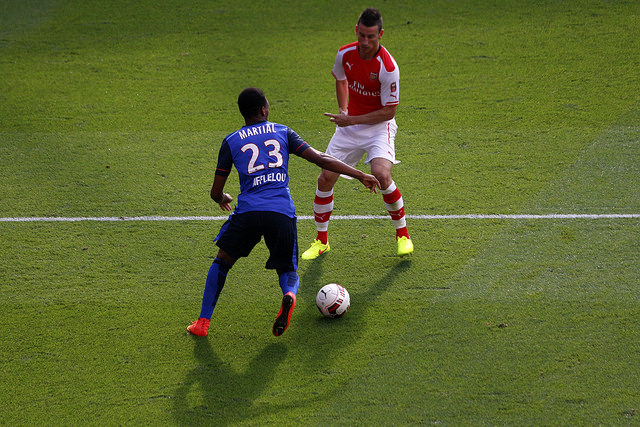 Dave has developed into a world class talent. Credit DSanchez17 under license

Never one to shirk a fight, Koscielny put pen to paper and made the switch. His impact was immediate and instant. Tours gained promotion to Ligue 2 and the following season they held their own once again. Koscielny, too, more than held his own as he was named in the Ligue 2 Team of the Year for 2008/09 season.

One of the sides who had come up against the centre-back that season was Lorient. Unlike Tours, they had gained promotion to Ligue 1 and they had one thing on their mind – bringing Koscielny with them.

Unsurprisingly Tours realised they couldn’t stand in Koscielny’s way and three years after he had left Guingamp for the third tier, the Frenchman was back in the top flight.

However, there was another team sniffing around the promising defender at that time too.

The then-manager of Tours, Daniel Sanchez, had phoned Arsène Wenger during the 2008/09 season to notify him about a player on his books. Clearly intrigued, Arsenal sent scouts to watch Koscielny and the reports back were glowing. However it was also agreed that he needed one more move as the jump from Ligue 2 to the Premier League would be simply too great.

Thankfully Lorient gave Koscielny the experience he needed but it came as no surprise that after just one season in Ligue 1, Wenger was now calling. The Arsenal boss had seen enough, it was time to pounce.

Initial negotiations bounced around as a fee was haggled over. The idea of a £4m offer plus Francis Coquelin was mooted, but in the end Wenger opted to part with £8.45m (€10m).

Over the years it has without doubt proved to be money well spent. Of course it took time for Koscielny to adapt to the English game but he has since become one of Europe’s finest defenders.

It is no surprise that the likes of Bayern Munich and Real Madrid constantly monitor the 30-year-old’s availability.

And all of this from a player who a decade ago dropped down to third tier of French football because he was so sure in what position he should play.

Today, Koscielny has been vindicated in his decision and Arsenal fans must be so thankful that he never doubted his talent.