The date, February 28th 2016, the fixture, Manchester United away from home – notoriously a tough game for The Arsenal. Thousands of die hard Gooners making the trip to cheer the team on in the hope of building on the dramatic late winner vs Leicester City just a short time ago. What happened over the course of the 95+ minutes of football has left many loyal fans once again disillusioned, crest fallen and in truth, broken.

As the host of the ‘ABW Radio’ Show I get an instant reaction from many fans of differing backgrounds, from those who attend games on a regular basis to those who watch from home and of course from fans overseas, some of whom skip work or get up at a ridiculous hours to take in the matches – I feel for them especially after this game.

Touching briefly on that game, I don’t want to go over all the same ground that many have trodden since, nor do I wish to write a match report – but what I do want to address is the lack of passion, desire and will to win amongst this group of players.

We are told by those close to the squad that the moral has never been higher, the bond is strong and every player is willing to fight for one another, OK, that’s great, but why, as fans are we not seeing this where it counts most, the pitch. The way the team start big games is so often without urgency, with an attitude of ‘Well we are high level Footballers, we’ll win regardless.’ I simply cannot accept this and neither can many. 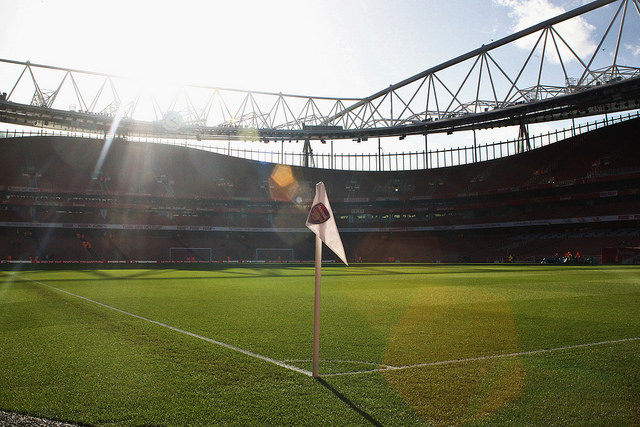 Arsenal are at the crossroads of their season. Credit joshdjss under license

Yes, we are The Arsenal, a club that should be feared by every opponent but the sad fact is, watching performances like we did at Old Trafford suggests that opposition teams, managers and supporters see it a very different way – they see us as what we are currently: a soft touch, an opportunity, a perfect opposition to get at and more often than not, beat.

A defeat like this only highlights the problems at every level the club currently have, those that follow me or interact with the shows I appear on will know I am always positive, looking to find fair excuses or reasons why the team have let us down again, the truth is performances like this are indefensible, not from the Manager, the Players, nobody.

I don’t subscribe to the ‘WOB’ or ‘AKB’ arguments, I have supported and will continue to support this magnificent club for as long as I am around – 24 years to date and never once have I questioned this desire. I hold Arsène Wenger in the very highest regard for everything he has done and continues to do for the club, but that does not mean he is flawless, nor does this mean he should escape criticism for his failings – of which he has many which I am sure he would be the first to admit.

So, where does this leave our season? Well, in my opinion, as tough as it is to comprehend, it leaves us in a position to come out fighting and win this title! When you have stopped laughing let me explain why. To quote Agent Mulder, I BELIEVE!

Looking at the current Premier League table we lay five points from the top, trailing Leicester City and who should be directly above us? Our greatest rivals Tottenham Hotspur, who, if you needed reminding are two points above us at time of writing. It would also be foolish to rule out Manchester City who occupy 4th place on forty seven points and have just had the boost of winning the Capital One Cup at Wembley. They also have a game in hand on all three clubs above.

Over the years of watching Arsenal it seems the times they really turn up the heat and come out fighting are always the times you least expect it. I think back to those last minute races for 4th (yes, I know, not exactly winning silverwear, but still). I also cast my mind to clawing back Manchester United’s seemingly unassailable lead in 1998, where at this very time we trailed by no less than twelve points!

Granted, that was then, this is now, and our form has been so patchy of late it’s difficult to see us stringing together that run of wins to turn the tide, however, this group of players undoubtedly have it in them to do exactly that. Having the bottle or heart for a fight, to win those games where you don’t play well, or have decisions go against you is something the likes of The Invincibles had by the bucket load. I truly believe this current crop DO possess the same qualities. I look at the likes of Per Mertesacker, Nacho Monreal, Mesut Özil, Petr Čech and the soon to be fit Jack Wilshere, even a Francis Coquelin type of player – a man who had to scratch and claw his way in to even having the chance to prove himself in an Arsenal shirt. Surely these players can dig deep and prove many wrong – personal pride, hunger for a place in the Club’s history and most importantly a title winning medal simply has to light a fire now. 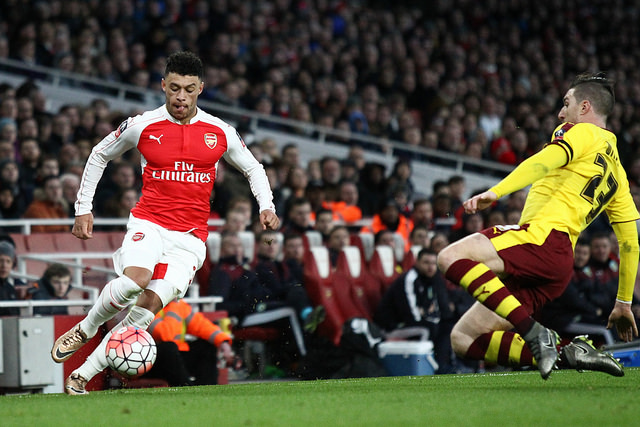 Ox is out, but there is quality in the side to respond. Credit joshdjss under license

The manager also comes heavily into the spotlight, a man who’s desire to prove many wrong galvanises him to keep putting faith in players he truly believes in. His ability to lift these players is now so key, vital in fact, the time to shout and scream is now. If there was ever a time where I would gladly see Arsène go postal on a player for losing possession in a key area or missing a simple chance it’s now! Old fashioned bollockings are not always the answer, but there is only so many times you can put an arm around an underperforming player and only so many excuses you can take before a relationship is broken. Mr. Wenger, if that magic hat is still in the cupboard, now is the time to dust it off.

So that’s the motivational side addressed, now the fixtures. Arsenal have a tough looking set of away fixtures – Tottenham, Everton, West Ham and Manchester City leap off the page. But we are not alone in this. An all conquering Lecicester City side, whilst impressive thus far, face not only the pressure of being arguably favourites to win the title but also face games against strugglers West Brom, Swansea, Newcastle and Sunderland, all of whom may need points to remain in the top flight. Couple that with trips to Manchester United and Guus Hiddink’s Chelsea.

Tottenham face a different challenge – the ability to keep key players fit and firing for the duration of the season whilst balancing a Europa League campaign and a grueling Pochettino style of play at the same time. I look at the North London derby looming and see that as pivotal for both clubs in truth. The momentum of a win for them is unthinkable right now, a tough looking trip to play bitter rivals West Ham away three days earlier might just benefit ourselves. Elsewhere fixtures away at Liverpool, Stoke, Chelsea and Newcastle are as tough as ours, coupled with home ties against Manchester United and Southampton.

Finally, Manchester City may have the toughest task ahead, craving Champions League glory and a Manager desperately looking to leave with credit in the bank to attract his next employer. Away trips to Liverpool, Chelsea, Southampton and Swansea look tough, whilst home games against Manchester United in the derby and a Stoke side set up to counter attack also appear tricky.

Looking at the big picture, Santi Cazorla, Tomáš Rosický and now Alex Oxlade-Chamberlain are the only players out injured, there is more than enough quality within those fit to really get a run together.

The biggest motivation for everyone should be that this season represents the best chance in many years to secure another League title. We have heard this said so many times but now is the time to unite as a group, supporters and players, regardless of where you stand on the Manager and hierarchy of the club. That argument is best for another time – right now we have to be the fabled 12th man and the players have to grit their teeth and really show what they are made of, now is when it counts. As tough as we make things I truly believe we can win this title, Arsenal Football Club, it’s over to you!

Kris is an #ABW Panelist and Radio Show host, go give him a follow on Twitter (@AFCfreddie8).