All this week, we’ll be bringing you our Regular Columnist’s Season Previews including our ideal XI’s, star and breakout players, thoughts on transfer dealings, and season predictions (Check out Simon’s from yesterday). Čech had ups and downs in his first season at Arsenal and you could blame him for goals like Bolasie’s last minute equaliser in the latter stage of the season but in general you could really see the calm and influence he gave to the defence. In previous years we haven’t had this and I expect Čech to grow into this season rather than diminish through age.

The rise of Bellerín has been meteoric to say the least, from a horror show against Dortmund to the biggest right back prospect in the world. At times he is wasteful in terms of crossing but he creates such an impressive number of chances and never shirks his defensive responsibility. His conversion to right back from winger will surely end up going down as another Wenger masterstroke.

It’s genuinely very frustrating when you hear how underrated Monreal is outside of the Arsenal fanbase. Last season he was arguably our most consistent player, week in week out gave brilliant and effective performances. He reads the game and influences build up play a fantastic amount for a wingback and his discipline gives Bellerín more influence to get forward. A simply brilliant wingback.

In the Euro’s Koscielny really showed the level he can truly play at and I’d expect him to continue his consistent improvement year on year going into this season with a more settled team balance ahead of him. Koscielny is master interceptor, can carry the ball into midfield and breaks lines through vertical passing which is a huge merit to the team. The sheer amount of ground he covers for others is astonishing too.

There’s a lot of talk about Arsenal’s search for a new centreback and on evidence it is greatly needed. Injuries to Mertesacker (reportedly 4 months out) and what looks to be a potential long term injury to Gabriel in our last friendly vs Man City on Sunday evening has surely forced Wenger’s hand. Until a new centreback is found I would assume the next choice is Chambers. Chambers has looked shaky in the past as he learns a new trade at centreback but impressed for England youth at the Toulon tournament in the summer and has all the tools to be a modern ball playing defender. The biggest thing for him is getting the minutes needed to truly develop.

I think this guy could prove a huge player for us. He’s young and through that he’s obviously flawed, I expect him to pick up yellows for fun but he fills an absolutely massive need that we lacked last season, a natural first phase passer. Xhaka showed for Switzerland that he’s more disciplined playing in front of a back 4 than a back 3 which should fill fans with even more hope. Xhaka’s stats for tackles and interceptions last season were very impressive and he showcases a fantastic passing range. As soon as Cazorla got injured last season we lost all fluency in our build up play, Xhaka gives us that in abundance.

There’s been a great deal of speculation about who would partner Xhaka in the pivot and I think Xhaka/Ramsey could take the Arteta/Ramsey mould to the next level. Last season Xhaka played next to Dahoud who played a similar box to box role as Ramsey and it was very effective. Ramsey suits moving into spaces to receive the ball and Xhaka suits finding people through vertical passes through the lines and sprayed to the wingbacks. Both their abilities to win the ball could prove to be a really dynamic pair.

I feel in the right midfield position we need more of a facilitator than a forward. Someone that can drop into the midfield to link up play and help control the game by balancing off the very direct Alexis on the other wing. This time last season Iwobi was doing just that vs Lyon in the emirates cup and since he broke into the first team in the latter stages of last season he’s shown he has a real knowledge of great movement across the midfield to receive and recycle, along with very promising technical ability and an eye for goal.

Özil was the catalyst of everything good in our play last season. The game flows through him with guile and ease. He’s one of the only players that see’s better passes in the heat of a game than any of us can see watching the whole pitch on TV. The task for us now is setting the team up to let Özil stay as close to the opposition box as possible, let him be the areas he’s so dangerous in. My hope is the pivot of Xhaka/Ramsey will greatly help to accomplish this.

Last season Alexis became a bit stale on this side but after looking refreshed with a stint on the opposite wing he showed what he can truly do on the left hand side for Chile in the Copa America. Alexis was at his best last season when he was allowed to join the central striker in the diamond shape that saw us put in very impressive displays last season. It’s imperative that we don’t rush him back to the extent of last season, him burning out towards the end of 2015 ended up being a huge loss.

Another area of great speculation in the transfer market for us in the centre forward spot and while I do think Giroud is much over vilified for very good and consistent displays I do also agree that he isn’t a world class striker and shouldn’t be expected to lead our line for the entirety of the season. All of that aside Giroud is a 20+ goal a season striker, covers so much ground, has truly outstanding one touch link up play and gives us a dimension that so many fans were screaming out for before he signed, an aerial threat. I expect Giroud to play a big role in our season although I do hope we get in a striker that can take pressure off of him. 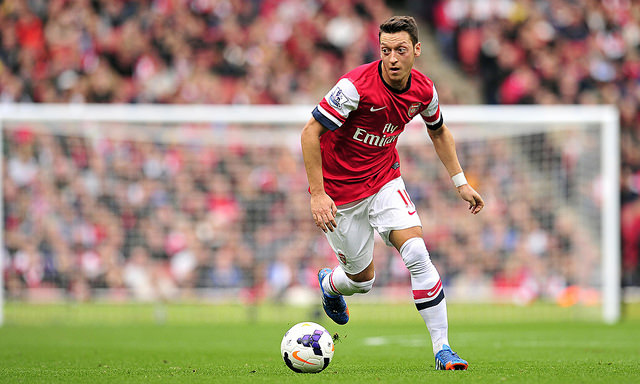 Özil is expected to impress again this season. Credit: Brian Sikorski under license

I don’t think I can pick anyone else in honesty, his play epitomises the Arsenal way. He see’s everything and as long as the team is balanced around him and has quality I can foresee nothing except him giving us even more virtuoso displays next season.

You could argue that Iwobi has already broken through but I do believe this season he could really push on and become a first team regular. Iwobi shows promising attributes technically, mentally and physically. He’s a willing learner and I have great faith he’ll do what the team needs of him. If he improves this season as much as he did during last season we could be seeing a player of real quality.

The consistent theme in all summer transfer windows in recent memory is we’re always one or two players short of what is believed to be a “complete side”. This window is no different and we’re still waiting to see a top class centreback and centre forward walk through the door to give us real hope for challenging this season. Injuries to Mertesacker, Gabriel, Welbeck and the recent admission from Theo Walcott that he’d rather go back to the right wing position he’s always been trying to get away from puts this into the red zone for importance. Wenger’s stance this time does feel very different to recent years where he’s had aging and rarely fit players to deter his focus now it seems like he realises that these two signings are absolutely integral and I’m fairly confident we’ll see two more through the gates before the window closes.

All of the doubt aside there’s a lot working in our favour. Chelsea, Manchester United and Manchester City are all in transition, Leicester and Spurs have to account for the fixture-list juggernaut that is Champion’s League football and although Liverpool look impressive it’s still reasonable to believe they’re a season or two off having a side truly capable of challenging at the top of the league. We have a settled squad with consistency and chemistry and a great pool of refined youngsters to choose from that are far better educated than recent classes of our youth. A lot will depend on our remaining business in the transfer window but I see many reasons to be positive and say we can take advantage of the problems of those around us to challenge and win the Premier League.