All this week, we’ll be bringing you our Regular Columnist’s Season Previews including our ideal XI’s, star and breakout players, thoughts on transfer dealings, and season predictions.

Best XI (WHEN EVERYONE IS FIT) With every member of Arsenal’s squad fit and available this is the 11 I would go for. New signing Granit Xhaka has looked superb in pre-season and after shelling out around £30m to bring him in from Borussia Mönchengladbach, he must go straight in. Aaron Ramsey, with his abundance of energy, would compliment the Switzerland international well in the middle of the park and it is perhaps an option that Wenger will want to consider.

The back four, as it did last season, picks itself – but further forward there is more scope for debate. The right spot of the attacking trio behind the frontman is a particular area of uncertainty, with Danny Welbeck my preferred option when he returns to full fitness. His pace and power is difficult to match – and there is also the small matter of his knack of chipping in with crucial goals.

Of course with all this there is the rather large caveat of Arsenal’s injury troubles, which have already reared their ugly head again this season. Per Mertesacker and Welbeck are likely to miss most – if not all – of the upcoming campaign and so changes will have to be made.

With that in mind, I would allow Calum Chambers the chance to finally cement his spot in the first-team at centreback. The youngster has struggled so far since joining from Southampton, but so did a certain Laurent Koscielny when he first arrived and look how he turned out. As for Welbeck’s replacement, Alex Oxlade-Chamberlain is the man I would bring in. He has bags of talent and if he is finally given a run in the team, in the same position, he may explode into the player Arsène Wenger believes he can be.

For me, there isn’t a better sight than watching Mesut Özil grace the turf at the Emirates. He is like an artist, with the pitch being the canvas upon which he paints footballing perfection. He has his fair share of critics, but I think you will struggle to find a better attacking midfielder in Europe.

Özil finished with 19 assists last season and judging by his display at Euro 2016 he is likely to rack up a few more in the coming 12 months. As I write this, it has hardly been a summer of big spending from Arsenal and that will only add to Özil’s importance to the team. People can marvel at Alexis Sánchez’s athleticism and physique, but it is Özil who makes Arsenal tick.

The only worry will be if the German has the necessary firepower ahead of him to feed. We saw last season that Olivier Giroud cannot be continually flogged like a dead horse. He is human and as such he will burn out and go through the goal drought we witnessed last season.

A new striker for Giroud to rotate with would not only help him, but also Özil. He needs options and an alternative to what he had last season could see him step up to an even higher level.

I have no doubt that Özil will be Arsenal’s player of the season, regardless of whether the club sign a new striker or not. But a new forward really could take him towards a different dimension that Arsenal supporters are yet to see so far.

Jeff Reine-Adelaide’s promotion to the first-team this summer tells you all you need to know about how highly Arsenal rate him. When he burst onto the scene at last year’s Emirates Cup there was an awful lot of hype surrounding the 18-year-old. Many predicted that he could become a part of Arsène Wenger’s plans then and there, but in reality it was always going to be too soon. 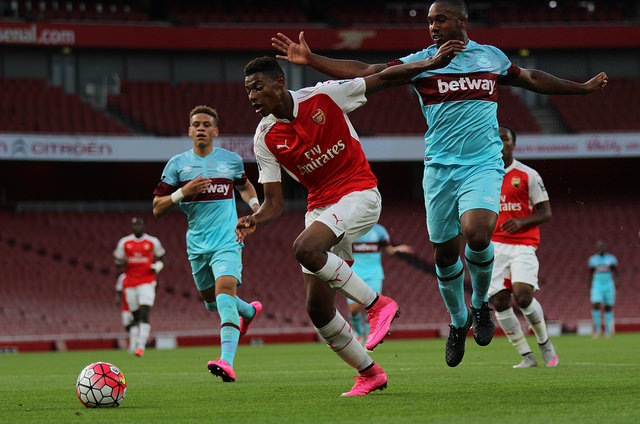 Could it be The Jeff’s year? Credit joshjdss under license

However now, with an extra 12 months of development under his belt, Reine-Adelaide really could have an impact on the first-team squad. Blessed with the ability to play anywhere behind the striker, the Frenchman’s adaptability will make him a useful option off the bench.

If he were to sneak into the team, Reine-Adelaide should look to target the right-hand side of the XI – where uncertainty surrounds just who will claim the starting spot. Alex Iwobi looks as though he may currently have the shirt and he is a perfect role model for Reine-Adelaide to be looking up to.

The Nigerian was not a name mentioned by anyone last summer, but when the opportunity presented itself during the season he took his chance in spectacular fashion. Given Arsenal’s injury record it is not unlikely that such a scenario will present itself to Reine-Adelaide in the coming year and, if it does, he should be ready to seize it. And given what we have seen of him so far, I am sure he won’t hesitate to do so.

Well, where to begin? Frustration is probably the best word to describe Arsenal’s summer spending and I was almost tempted to simply copy and paste what I wrote this time last year because once again it is the same scenario.

Just as they did 12 months ago, Arsenal started the summer well with a brilliant purchase. A year ago it was the acquisition of Petr Čech from rivals Chelsea, this time it was the purchase of talented midfielder Granit Xhaka from Borussia Mönchengladbach.

Both signings were viewed as statements of intent, a marker of what was to come. However, so far it seems to be a case of déjà vu.

Arsenal failed to kick on from bringing in Čech and as I write this – on 7th August – they are yet to do so after snapping up Xhaka. A new striker and centreback are desperately needed, with the latter a grave concern after Gabriel joined Per Mertesacker in the treatment room.

The new striker will most likely come in the shape of Lyon hitman Alexandre Lacazette. Arsenal have laid so much groundwork for the deal and for it to go south now would be very frustrating for all involved – especially after the Jamie Vardy fiasco.

At the back, Shkodran Mustafi seems to be the name on everyone’s lips but I would not be surprised if Arsène Wenger targeted a more experienced centreback. Koscielny’s pace and strength make him the perfect partner for a wise, old head and it’d be no shock to see the club look for someone in that mould.

It is always difficult to make this prediction when there are still a few weeks to go in the transfer window. But even with the expected signings that are likely to come in, I still have Arsenal coming just short in the hunt for the Premier League title.

Like last season, I fully expect the side to be battling throughout the campaign and, even if fans like to have a moan, there can be no denying the talent in the squad. Every club would bite your hands off to have the likes of Petr Čech, Laurent Koscielny, Alexis Sánchez, Mesut Özil, etc among their ranks.

The worry is, of course, injuries and a look at the squads of Manchester City and Manchester United make me think they will be fighting for the top two spots. The amount of money they have spent this summer is simply on a different level to Arsenal and it provides them with a level of depth that is hard for anyone to match.

Of course, we saw last season how anything is possible and with Wenger seemingly entering his last year at Arsenal it would be nice to have a fairytale finish. A lot, in my opinion, will depend on Arsenal’s start. There is an uneasy atmosphere around the Emirates and a bad beginning could lead to an air of toxicity spreading among the supporters – something Wenger, nor the club, can ill afford.