Serge Gnabry and Arsenal: What does the future hold?

Two and a half months ago I came to the defense of Joel Campbell and why the stars aligned for him to take his chance at Arsenal and cement a place in the first-team. With recent events ending in him being loaned out to Portuguese giants Sporting Lisbon, and the likely full move away from the club that is surely on the horizon, another door (yet under different circumstances) has been opened for a different wide player who has yet to show what he is capable of – Serge Gnabry.

Born in the Porsche capital of the world, Serge David Gnabry was born to an Ivorian father and a German mother. Despite showing great natural ability in sprinting, he joined TSV Weissach at the age of five to begin his footballing education. Stops at GSV Hemmingen, TSF Ditzingen, SpVgg Feuerbach and Stuttgarter Kickers would come before the big move; to hometown club and storied Bundesliga outfit VfB Stuttgart in 2006 at the age of 11. During his five years with Die Schwaben, Gnabry gained a reputation for being one of the brighter talents in his age group, resulting in his breaking into the German U-16 side in 2010 and earning himself five appearances. It was then that Arsène Wenger and Arsenal would come calling.

Completing a £100k move to the Emirates in 2010, he couldn’t officially move to England until the age of sixteen (per UEFA rules) in 2011. His first year at the club saw him bedded into life in North London, which included impressive displays for the U-18’s and much the same for the reserves upon his promotion through the ranks.

The following season saw the diminutive German promoted to the first-team. Still only 17-years old, his development was handled carefully rather than throwing him into the dogfight straight away – he would go on to make four appearances; once in the League, once in Champions League and twice in the League Cup. Continuing to impress, further faith was placed in Gnabry’s ability the following season, where he made a total of fourteen appearances (nine of which came in the League, as well as scoring a goal) and was nominated for the European Golden Boy Award. 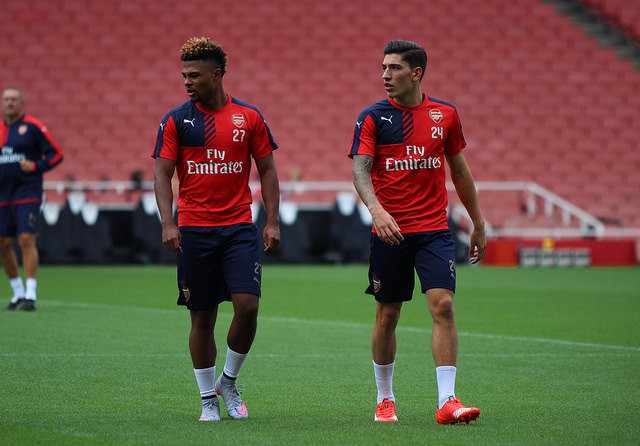 Gnabry started brightly in North London at the U-18 and Reserve levels before breaking into the first team.  Credit joshjdss under license.

Unfortunately for the emerging German talent, his career would come to a screeching halt soon afterward.

A serious knee injury would see him miss the entirety of the 2014-15 League program, and even though he did feature sporadically for the U-21’s, it must be seen as a massive setback in his development. A loan to West Brom last season, where he only featured once in the league, rounds out his time at the club thus far – one where for a player of his ability, certainly will be seen as a bit of a letdown.

Before we press on, it’s worth noting that, despite his lack of first-team football over the course of his senior career, Gnabry has been routinely selected for the German youth national team. All told, he’s made 57 appearances from U-16 all the way up to the U-21’s, including this summer during the Rio Olympics. And it’s this summer’s performances that have given Arsène a moment of pause.

Six goals in five outings in Brazil, a joint-top scorer at the tournament, and he’s received a whole heap of praise from his national teammates as well as Le Prof.

“I want to keep Serge Gnabry and extend his contract. I think we stood by him. He went to West Brom, didn’t play; we had to rebuild his confidence. I allowed him to go to the Olympics to help Germany. I think he’s here now for a long time.” – Arsène Wenger

On the surface of it, Wenger seems to be prepared to give Gnabry the chance that his ability deserves. As a player, he certainly fits the mold of a player that we need. Incredibly quick, very strong on the ball physically, of a high technical standard deemed the requirement by Wenger, direct, positive going forward and possessing an absolute howitzer from outside the box, Gnabry is very much the type of wide player we have been missing.

This summer has gone a long way to prove what everyone involved in the German footballing community has already known – he’s the real deal, and he is good enough to be starting for this club…but will he?

“He’s shown everybody what he can do. I’m just annoyed he’s never shown (enough) faith by his club. You can see what an important player he can be and the kind of level he can play at. Now hopefully he can get in the team and get opportunities to play.” – Horst Hrubesch; German U-21 manager

“Two matches and three goals in the Olympics. Now you’re showing the world again what a talented football player you are.” – Mesut Özil

One of the many level-headed criticisms that can be levied in the direction of our Alsatian headmaster is that he doesn’t rotate the squad sufficiently enough. A second observation, one that we are all too familiar with, is that Wenger insists on putting faith in Theo Walcott (or even Aaron Ramsey) as the answer to our problem on the right-hand side. Despite the emergence of Alex Iwobi last season, when the squad is fully fit, it’s tough to see Wenger dropping Walcott, and if he did, it would likely be for Alex Oxlade-Chamberlain.

So where does Gnabry fit in? The answer is on the the left side of the attack.

Though he’s predominately right-footed, Gnabry is actually a left-sided player who prefers to cut in centrally to have a look at goal, much in the same mold of Alexis Sánchez. No one would argue that Gnabry should be selected ahead of the Chilean energizer bunny, but making him Sánchez’s understudy and first-choice replacement when rest and rotation are needed could certainly get the player back on track to progress in his development. This move would also allow Wenger to potentially loan out the aforementioned Iwobi as well as Jeff-Reine Adelaide, two young wide players who have bags of talent but really should be seeing first-team football in the Championship to mature if they aren’t going to feature for the Club on a somewhat regular basis.

There are two other options left to Wenger; loan Gnabry to a club where first-team minutes are guaranteed (unlike at The Hawthorns last term), or sell him on for the good of his career in the long term.

Recent links have surfaced of clubs showing interest. Hertha Berlin has expressed an interest to bring the player in on loan, and considering their lack of wide player options this could potentially be ideal. The other bit of interest comes from the rumor that fellow German U-21 teammates Davie Selke and Lukas Klostermann have been trying to convince Gnabry to switch London for Leipzig and join them in the Die Roten Bullen revolution at RasenBallsport Leipzig. Both clubs could certainly use his services in the Bundesliga, and considering German clubs play young players regardless of age as long as they are thought to be good enough, this could be the ideal scenario if minutes at Arsenal cannot genuinely be guaranteed.

Will the young German get a chance at the first team this season? Credit joshjdss under license.

Though the sentiments shown by Wenger in saying he would like to keep Gnabry at the club for a very long time are probably genuine, it’s tough to believe that the French legend will make good on his promise to include him as an important piece of the puzzle moving forward. Wenger is under pressure to spend on first-team additions via the market as is. He’s also been afforded the luxury of having quite a few talented wide players coming through the ranks, all of whom eventually need to be given time in the first-team. Lastly, Sánchez, Walcott, Ox, Welbeck (when he’s fit) as wide options are already in the first-team. Will Gnabry genuinely get his chance at the club? Will he need three years of loans until he finally is trusted enough? Yes there is a small current window that could see him come back from the Olympics and feature, but I for one see it as unlikely, and he’ll probably be chucked out on loan.

For the good of his development, and with respect to the bags of ability that he does indeed have as a footballer, the time will eventually come where he may have to throw a gauntlet down and say play me or sell me. This is where I return to Joel Campbell.

He divided opinion amongst the fan base sure, but Campbell, when called upon last season, seemingly did enough to warrant additional trust…yet it never came. As such, he’s been loaned out yet again and has expressed his desire to leave the Club so that he can get back to playing regular football. My fear for Gnabry is that this could become his reality in the not so distant future.

In closing, the most we can do as a collective fan base is hope that Gnabry comes back from Brazil, already in the form that he is in, and is inserted into the first-team to add something fresh, exciting, and needed. But the fear will be another loan spell away from the Club (which could result in a formal transfer bid based on his performances), or worse, relegation to training with the first-team but never actually featuring for it.

So I say to you, Serge Gnabry, the best of luck this season, whether if you’re with us or out on loan – but never be afraid to be selfish and put the good of your career ahead of your sentiments for a club.